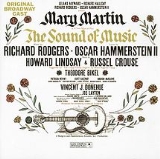 The original Broadway
Broadway theatre
Broadway theatre, commonly called simply Broadway, refers to theatrical performances presented in one of the 40 professional theatres with 500 or more seats located in the Theatre District centered along Broadway, and in Lincoln Center, in Manhattan in New York City...
production, starring Mary Martin
Mary Martin
Mary Virginia Martin was an American actress and singer. She originated many roles over her career including Nellie Forbush in South Pacific and Maria in The Sound of Music. She was named a Kennedy Center Honoree in 1989...
and Theodore Bikel
Theodore Bikel
Theodore Meir Bikel is a character actor, folk singer and musician. He made his film debut in The African Queen and was nominated for an Academy award for his supporting role as Sheriff Max Muller in The Defiant Ones ....
, opened on November 16, 1959; the show has enjoyed numerous productions and revivals since then. It was adapted as a 1965 film musical
The Sound of Music (film)
Rodgers and Hammerstein's The Sound of Music is a 1965 American musical film directed by Robert Wise and starring Julie Andrews and Christopher Plummer. The film is based on the Broadway musical The Sound of Music, with songs written by Richard Rodgers and Oscar Hammerstein II, and with the musical...
starring Julie Andrews
Julie Andrews
Dame Julia Elizabeth Andrews, DBE is an English film and stage actress, singer, and author. She is the recipient of Golden Globe, Emmy, Grammy, BAFTA, People's Choice Award, Theatre World Award, Screen Actors Guild and Academy Award honors...
and Christopher Plummer
Christopher Plummer
Arthur Christopher Orne Plummer, CC is a Canadian theatre, film and television actor. He made his film debut in 1957's Stage Struck, and notable early film performances include Night of the Generals, The Return of the Pink Panther and The Man Who Would Be King.In a career that spans over five...
, which won five Academy Awards.

In the very first version of the movie, was there a dead dog put on the steps on the Von Trapp's mansion as a warning to the captain to join the Nazi ...
More

...the first three notes just happen to be, Do-Re-Mi. Do-Re-Mi-Fa-Sol[pronounced So]-La-Ti, oh let's see if I can make it easier.[singing] Doe, a deer, a female deer, Ray, a drop of golden sunMe, a name I call myself, Far, a long, long way to runSew, a needle pulling thread, La, a note to follow SolTea, a drink with jam and bread, that will bring us back to Do...

The hills are alive with the sound of music...

You are the twelfth in a long line of governesses who have come here to look after my children since their mother died. I trust you will be an improvement on the last one. She stayed only two hours. Oh, there's nothing wrong with the children. Only the governesses.

Fräulein, is it to be at every meal, or merely at dinnertime, that you intend leading us all through this rare and wonderful new world of... indigestion?

[singing] How do you solve a problem like Maria?How do you catch a cloud and pin it down?Many a thing you know you'd like to tell her, many a thing she ought to understand...How do you hold a moonbeam in your hand?

Radiance that floods the screen...and warms the heart!

The more you see it, the more it becomes one of your favorite things!