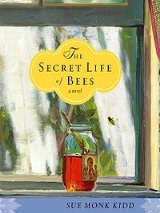 The Secret Life of Bees is a 2002
2002 in literature
The year 2002 in literature involved some significant events and new books.-Events:*March 16: Authorities in Saudi Arabia arrested and jailed poet Abdul Mohsen Musalam and fired a newspaper editor following the publication of Musalam's poem The Corrupt on Earth that criticized the state's Islamic...
historical novel by American
United States
The United States of America is a federal constitutional republic comprising fifty states and a federal district...
author Sue Monk Kidd
Sue Monk Kidd
Sue Monk Kidd is a writer from the Southern United States, best known for her novel, The Secret Life of Bees.- Biography :Kidd, who was born in Sylvester, Georgia, graduated from Texas Christian University with a B.S...
. It received much critical acclaim and was a New York Times bestseller. It was nominated for the Orange Broadband Prize for Fiction
Orange Prize for Fiction
The Orange Prize for Fiction is one of the United Kingdom's most prestigious literary prizes, annually awarded to a female author of any nationality for the best original full-length novel written in English, and published in the United Kingdom in the preceding year...
and was adapted into a 2008 film
The Secret Life of Bees (film)
The Secret Life of Bees is a 2008 American drama film, adapted from the novel of the same name by Sue Monk Kidd. The film was directed by Gina Prince-Bythewood and produced by Will Smith, with his wife, Jada Pinkett Smith, as executive producer. The film is noted for Queen Latifah's critically...
by Gina Prince-Bythewood
Gina Prince-Bythewood
Gina Prince-Bythewood is an American film director and writer. Her primary credits as a director include the films Disappearing Acts and Love & Basketball, produced by Spike Lee and starring Omar Epps and Sanaa Lathan, which won her the Independent Spirit Award for Best First Screenplay.Bythewood...
.
Lily Owens is a fourteen-year-old white girl, searching for her identity through her deceased mother's past.

For an upcoming assignment where I am to persuade why a popular contemperary novel should be in the Literary Canon, I have a question regarding this p...

How does Lilly Reveal the secret of how she feels about har father in the letter she tears up?How is this helpful even though she doesn't send it? ...
More
x