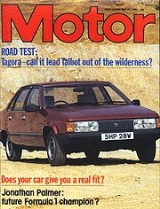 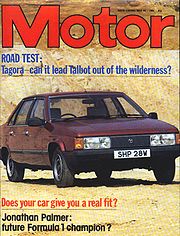 The Motor (not to be confused with the American Hearst Corporation
Hearst Corporation
The Hearst Corporation is an American media conglomerate based in the Hearst Tower, Manhattan in New York City, New York, United States. Founded by William Randolph Hearst as an owner of newspapers, the company's holdings now include a wide variety of media...
trade publication, or the Australia
Australia
Australia , officially the Commonwealth of Australia, is a country in the Southern Hemisphere comprising the mainland of the Australian continent, the island of Tasmania, and numerous smaller islands in the Indian and Pacific Oceans. It is the world's sixth-largest country by total area...
n magazine of the same name) was a British
United Kingdom
The United Kingdom of Great Britain and Northern IrelandIn the United Kingdom and Dependencies, other languages have been officially recognised as legitimate autochthonous languages under the European Charter for Regional or Minority Languages...
weekly car magazine
Automobile magazine
An automobile magazine is a magazine with news and reports on automobiles and the automobile industry. Automobile magazines may feature new car tests and comparisons, which describe advantages and disadvantages of similar models; future models speculations, confidential information and "spyshots"...
founded on 28 January 1903.

The journal was absorbed by its rival Autocar in 1988. For a brief period after the takeover by Autocar, the name lived on as the magazine was called Autocar & Motor; however, the Motor name was dropped soon afterwards.
The source of this article is wikipedia, the free encyclopedia.  The text of this article is licensed under the GFDL.