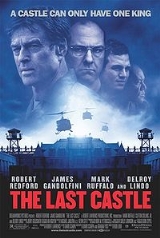 Overview
The Last Castle is a 2001 American drama film
Drama film
A drama film is a film genre that depends mostly on in-depth development of realistic characters dealing with emotional themes. Dramatic themes such as alcoholism, drug addiction, infidelity, moral dilemmas, racial prejudice, religious intolerance, poverty, class divisions, violence against women...
directed by Rod Lurie
Rod Lurie
Rod Lurie is an Israeli-American director, screenwriter and former film critic.-Early life and career:The son of internationally syndicated cartoonist Ranan Lurie, he was born in Israel but moved to the United States at a young age, growing up in Greenwich, Connecticut, and Honolulu,...
, starring Robert Redford
Robert Redford
Charles Robert Redford, Jr. , better known as Robert Redford, is an American actor, film director, producer, businessman, environmentalist, philanthropist, and founder of the Sundance Film Festival. He has received two Oscars: one in 1981 for directing Ordinary People, and one for Lifetime...
, James Gandolfini
James Gandolfini
James J. Gandolfini, Jr. is an Italian American actor. He is best known for his role as Tony Soprano in the HBO TV series The Sopranos, about a troubled crime boss struggling to balance his family life and career in the Mafia...
, and Mark Ruffalo
Mark Ruffalo
Mark Alan Ruffalo is an American actor, director, producer and screenwriter. He starred in films such as Eternal Sunshine of the Spotless Mind, Zodiac, Shutter Island, Just Like Heaven, You Can Count on Me and The Kids Are All Right for which he received an Academy Award nomination for Best...
.

The film portrays a struggle between inmates and the warden of the prison, based on the United States Disciplinary Barracks
United States Disciplinary Barracks
The United States Disciplinary Barracks is a military prison located on Fort Leavenworth, a United States Army post in Kansas....
at Fort Leavenworth
Fort Leavenworth
Fort Leavenworth is a United States Army facility located in Leavenworth County, Kansas, immediately north of the city of Leavenworth in the upper northeast portion of the state. It is the oldest active United States Army post west of Washington, D.C. and has been in operation for over 180 years...
. Eugene Irwin, a highly decorated U.S. Army Lieutenant General
Lieutenant General
Lieutenant General is a military rank used in many countries. The rank traces its origins to the Middle Ages where the title of Lieutenant General was held by the second in command on the battlefield, who was normally subordinate to a Captain General....
, court martialed and sentenced for insubordination, challenges the commandant, Colonel
Colonel
Colonel , abbreviated Col or COL, is a military rank of a senior commissioned officer. It or a corresponding rank exists in most armies and in many air forces; the naval equivalent rank is generally "Captain". It is also used in some police forces and other paramilitary rank structures...
Winter, over his treatment of the prisoners. After mobilizing the inmates, Irwin leads an uprising aiming to seize control of the prison and remove Winter from command.

The film was released on October 19, 2001, in the United States, grossing about $28 million worldwide.