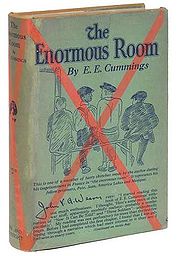 The Enormous Room is a 1922 autobiographical novel
Autobiographical novel
An autobiographical novel is a form of novel using autofiction techniques, or the merging of autobiographical and fiction elements. The literary technique is distinguished from an autobiography or memoir by the stipulation of being fiction...
by the poet and novelist E. E. Cummings
E. E. Cummings
Edward Estlin Cummings , popularly known as E. E. Cummings, with the abbreviated form of his name often written by others in lowercase letters as e.e. cummings , was an American poet, painter, essayist, author, and playwright...
about his temporary imprisonment in France
France
The French Republic , The French Republic , The French Republic , (commonly known as France , is a unitary semi-presidential republic in Western Europe with several overseas territories and islands located on other continents and in the Indian, Pacific, and Atlantic oceans. Metropolitan France...
during World War I
World War I
World War I , which was predominantly called the World War or the Great War from its occurrence until 1939, and the First World War or World War I thereafter, was a major war centred in Europe that began on 28 July 1914 and lasted until 11 November 1918...
.

Cummings served as an ambulance
Ambulance
An ambulance is a vehicle for transportation of sick or injured people to, from or between places of treatment for an illness or injury, and in some instances will also provide out of hospital medical care to the patient...
driver during the war. In late August 1917 his friend and colleague, William Slater Brown
William Slater Brown
William Slater Brown was an American novelist, biographer and translator of French literature. Most notably, he was a friend of the poet E. E...
(known in the book only as B.), was arrested by French authorities as a result of anti-war sentiments B. had expressed in some letters. When questioned, Cummings stood by his friend and was also arrested.

While Cummings was in captivity at La Ferté-Macé
La Ferté-Macé
La Ferté-Macé is a commune in the Orne department in north-western France.-History:During the First World War the village housed a military detention camp, the Dépôt de Triage. Among others, the American poet E. E...
, his father received an erroneous letter to the effect that his son had been lost at sea. The cable was later rescinded, but the subsequent lack of information on his son's whereabouts left the elder Cummings distraught.

Meanwhile, Cummings and B. had the bad luck to be transported to La Ferté only five days after the local commissioners in charge of reviewing cases for trial and pardon had left - and the commissioners were not expected back until November. When they finally did arrive, they agreed to allow Cummings, as an official "suspect", a supervised release in the remote commune of Oloron-Sainte-Marie
Oloron-Sainte-Marie
Oloron-Sainte-Marie is a commune in the Pyrénées-Atlantiques department in south-western France. The town of Oloron-Sante-Marie is positioned at the junction of two rivers and has a population of approximately 12,000. While not spectacular, it is a pleasant looking town, with an ancient quarter,...
. B. was ordered to be transferred to a prison in Précigné
Précigné
Précigné is a commune in the Sarthe département in the region of Pays-de-la-Loire in north-western France.-References:*...
. Before Cummings was to depart, he was unconditionally released from La Ferté due to U.S. diplomatic intervention. He arrived in New York City
New York City
New York is the most populous city in the United States and the center of the New York Metropolitan Area, one of the most populous metropolitan areas in the world. New York exerts a significant impact upon global commerce, finance, media, art, fashion, research, technology, education, and...
on January 1, 1918.

Cummings thus spent over four months in the prison. He met a number of interesting characters and had many picaresque adventures, which he compiled into The Enormous Room. The book is written as a mix between Cummings' well-known unconventional grammar and diction and the witty voice of a young Harvard
Harvard University
Harvard University is a private Ivy League university located in Cambridge, Massachusetts, United States, established in 1636 by the Massachusetts legislature. Harvard is the oldest institution of higher learning in the United States and the first corporation chartered in the country...
-educated intellectual in an absurd situation.

The title of the book refers to the large room where Cummings slept beside thirty or so other prisoners. However, it also serves as an allegory for Cummings' mind and his memories of the prison - such that when he describes the many residents of his shared cell, they still live in the "enormous room" of his mind.
The source of this article is wikipedia, the free encyclopedia.  The text of this article is licensed under the GFDL.