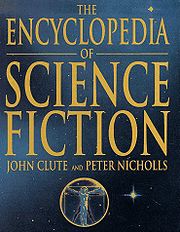 The first edition, edited by Peter Nicholls
Peter Nicholls (writer)
Peter Nicholls is an Australian literary scholar and critic. He is the creator and a co-editor of The Encyclopedia of Science Fiction ....
with John Clute
John Clute
John Frederick Clute is a Canadian born author and critic who has lived in Britain since 1969. He has been described as "an integral part of science fiction's history."...
and Brian Stableford
Brian Stableford
Brian Michael Stableford is a British science fiction writer who has published more than 70 novels. His earlier books were published as by Brian M. Stableford, but more recent ones have dropped the middle initial and appeared under the name Brian Stableford...
appeared in 1979, published by Granada. It was retitled The Science Fiction Encyclopedia in the US
United States
The United States of America is a federal constitutional republic comprising fifty states and a federal district...
when published by Doubleday. Accompanying its text were numerous black and white photographs illustrating authors, book and magazine covers, film and TV stills, and examples of artists' work.

A greatly expanded second edition, jointly edited by Nicholls and Clute, did not appear until 1993, published by Orbit
Orbit Books
Orbit Books is an international publisher that specialises in science fiction and fantasy books. It was founded in 1974 as part of the Macdonald Futura publishing company...
in the UK and St. Martin's Press
St. Martin's Press
St. Martin's Press is a book publisher headquartered in the Flatiron Building in New York City. Currently, St. Martin's Press is one of the United States' largest publishers, bringing to the public some 700 titles a year under eight imprints, which include St. Martin's Press , St...
in the US. The paperback edition included an addendum. Unlike the first edition, the print versions did not contain illustrations. The CD-ROM version, styled variously as The Multimedia Encyclopedia of Science Fiction and Grolier Science Fiction, contained text updates through 1995, hundreds of book covers and author photos, and author video clips taken from the TVOntario
TVOntario
TVOntario, often referred to only as TVO , is a publicly funded, educational English-language television station and media organization in the Canadian province of Ontario. It is operated by the Ontario Educational Communications Authority, a Crown corporation owned by the Government of Ontario...
series Prisoners of Gravity
Prisoners of Gravity
Prisoners of Gravity was a Canadian public broadcasting television news magazine program that explored speculative fiction — science fiction, fantasy, horror, comic books — and its relation to various thematic and social issues...
. This CD will not run by itself under Windows NT, Windows 2000, Windows XP or Windows Vista, but needs Windows 9x versions (Windows 95, Windows 98 or Windows ME), or an Apple computer. Contributing editor David Langford
David Langford
David Rowland Langford is a British author, editor and critic, largely active within the science fiction field. He publishes the science fiction fanzine and newsletter Ansible.-Personal background:...
built his own frontend on the data from the CD-ROM, so Linux and modern Windows users can still have access to the CD multi-media experience.

All print and CD-ROM editions are out of print. It was announced in 2005 that future editions will be available exclusively online, with publication then expected in 2007. In July 2011, Orion Publishing Group
Orion Publishing Group
Orion Publishing Group Ltd. is a UK-based book publisher. It is owned by Hachette Livre. In 1998 Orion bought Cassell.-History:Full history of the group can be found on Orion Publishing Group is owned by -Imprints:...
announced that the third edition would be released online later that year by ESF Ltd in association with Victor Gollancz
Victor Gollancz Ltd
Victor Gollancz Ltd was a major British book publishing house of the twentieth century. It was founded in 1927 by Victor Gollancz and specialised in the publication of high quality literature, nonfiction and popular fiction, including science fiction. Upon Gollancz's death in 1967, ownership...
, Orion's science fiction imprint. The "beta text" of the third edition launched on-line on 3 October 2011.

The work has different types of entries:


The first edition of the encyclopedia was awarded the 1980 Hugo Award
Hugo Award
The Hugo Awards are given annually for the best science fiction or fantasy works and achievements of the previous year. The award is named after Hugo Gernsback, the founder of the pioneering science fiction magazine Amazing Stories, and was officially named the Science Fiction Achievement Awards...
for Best Non-Fiction Book, and the second edition awarded the Hugo in 1994.