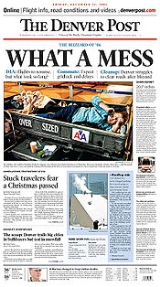 The Post is the flagship newspaper of MediaNews Group Inc.
MediaNews Group
MediaNews Group, based in Denver, Colorado, is one of the largest newspaper companies in the United States. It is privately owned and operates 56 daily newspapers in 12 states, with combined daily and Sunday circulation of approximately 2.4 million and 2.7 million, respectively...
, founded in 1983 by William Dean Singleton and Richard Scudder. MediaNews is today one of the nation's largest newspaper chains, publisher of 61 daily newspapers and more than 120 non-daily publications in 13 states. MediaNews bought The Denver Post from the Times Mirror Co. on Dec. 1, 1987. Times Mirror had bought the paper from the heirs of founder Frederick Gilmer Bonfils
Frederick Gilmer Bonfils
Frederick Gilmer Bonfils , U.S. publisher who made the Denver Post into one of the largest newspapers in the United States....
in 1980.

As the major newspaper in Denver, the Post ranks in the top 15 largest-circulation newspapers in the United States, with an average weekday circulation of 255,452.

In August 1892, The Evening Post was founded by supporters of Grover Cleveland
Grover Cleveland
Stephen Grover Cleveland was the 22nd and 24th president of the United States. Cleveland is the only president to serve two non-consecutive terms and therefore is the only individual to be counted twice in the numbering of the presidents...
with $50,000. It was a Democratic paper used to publicize political ideals and stem the number of Colorado Democrats leaving the party. Cleveland had been nominated for president because of his reputation for honest government.

However, Cleveland and eastern Democrats opposed government purchase of silver, Colorado's most important product, which made Cleveland unpopular in the state. Following the bust of silver prices in 1893, the country and Colorado went into a depression and the Evening Post suspended publication in August 1893.

Through the use of sensationalism, editorialism, and "flamboyant circus journalism," a new era began for The Post. Circulation grew and eventually passed the other three daily papers combined. On November 3, 1895 the paper's name changed to Denver Evening Post. On January 1, 1901 the word "Evening" was dropped from the name and the paper became The Denver Post.

Among well-known Post reporters were Gene Fowler
Gene Fowler
Gene Fowler was an American journalist, author and dramatist.He was born in Denver, Colorado. When his mother remarried, young Gene took his stepfather's name to become Gene Fowler. Fowler's career had a false start in taxidermy, which he later claimed permanently gave him a distaste for red meat...
and "sob sister" Polly Pry
Polly Pry
Mrs. Leonel Campbell Ross O'Bryan , under the pen name Polly Pry, was a controversial reporter for the Denver Post and later as a freelancer in the late nineteenth and early twentieth centuries...
. Damon Runyon
Damon Runyon
Alfred Damon Runyon was an American newspaperman and writer.He was best known for his short stories celebrating the world of Broadway in New York City that grew out of the Prohibition era. To New Yorkers of his generation, a "Damon Runyon character" evoked a distinctive social type from the...
worked briefly for the Post in 1905–06 before gaining fame as a writer in New York.

After the deaths of Tammen and Bonfils in 1924 and 1933, Helen and May Bonfils, Bonfils' daughters, became the principal owners of The Post. In 1946, The Post hired Palmer Hoyt away from the Portland Oregonian to become editor and publisher of the Post and to give the paper a new direction. With Hoyt in charge, news was reported fairly and accurately. He took editorial comment out of the stories and put it on an editorial page. He called the page The Open Forum and it continues today.

In 1960 there was a takeover attempt by publishing mogul Samuel I. Newhouse. Helen Bonfils brought in her friend and lawyer Donald Seawell
Donald Seawell
Donald R. Seawell was born in Jonesboro, North Carolina. His father was Aaron A. F. Seawell, a Justice of the North Carolina Supreme Court. He graduated from the University of North Carolina, and UNC Law School. In 1941 he married Broadway actress, Eugenia Rawls, who played Tallulah Bankhead's...
to save the paper. The fight led to a series of lawsuits as Post management struggled to maintain local ownership. It lasted 13 years and drained the paper financially. When Helen Bonfils died in 1972, Seawell was named president and chairman of the board. He was also head of the Denver Center for the Performing Arts
Denver Center for the Performing Arts
The Denver Center for the Performing Arts ' is an organization in Denver, Colorado which provides a showcase for live theatre, a nurturing ground for new plays, a preferred stop on the Broadway touring circuit, a graduate-level training school for actors, acting classes for the community and rental...
(DCPA). The Center was established and financed primarily by the Frederick G. and Helen G. Bonfils foundations, with aid from city funds. The majority of the assets of the foundations came from Post stock dividends.

By 1980, the paper was losing money. Critics accused Seawell of being preoccupied with building up the DCPA. Seawell sold The Post to the Times Mirror Co. of California
California
California is a state located on the West Coast of the United States. It is by far the most populous U.S. state, and the third-largest by land area...
for $95 million. Proceeds went to the Bonfils Foundation, securing the financial future of the DCPA. Times Mirror started morning publication and delivery. Circulation improved, but the paper did not perform as well as required. Times Mirror sold The Denver Post to Dean Singleton and MediaNews Group in 1987.

In January, 2001, MediaNews and E.W. Scripps, parent company of the now defunct Rocky Mountain News
Rocky Mountain News
The Rocky Mountain News was a daily newspaper published in Denver, Colorado, United States from April 23, 1859, until February 27, 2009. It was owned by the E. W. Scripps Company from 1926 until its closing. As of March 2006, the Monday-Friday circulation was 255,427...
, entered into a joint operating agreement (JOA), creating the Denver Newspaper Agency
Denver Newspaper Agency
The Denver Newspaper Agency is a publishing company in Denver, Colorado, which publishes the Denver Post, a daily newspaper owned by the MediaNews Group. From its inception in 2001 until Friday, February 27, 2009, the DNA was responsible for the non-editorial operations of both major newspapers in...
, which combined the business operations of the former rivals. Under the agreement, the newsrooms of the two newspapers agreed to publish separate morning editions Monday through Friday, with The Post retaining a broadsheet format and The News using a tabloid format.

The Post launched a staff expansion program in 2001, but declining advertising revenue led to a reduction of the newsroom staff in 2006 and 2007 through layoffs, early-retirement packages, voluntary-separation buyouts and attrition.,

Current columnists include Woody Paige
Woody Paige
Woodrow Wilson "Woody" Paige, Jr. is a sports columnist for The Denver Post, author, and a regular panelist on the ESPN sports-talk program Around the Horn. He was also a co-host of Cold Pizza and its spin-off show 1st and 10 until Nov. 4, 2006, when it was announced that Paige would return to the...
, Jim Armstrong
Jim Armstrong (sports journalist)
Jim Armstrong is a sportswriter who worked for the Denver Post. Since joining the paper in 1994, he has covered the Colorado Rockies, Denver Broncos, Denver Nuggets and was a columnist at his termination 2011-11-04 in a sports betting scandal. He also writes for America Online and has appeared on...
in Sports; Tom Noel
Thomas Noel (historian)
Thomas Jacob Noel, often introduced in media interviews as Dr. Colorado, is an American historian specializing in the history of the Rocky Mountain West, and especially of the state of Colorado...
on local history; Mike Rosen
Mike Rosen
Michael "Mike" Rosen is an American radio personality and political commentator. He is the host of The Mike Rosen Show on talk radio station 850 KOA in Denver, Colorado, as well as a weekly opinion columnist for The Denver Post and previously a weekly opinion columnist for the Rocky Mountain News...
on the commentary page. Notable former columnists include David Harsanyi
David Harsanyi
David Harsanyi is an American journalist. He is a nationally syndicated columnist. Formerly an opinion columnist at The Denver Post, his writings on politics and culture have appeared in The Wall Street Journal, Weekly Standard, Washington Post, National Review, Reason, Christian Science Monitor,...
and Al Lewis, whose work still appears in the paper as a feature from Dow Jones Newswires.

References not listed below can be found on the linked pages.