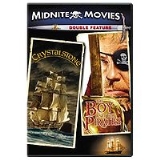 The Boy and the Pirates
Topic Home
Discussion
0

Encyclopedia
The Boy and the Pirates is a 1960 film from Bert I. Gordon
Bert I. Gordon
Bert I. Gordon is an American film director most famous for such science fiction and horror B-movies as The Amazing Colossal Man and Village of the Giants....
("Mr. B.I.G."), the master of giant monster films. It stars a very popular child star of the day in 12-year-old Charles Herbert
Charles Herbert
Charles Herbert is a former American child actor of the 1950s and 1960s. Before reaching his teens, Herbert was renowned by a generation of moviegoers for an on-screen broody, mature style and wit that enabled him to go one-on-one with some of the biggest names in the industry, and his appearances...
and Gordon's own daughter, Susan. The story line, that of a little boy and girl trapped on the pirate ship of Blackbeard
Blackbeard
Edward Teach , better known as Blackbeard, was a notorious English pirate who operated around the West Indies and the eastern coast of the American colonies....
, ranges from comical at times to downright gruesome. There is a good deal of killing during the course of the film. The cook forces Jimmy at one point to take a fish and "gut and clean it, and save his entrails". There is another moment when Morgan the pirate tries to get Jimmy to reveal his coveted information by threatening to scald his mouth with a red-hot poker.

Nonetheless, it has been described as "an engaging and innovative fantasy so perfect in its service to and embellishment of genre formula, it comes across as both completely familiar, yet breathtakingly original."

A boy, Jimmy Warren, living along the coast in Massachusetts is upset with the unfairness of "modern" life in 1960 when his father scolds him about his school grades. He plays on a wrecked ship along the shore with Kathy. He picks up an odd jar, and wishes he were back in the olden days, on a pirate ship. When Jimmy utters "Where am I?", the magic jar pops open, and a strange little man pops out. He introduces himself as Abu the Genie, and states that he has granted Jimmy his fondest wish: to be on a real pirate ship. Jimmy scoffs at the notion, but Abu insists that they are at that very moment passengers on The Queen's Revenge, the ship of the notorious Blackbeard.

"Timothy Carey on this movie, probably scared me more than The Colossus of New York!", says Charles Herbert. "But he was a nice man, and he always tried to make you feel, 'I’m not really crazy,' and you would say, 'Okay.' And then he would walk away and you’d go, 'He’s CRAZY!' He was a scary man. He’d look at me and I would run behind my mother. And I had to catch up to her, because she was tryin’ to find somebody else to hide behind!"