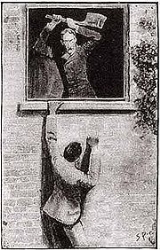 The Adventure of the Engineer's Thumb
Topic Home
Discussion
0 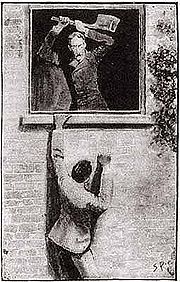 In his narration, Dr. Watson notes that this is one of only two cases which he personally brought to the attention of Sherlock Holmes
Sherlock Holmes
Sherlock Holmes is a fictional detective created by Scottish author and physician Sir Arthur Conan Doyle. The fantastic London-based "consulting detective", Holmes is famous for his astute logical reasoning, his ability to take almost any disguise, and his use of forensic science skills to solve...
.

The story, set in 1889, mainly consists of a young London
London
London is the capital city of :England and the :United Kingdom, the largest metropolitan area in the United Kingdom, and the largest urban zone in the European Union by most measures. Located on the River Thames, London has been a major settlement for two millennia, its history going back to its...
consultant hydraulic engineer, Mr. Victor Hatherley, recounting strange happenings of the night before, first to Dr. Watson who dresses the stump where Mr. Hatherley's thumb has been cut off, and then to Sherlock Holmes himself.

Hatherley had been visited in his office by a man who identified himself as Colonel Lysander Stark. He offered Hatherley a commission at a country house, to examine a hydraulic press
Hydraulic press
A hydraulic is a machine using a hydraulic cylinder to generate a compressive force. It uses the hydraulic equivalenta mechanical lever, and was also known as a Bramah press after the inventor, Joseph Bramah, of England. He invented and was issued a patent on this press in 1795...
used, as Stark explains, to compress fuller's earth
Fuller's earth
Fuller's earth is any non-plastic clay or claylike earthy material used to decolorize, filter, and purify animal, mineral, and vegetable oils and greases.-Occurrence and composition:...
into bricks. Stark warned Hatherley to keep the job confidential, offering him 50 guineas (£52 10s, an enormous sum at the time, worth over 4000 GBP today). Hatherley felt compelled to take this work, despite his misgivings, as his business was newly established and he had very little work.

Upon arriving late at night at the appointed train station, Hatherley is met by Colonel Stark, is blindfolded and driven a considerable distance in a carriage to the house where he is to examine the machine. (A minor detail is that the house was actually quite near the station, and the carriage drove around in circles to disguise the house's location from Hatherley.) Hatherley is still under the spell of the 50 guineas and does not become afraid even when a woman at the house warns him to flee. He is presently shown the press, and makes his recommendations as to needed repairs. Then, he rashly decides to inspect the press more closely, discovering that it is certainly not used for pressing fuller's earth. Hatherley narrowly escapes getting crushed to death when the machine is turned on, and is forced to jump from a window and run for his life, in the process getting his thumb
Thumb
The thumb is the first digit of the hand. When a person is standing in the medical anatomical position , the thumb is the lateral-most digit...
severed.

Holmes then makes sense of the happenings, recognising Stark and his allies as counterfeiters
Counterfeit money
Counterfeit money is currency that is produced without the legal sanction of the state or government to resemble some official form of currency closely enough that it may be confused for genuine currency. Producing or using counterfeit money is a form of fraud or forgery. Counterfeiting is probably...
, but he, Watson, and the police arrive too late: the house is on fire, and the perpetrators have fled. Ironically, the press was destroyed when Hatherley's lamp was crushed inside it, setting the machine on fire and ruining the criminals' operation.

This case is one of the few where Holmes fails to bring the villains to justice.

The story was adapted for an episode of the 1954 television series Sherlock Holmes
Sherlock Holmes (1954 TV Series)
The first and only American television series of Sherlock Holmes adventures aired in syndication in the fall of 1954. The 39 half-hour mostly original stories were produced by Sheldon Reynolds and filmed in France by Guild Films, starring Ronald Howard as Holmes and Howard Marion Crawford as Watson...
starring Ronald Howard
Ronald Howard (British actor)
Ronald Howard was an English actor and writer best known in the U.S. for starring in a weekly Sherlock Holmes television series in 1954. He was the son of actor Leslie Howard.- Life and work :...
as Holmes and Howard Marion Crawford as Watson. The episode was titled "The Case of the Shoeless Engineer" and the story was altered so that Hatherley loses a shoe rather than his thumb, and Stark and his co-conspirator are captured by Lestrade with the assistance of Holmes.