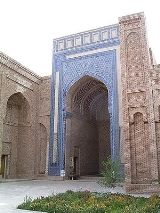 Encyclopedia
Termez is a city in southern Uzbekistan
Uzbekistan
Uzbekistan , officially the Republic of Uzbekistan is a doubly landlocked country in Central Asia and one of the six independent Turkic states. It shares borders with Kazakhstan to the west and to the north, Kyrgyzstan and Tajikistan to the east, and Afghanistan and Turkmenistan to the south....
near the border with Afghanistan
Afghanistan
Afghanistan , officially the Islamic Republic of Afghanistan, is a landlocked country located in the centre of Asia, forming South Asia, Central Asia and the Middle East. With a population of about 29 million, it has an area of , making it the 42nd most populous and 41st largest nation in the world...
.

An ancient settlement was discovered near Termez, which was populated in the times of the Greco-Bactrian rule (3rd - 2nd centuries BC).
It was the center of Buddhism
Buddhism
Buddhism is a religion and philosophy encompassing a variety of traditions, beliefs and practices, largely based on teachings attributed to Siddhartha Gautama, commonly known as the Buddha . The Buddha lived and taught in the northeastern Indian subcontinent some time between the 6th and 4th...
at the period of the Kushans (1st-2nd c. AD). With the arrival of the Arabs, in the 7th-8th century, the city became a center of Islam
Islam
Islam . The most common are and .   : Arabic pronunciation varies regionally. The first vowel ranges from ~~. The second vowel ranges from ~~~...
. Said Baraka was from old Termiz. He was a philosopher, war strategist and religious nobleman, and Amir Temur
Timur
Timur , historically known as Tamerlane in English , was a 14th-century conqueror of West, South and Central Asia, and the founder of the Timurid dynasty in Central Asia, and great-great-grandfather of Babur, the founder of the Mughal Dynasty, which survived as the Mughal Empire in India until...
’s teacher. During Amir Temur's time Termez continued to prosper, but it was destroyed at the end of the 17th century.
In 1897 the modern city emerged, with a Russian fortress and garrison. Termez was a primary transit point during the Soviet invasion (1979–89) of Afghanistan.

Termez has an arid climate with extremely hot, long summers and short, cold and bitter winters.

During the war in Afghanistan
Soviet war in Afghanistan
The Soviet war in Afghanistan was a nine-year conflict involving the Soviet Union, supporting the Marxist-Leninist government of the Democratic Republic of Afghanistan against the Afghan Mujahideen and foreign "Arab–Afghan" volunteers...
(1979–89) over 100,000 Soviet troops were based in Termez. The airbase
Airbase
An airbase is a military airfield that provides basing and support of military aircraft....
is currently the main support base for German
Bundeswehr
The Bundeswehr consists of the unified armed forces of Germany and their civil administration and procurement authorities...
and Dutch
Military of the Netherlands
The Armed forces of the Netherlands consist of the Army, Navy, and Air Force.The service branches consist of:* Koninklijke Landmacht , Royal Netherlands Army....
forces operating with the ISAF
International Security Assistance Force
The International Security Assistance Force is a NATO-led security mission in Afghanistan established by the United Nations Security Council on 20 December 2001 by Resolution 1386 as envisaged by the Bonn Agreement...
in Afghanistan.