Encyclopedia
Teradyne a US
United States
The United States of America is a federal constitutional republic comprising fifty states and a federal district...
company, is a supplier of automatic test equipment
Automatic test equipment
Automatic or Automated Test Equipment is any apparatus that performs tests on a device, known as the Device Under Test , using automation to quickly perform measurements and evaluate the test results...
(ATE). The company's divisions Semiconductor Test and Systems Test Group, are organized by the products they develop and deliver.

Teradyne was founded by Alex d’Arbeloff and Nick DeWolf
Nick DeWolf
Nicholas DeWolf was co-founder of Teradyne, a Boston, Massachusetts-based manufacturer of automatic test equipment. He founded the company in 1960 with Alex d’Arbeloff, a classmate at MIT....
, who were classmates at the Massachusetts Institute of Technology
Massachusetts Institute of Technology
The Massachusetts Institute of Technology is a private research university located in Cambridge, Massachusetts. MIT has five schools and one college, containing a total of 32 academic departments, with a strong emphasis on scientific and technological education and research.Founded in 1861 in...
(MIT) in the late 1940s. The men founded Teradyne in 1960, and set up shop in rented space above Joe and Nemo’s hotdog stand in downtown Boston. The name, Teradyne, was intended to represent a very forceful presence. 1,000,000,000,000 dyne
Dyne
In physics, the dyne is a unit of force specified in the centimetre-gram-second system of units, a predecessor of the modern SI. One dyne is equal to exactly 10 µN...
s = 10 meganewtons (2,248,089 pounds-force
Pound-force
The pound force is a unit of force in some systems of measurement including English engineering units and British gravitational units.- Definitions :...
or 1,019,716 kilograms-force
Kilogram-force
A kilogram-force , or kilopond , is a gravitational metric unit of force. It is equal to the magnitude of the force exerted by one kilogram of mass in a gravitational field...
).

In 1961, they sold their first product, a diode tester, to Raytheon
Raytheon
Raytheon Company is a major American defense contractor and industrial corporation with core manufacturing concentrations in weapons and military and commercial electronics. It was previously involved in corporate and special-mission aircraft until early 2007...
. Today, Teradyne operates major facilities in North Reading
North Reading, Massachusetts
North Reading is a town in Middlesex County, Massachusetts, United States. The population was 14,892 at the 2010 census.-History:The area was first settled in 1651 when the town of Reading received a special land grant north of the Ipswich River...
, Massachusetts; Agoura Hills
Agoura Hills, California
Agoura Hills is a city in Los Angeles County, California, and has the ZIP code 91301. The population was 20,330 at the 2010 census, down from 20,537 at the 2000 census. It is located in the eastern Conejo Valley between the Simi Hills and the Santa Monica Mountains. This city on the Ventura...
, California
California
California is a state located on the West Coast of the United States. It is by far the most populous U.S. state, and the third-largest by land area...
; Tualatin
Tualatin, Oregon
Tualatin is a city located primarily in Washington County in the U.S. state of Oregon. A small portion of the city is also located in neighboring Clackamas County. It is a southwestern suburb in the Portland Metropolitan Area that is located south of Tigard...
, Oregon
Oregon
Oregon is a state in the Pacific Northwest region of the United States. It is located on the Pacific coast, with Washington to the north, California to the south, Nevada on the southeast and Idaho to the east. The Columbia and Snake rivers delineate much of Oregon's northern and eastern...
; Fridley, Minnesota
Fridley, Minnesota
As of the census of 2000, there were 27,449 people, 11,328 households, and 7,317 families residing in the city. The population density was 2,701.3 people per square mile . There were 11,504 housing units at an average density of 1,132.1 per square mile...
, Buffalo Grove, Illinois
Buffalo Grove, Illinois
Buffalo Grove is an affluent village located in the northern suburbs of Chicago, and in Cook and Lake counties in Illinois, United States. The town was named for Buffalo Creek, which was itself named for bison bones found in the area....
, Teradyne Philippines, Teradyne Costa Rica and other locations worldwide.

Upon d'Arbeloff's retirement, George Chamillard
George Chamillard
George W. Chamillard is an American business executive who served as Chairman of the Board of Directors at Teradyne, a manufacturer of automatic test equipment for semiconductor devices, from 2000 to 2006....
assumed the post of President and CEO. He was replaced at his retirement by Mike Bradley (who had been CFO). As of 2008, Bradley remains CEO.

In 2001, in an attempt to cut costs, Teradyne conducted layoffs within its workforce. This action was a response to the late 1990s tech boom collapse.

In 2006 Teradyne sold its two Boston buildings and consolidated all of its Boston-area staff to the North Reading site. Teradyne also sold off its TCS (Teradyne Connection System)in year 2006 in order to gather cash and focus on its core business to compete with other growing competitors like Advantest, Verigy and Eagle Test Systems
Eagle Test Systems
Eagle Test Systems is a supplier of automatic test equipment and operates as a business unit within the Teradyne Semiconductor Test Division . Eagle's test equipment was designed to address volume production...
.

Teradyne's 2006 relocation to the North Reading site resulted in a new telephone number: 978-370-2700. Their old number, with a Boston area code, remains listed in many of their materials, but leads to an unaffiliated company.

In 2006, Teradyne cut costs to gather cash and buy back some of its shares. In order to cut cost, Teradyne laid off a number of employees in the US and Europe and now tries to relocate its main business unit to Asia (Singapore) and to outsource some of its business units. These steps were meant to increase profitability.

In December 2007 Teradyne announced intent to purchase Nextest Systems at a price of U.S. $20.00 per share
Share (finance)
A joint stock company divides its capital into units of equal denomination. Each unit is called a share. These units are offered for sale to raise capital. This is termed as issuing shares. A person who buys share/shares of the company is called a shareholder, and by acquiring share or shares in...
. This move was intended to allow the company to expand into the flash memory
Flash memory
Flash memory is a non-volatile computer storage chip that can be electrically erased and reprogrammed. It was developed from EEPROM and must be erased in fairly large blocks before these can be rewritten with new data...
test market.

In September 2008 Teradyne announced intent to purchase Eagle Test Systems
Eagle Test Systems
Eagle Test Systems is a supplier of automatic test equipment and operates as a business unit within the Teradyne Semiconductor Test Division . Eagle's test equipment was designed to address volume production...
. This move was intended to allow the company to expand into the Analog
Analog signal
An analog or analogue signal is any continuous signal for which the time varying feature of the signal is a representation of some other time varying quantity, i.e., analogous to another time varying signal. It differs from a digital signal in terms of small fluctuations in the signal which are...
test market.

The Semiconductor Test Division manufactures test equipments used by integrated circuit
Integrated circuit
An integrated circuit or monolithic integrated circuit is an electronic circuit manufactured by the patterned diffusion of trace elements into the surface of a thin substrate of semiconductor material...
manufacturers. As of 2006, Teradyne manufactures three principal families of testers known as the "J750", "FLEX" and "UltraFLEX". These testers are used by semiconductor
Semiconductor
A semiconductor is a material with electrical conductivity due to electron flow intermediate in magnitude between that of a conductor and an insulator. This means a conductivity roughly in the range of 103 to 10−8 siemens per centimeter...
manufacturers to test and classify the individual devices ("dies") on a completed semiconductor wafer
Wafer (electronics)
A wafer is a thin slice of semiconductor material, such as a silicon crystal, used in the fabrication of integrated circuits and other microdevices...
and then used again to retest the parts once they are enclosed in their final packaging. UltraFLEX testers are capable of testing SOC
System-on-a-chip
A system on a chip or system on chip is an integrated circuit that integrates all components of a computer or other electronic system into a single chip. It may contain digital, analog, mixed-signal, and often radio-frequency functions—all on a single chip substrate...
(Mixed-signal, System on a chip) devices with more than 4000 pins and data rates extending beyond 10 GHz. Portions of this division were acquired when Teradyne purchased Megatest.

The Assembly Test Division builds testers that test completed circuit boards (Printed circuit board
Printed circuit board
A printed circuit board, or PCB, is used to mechanically support and electrically connect electronic components using conductive pathways, tracks or signal traces etched from copper sheets laminated onto a non-conductive substrate. It is also referred to as printed wiring board or etched wiring...
s/Printed Wiring Boards) and hard drives. Portions of this division were acquired when Teradyne purchased GenRad in 2002.

Vehicle Test Solutions, previously a division of GenRad based in Manchester (UK), sells customized diagnostic equipment to automobile
Automobile
An automobile, autocar, motor car or car is a wheeled motor vehicle used for transporting passengers, which also carries its own engine or motor...
manufacturers worldwide. On 16 February 2011, Teradyne announced its intent to sell this division to SPX Corporation
SPX Corporation
SPX Corporation is a Fortune 500 multi-industry manufacturing firm. SPX's business segments serve developing and emerging end markets, such as global infrastructure, process equipment, and diagnostic tool industries. With corporate headquarters in Charlotte, North Carolina, they have operations in...
.

Teradyne Connection Systems, based in Nashua
Nashua, New Hampshire
-Climate:-Demographics:As of the census of 2010, there were 86,494 people, 35,044 households, and 21,876 families residing in the city. The population density was 2,719.9 people per square mile . There were 37,168 housing units at an average density of 1,202.8 per square mile...
, New Hampshire
New Hampshire
New Hampshire is a state in the New England region of the northeastern United States of America. The state was named after the southern English county of Hampshire. It is bordered by Massachusetts to the south, Vermont to the west, Maine and the Atlantic Ocean to the east, and the Canadian...
manufactures high-density electronic connector
Electrical connector
An electrical connector is an electro-mechanical device for joining electrical circuits as an interface using a mechanical assembly. The connection may be temporary, as for portable equipment, require a tool for assembly and removal, or serve as a permanent electrical joint between two wires or...
s, complete backplane
Backplane
A backplane is a group of connectors connected in parallel with each other, so that each pin of each connector is linked to the same relative pin of all the other connectors forming a computer bus. It is used as a backbone to connect several printed circuit boards together to make up a complete...
s, and systems packaging. On 10 October 2005, Teradyne announced that this division was being sold to Amphenol
Amphenol
Amphenol Corporation is a major producer of electronic and fiber optic connectors, cable and interconnect systems such as Coaxial cables. Amphenol is a portmanteau from the corporation's original name, American Phenolic Corp....
for about US$ 390 million in cash. 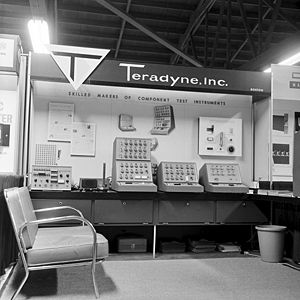