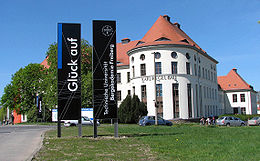 The Technische Universität Bergakademie Freiberg (usually translated from German
German language
German is a West Germanic language, related to and classified alongside English and Dutch. With an estimated 90 – 98 million native speakers, German is one of the world's major languages and is the most widely-spoken first language in the European Union....
as Freiberg University of Mining and Technology or Freiberg Mining Academy, University of Technology and abbreviated TUBAF) is a small German
Germany
Germany , officially the Federal Republic of Germany , is a federal parliamentary republic in Europe. The country consists of 16 states while the capital and largest city is Berlin. Germany covers an area of 357,021 km2 and has a largely temperate seasonal climate...
University of Technology with about 5000 students in the city of Freiberg
Freiberg, Saxony
Freiberg is a city in the Free State of Saxony, Germany, administrative center of the Mittelsachsen district.-History:The city was founded in 1186, and has been a center of the mining industry in the Ore Mountains for centuries...
, Saxony
Saxony
The Free State of Saxony is a landlocked state of Germany, contingent with Brandenburg, Saxony Anhalt, Thuringia, Bavaria, the Czech Republic and Poland. It is the tenth-largest German state in area, with of Germany's sixteen states....
. It was established in 1765, by Prince Franz Xaver, regent of Saxony, based on plans by Friedrich Wilhelm von Oppel and Friedrich Anton von Heynitz, and is the oldest university of mining and metallurgy in the world. The chemical elements Indium
Indium
Indium is a chemical element with the symbol In and atomic number 49. This rare, very soft, malleable and easily fusible post-transition metal is chemically similar to gallium and thallium, and shows the intermediate properties between these two...
(1863) and Germanium
Germanium
Germanium is a chemical element with the symbol Ge and atomic number 32. It is a lustrous, hard, grayish-white metalloid in the carbon group, chemically similar to its group neighbors tin and silicon. The isolated element is a semiconductor, with an appearance most similar to elemental silicon....
(1886) were discovered by scientists of Freiberg University. The polymath
Polymath
A polymath is a person whose expertise spans a significant number of different subject areas. In less formal terms, a polymath may simply be someone who is very knowledgeable...
Alexander von Humboldt
Alexander von Humboldt
Friedrich Wilhelm Heinrich Alexander Freiherr von Humboldt was a German naturalist and explorer, and the younger brother of the Prussian minister, philosopher and linguist Wilhelm von Humboldt...
studied mining at the Bergakademie Freiberg in 1791/1792.

Virtuhcon is a research centre at Technische Universität Bergakademie Freiberg. The centre was founded within the framework of the Entrepreunerial Regions Initiative "Centres of Innovation Competence: Create Excellence - Foster Talents" from the BMBF (Federal Ministry of Education and Research) and will start working in 2009. Virtuhcon is the acronym for Virtual High Temperature Conversion Processes.