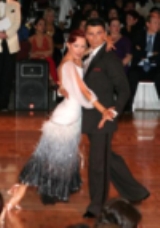 Encyclopedia
Ballroom Tango is a ballroom dance
Ballroom dance
Ballroom dance refers to a set of partner dances, which are enjoyed both socially and competitively around the world. Because of its performance and entertainment aspects, ballroom dance is also widely enjoyed on stage, film, and television....
that branched away from its original Argentine roots by allowing European, American, Hollywood, and competitive (a.k.a dancesport
DanceSport
Dancesport denotes competitive ballroom dancing, as contrasted to social or exhibition dancing. It is wheelchair dancesport where at least one of the dancers is in a wheelchair....
) influences into the style and execution of the dance.

The present day ballroom tango is divided into two disciplines: American Style and International Style. Both styles are enjoyed as social and competitive dances, but the International version is more globally accepted as a competitive style. Both styles share a closed dance position, but the American style allows its practitioners to separate from closed position to execute open moves, like underarm turns, alternate hand holds, dancing apart, and side-by-side choreography.

Following the English standardization of their version of Tango, Arthur Murray
Arthur Murray
Arthur Murray was a dance instructor and businessman, whose name is most often associated with the dance studio chain that bears his name....
, a ballroom dance instructor in the U.S., tried his own hand at standardizing the ballroom dances for instruction in his chain of social dance schools. Consequently, his tango syllabus incorporated steps with Argentine, Hollywood and socially popular influences and techniques . This looser social style was referred to as American style by the English.

In 1912 tango was introduced to British audiences, showcased in the successful musical comedy The Sunshine Girl
The Sunshine Girl
The Sunshine Girl is an Edwardian musical comedy in two acts with a book by Paul A. Rubens and Cecil Raleigh, lyrics and music by Rubens and additional lyrics by Arthur Wimperis. The story involves a working girl who falls in love with the heir to the factor...
. Concurrently, the dance became popular elsewhere in Europe, particularly in Paris. As the European dancers enjoyed the music and passion of the dance , they began to inject their own culture, style and technique into the dance.

In an effort to teach a standardized version of the tango, the English eventually codified their own version of tango for instruction in dance schools and for performance in competitions in 1922. The resulting style was referred to as English style, but eventually took on the name International style, as this became the competitive ballroom version practiced around the world.

Eventually, championships in the international style tango were organized all over Europe with numerous participating countries. Adjudicators were able to judge against a standardized syllabus and book of techniques, thereby creating a more objective means of picking the champions, even though artistic interpretation remains an important element of competition.

Initially, the English dominated the International style tango, but eventually, technicians from other backgrounds, most notably the Italians, have chipped away at the English standard and created a dynamic style that continues to raise the competitive bar.
The source of this article is wikipedia, the free encyclopedia.  The text of this article is licensed under the GFDL.