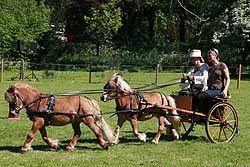 Tandem is an arrangement where a team of machines, animals or people are lined up one behind another, all facing in the same direction.

Tandem harness (the original use of the term in English
English language
English is a West Germanic language that arose in the Anglo-Saxon kingdoms of England and spread into what was to become south-east Scotland under the influence of the Anglian medieval kingdom of Northumbria...
) is used for two or more draft horse
Draft horse
A draft horse , draught horse or dray horse , less often called a work horse or heavy horse, is a large horse bred for hard, heavy tasks such as ploughing and farm labour...
s (or other draft animal
Working animal
A working animal is an animal, usually domesticated, that is kept by humans and trained to perform tasks. They may be close members of the family, such as guide or service dogs, or they may be animals trained strictly to perform a job, such as logging elephants. They may also be used for milk, a...
s) harnessed in a single line one behind another, as opposed to a pair, harnessed side-by-side, or a team of several pairs. Tandem harness allows additional animals to provide pulling power for a vehicle designed for a single animal.

Tandem seating may be used in two-seat aircraft, or on a tandem bicycle
Tandem bicycle
The tandem bicycle or twin is a form of bicycle designed to be ridden by more than one person. The term tandem refers to the seating arrangement , not the number of riders. A bike with two riders side-by-side is called a sociable.-History:Patents related to tandem bicycles date from the late 19th...
where it is alternative to sociable
Sociable
The Sociable or Buddy Bike or Side By Side Bicycle is a bicycle that supports two riders who sit side by side.This type of bicycle should not be referred to as a tandem bicycle as "tandem" is defined as: "a group of two or more arranged one behind the other ..."-History:The Sociable is said by some...
seating.

The English word "tandem" derives from the Latin adverb
Adverb
An adverb is a part of speech that modifies verbs or any part of speech other than a noun . Adverbs can modify verbs, adjectives , clauses, sentences, and other adverbs....
meaning "at length" or "finally".

The term "tandem" can also be used more generally to refer to any group of persons or objects working together, not necessarily in line. A tandem arrangement may also be used for cars parked in a garage
Garage (house)
A residential garage is part of a home, or an associated building, designed or used for storing a vehicle or vehicles. In some places the term is used synonymously with "carport", though that term normally describes a structure that is not completely enclosed.- British residential garages:Those...
.

The two seating configurations for trainer aircraft are pilot and instructor side by side or in tandem, usually with the pilot in front and the instructor behind. A cockpit can be lengthened to create a trainer with tandem seating from a single seater aircraft.

An alternative configuration is side-by-side seating which is common in large aircraft but less so in high performance jets. The Grumman A-6 Intruder, General Dynamics F-111
General Dynamics F-111
The General Dynamics F-111 "Aardvark" was a medium-range interdictor and tactical strike aircraft that also filled the roles of strategic bomber, reconnaissance, and electronic warfare in its various versions. Developed in the 1960s by General Dynamics, it first entered service in 1967 with the...
or the Sukhoi Su-24
Sukhoi Su-24
The Sukhoi Su-24 is a supersonic, all-weather attack aircraft developed in the Soviet Union. This variable-sweep wing, twin-engined two-seater carried the USSR's first integrated digital navigation/attack system...
are examples of combat aircraft which use this configuration. For training aircraft, it has the advantage that pilot and instructor can see each others' actions, allowing the pilot to learn from the instructor and the instructor to correct the student pilot. The tandem configuration has the advantage of being closer to the normal working environment that a fast jet pilot is likely to encounter.

In some cases such as the EA-6B Prowler, a two-place aircraft can be modified to be made longer into a four-place aircraft. Also a single seat cockpit can be redesigned into a side-by-side arrangement in the case of the A-1 Skyraider
A-1 Skyraider
The Douglas A-1 Skyraider was an American single-seat attack aircraft that saw service between the late 1940s and early 1980s. It became a piston-powered, propeller-driven anachronism in the jet age, and was nicknamed "Spad", after a French World War I fighter...
, TF-102 trainer or the Hawker Hunter
Hawker Hunter
The Hawker Hunter is a subsonic British jet aircraft developed in the 1950s. The single-seat Hunter entered service as a manoeuvrable fighter aircraft, and later operated in fighter-bomber and reconnaissance roles in numerous conflicts. Two-seat variants remained in use for training and secondary...
training versions.