Encyclopedia
Talin is a high-molecular-weight cytoskeletal protein concentrated at regions of cell–substratum contact and, in lymphocytes, at cell–cell contacts. Discovered in 1983 by Keith Burridge
Keith Burridge
Keith Burridge is a British-born researcher and Kenan distinguished Professor at the University of North Carolina at Chapel Hill. His research on focal adhesions includes the discovery of many adhesion proteins including vinculin, talin and paxillin, and ranks him in top 1% of the most cited...
and colleagues, talin is a ubiquitous cytosolic protein that is found in high concentrations in focal adhesions. It is capable of linking integrins to the actin
Actin
Actin is a globular, roughly 42-kDa moonlighting protein found in all eukaryotic cells where it may be present at concentrations of over 100 μM. It is also one of the most highly-conserved proteins, differing by no more than 20% in species as diverse as algae and humans...
cytoskeleton either directly or indirectly by interacting with vinculin
Vinculin
In mammalian cells, vinculin is a membrane-cytoskeletal protein in focal adhesion plaques that is involved in linkage of integrin adhesion molecules to the actin cytoskeleton...
and alpha-actinin.

Integrin receptors are involved in the attachment of adherent cells to the extracellular matrix
Extracellular matrix
In biology, the extracellular matrix is the extracellular part of animal tissue that usually provides structural support to the animal cells in addition to performing various other important functions. The extracellular matrix is the defining feature of connective tissue in animals.Extracellular...
and of lymphocytes to other cells. In these situations, talin codistributes with concentrations of integrins in the plasma membrane. Furthermore, in vitro
In vitro
In vitro refers to studies in experimental biology that are conducted using components of an organism that have been isolated from their usual biological context in order to permit a more detailed or more convenient analysis than can be done with whole organisms. Colloquially, these experiments...
binding studies suggest that integrins bind to talin, although with low affinity. Talin also binds with high affinity to vinculin, another cytoskeletal protein concentrated at points of cell adhesion
Cell adhesion
Cellular adhesion is the binding of a cell to a surface, extracellular matrix or another cell using cell adhesion molecules such as selectins, integrins, and cadherins. Correct cellular adhesion is essential in maintaining multicellular structure...
. Finally, talin is a substrate for the calcium-ion activated protease
Protease
A protease is any enzyme that conducts proteolysis, that is, begins protein catabolism by hydrolysis of the peptide bonds that link amino acids together in the polypeptide chain forming the protein....
, calpain
Calpain
A calpain is a protein belonging to the family of calcium-dependent, non-lysosomal cysteine proteases expressed ubiquitously in mammals and many other organisms. Calpains constitute the C2 family of protease clan CA in the MEROPS database...
II, which is also concentrated at points of cell–substratum contact.

Talin consists of a large C-terminal rod domain that contains bundles of alpha helices and an N-terminal FERM
FERM domain
In molecular biology, the FERM domain is a widespread protein module involved in localising proteins to the plasma membrane. FERM domains are found in a number of cytoskeletal-associated proteins that associate with various proteins at the interface between the plasma membrane and the cytoskeleton...
(band 4.1, ezrin, radixin, and moesin) domain with three subdomains: F1, F2, and F3. The F3 subdomain of the FERM domain contains the highest affinity integrin-binding site for integrin
Integrin
Integrins are receptors that mediate attachment between a cell and the tissues surrounding it, which may be other cells or the ECM. They also play a role in cell signaling and thereby regulate cellular shape, motility, and the cell cycle....
β tails and is sufficient to activate integrins. 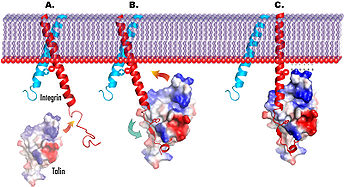 A structure–function analysis reported recently provides a cogent structural model (see top right) to explain talin-dependent integrin
Integrin
Integrins are receptors that mediate attachment between a cell and the tissues surrounding it, which may be other cells or the ECM. They also play a role in cell signaling and thereby regulate cellular shape, motility, and the cell cycle....
activation in three steps: