Encyclopedia
Talbiya or Talbiyeh officially Komemiyut, is an upscale neighborhood in Jerusalem, Israel
Israel
The State of Israel is a parliamentary republic located in the Middle East, along the eastern shore of the Mediterranean Sea...
, located between Rehavia
Rehavia
Rehavia is an upscale Jerusalem neighborhood located between the city center and Talbiya.-History:Rehavia was established on a large plot of land purchased in 1921 from the Greek Orthodox Church by the Palestine Land Development Company . The area was known at the time as Ginzaria, a native...
and Katamon. It was built in the 1920s and 1930s on land purchased from the Greek Patriarchate. Most of the early residents were affluent Christian Arabs who built elegant homes with Renaissance, Moorish and Arab architectural motifs, surrounded by trees and flowering gardens. 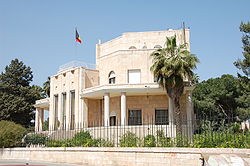 After World War I, Constantine Salameh, a native of Beirut, bought land in Talbiya from the Greek Orthodox Patriarchate with the idea of building a prestigious neighborhood for Christian Arabs. In addition to a villa for himself, Salameh built two apartment houses on the square that was named for him. After Israel's War of Independence, some Arab residents of Talbiya lost the right to their properties due to Israel's Absentee Property Law
Custodian of Enemy Property
The Custodian of Enemy Property is an institution that handles property claims created by war. In wartime,civilian property may be left behind or taken by the occupying state. In ancient times, such property was considered war loot, and the legal right of the winner...
. Salameh, however, proved that he had not fled his home but left the country on business, and was thus paid compensation by the Israeli government. Talbiya's Gan Hashoshanim (Rose Garden) dates back to the 1930s. After the establishment of the State of Israel, official Independence Day events were held at this park.

Before the Six-Day War, many of the villas in Talbiya housed foreign consulates. The home of Constantine Salameh, which he leased to the Belgian consulate, faces a flowering square, originally Salameh Square, later renamed Wingate Square to commemorate Orde Wingate, a British officer who trained members of the Haganah
Haganah
Haganah was a Jewish paramilitary organization in what was then the British Mandate of Palestine from 1920 to 1948, which later became the core of the Israel Defense Forces.- Origins :...
in the 1930s. Marcus Street is named for Colonel David (Mickey) Marcus, an officer in the U.S. army who volunteered to be a military advisor in Israel’s War of Independence.

The neighborhood's Hebrew name Komemiyut, (קוממיות) introduced after the establishment of the state, never caught on, and it is still known as Talbiya. Many of Jerusalem's important cultural institutions are located in Talbiya, among them the Jerusalem Theater
Jerusalem Theater
The Jerusalem Theater is a center for the performing arts in Jerusalem, Israel. The theater opened in 1971. The complex consists of the Sherover Theatre, which seats 950, the Henry Crown Symphony Hall with 750 seats, the Rebecca Crown Auditorium, with 450 seats, and the Little Theater with 110...
, the Van Leer Institute
Van Leer Jerusalem Institute
The Van Leer Jerusalem Institute is an academic institute in Jerusalem established in 1959 by the Van Leer family of the Netherlands.The Van Leer Institute is a center for the interdisciplinary study and discussion of issues related to philosophy, society, culture and education...
and Beit HaNassi
Beit HaNassi
Beit HaNassi , also known as Mishkan HaNassi "Presidential Residence" is the official residence of the President of Israel. It is located in the Talbiya neighborhood of Jerusalem, Israel.-History:...
, the official residence of the President of Israel
President of Israel
The President of the State of Israel is the head of state of Israel. The position is largely an apolitical ceremonial figurehead role, with the real executive power lying in the hands of the Prime Minister. The current president is Shimon Peres who took office on 15 July 2007...
.