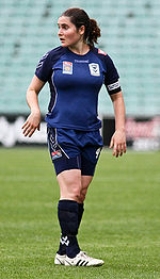 Encyclopedia
Tal Karp is a female Australia
Australia
Australia , officially the Commonwealth of Australia, is a country in the Southern Hemisphere comprising the mainland of the Australian continent, the island of Tasmania, and numerous smaller islands in the Indian and Pacific Oceans. It is the world's sixth-largest country by total area...
n football (soccer)
Football (soccer)
Association football, more commonly known as football or soccer, is a sport played between two teams of eleven players with a spherical ball...
player who currently plays for Melbourne Victory in the Australian W-League
W-League (Australia)
The W-League is the preeminent women's semi-professional football league in Australia. Established in 2008, it is composed of eight teams - seven of them are affiliated with seven of the Australian clubs currently in the A-League, with the eighth team based in Canberra...
.

In 2007 Karp joined the Ashburton Women's Soccer Team in the Victorian Women's Premier League. In 2008 she moved to rivals Box Hill Inter
Box Hill Inter
Box Hill United Football Club is an Australian association football club based in the Melbourne suburb of Box Hill.- History :Box Hill entered the Victorian Division 4 in 1925. In their first season they lost one game and drew once to became champion and win promotion to division 3 for the 1926...
and helped them to win the Grand Final. Karp was Runner-Up Best and Fairest player for Box Hill in 2008.

In October 2008, Karp was signed by the newly formed Melbourne Victory as captain.