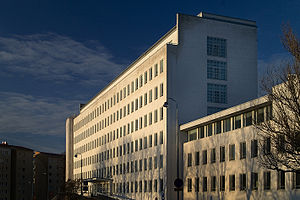 Turku University Hospital is a hospital
Hospital
A hospital is a health care institution providing patient treatment by specialized staff and equipment. Hospitals often, but not always, provide for inpatient care or longer-term patient stays....
in Turku
Turku
Turku is a city situated on the southwest coast of Finland at the mouth of the Aura River. It is located in the region of Finland Proper. It is believed that Turku came into existence during the end of the 13th century which makes it the oldest city in Finland...
, Finland
Finland
Finland , officially the Republic of Finland, is a Nordic country situated in the Fennoscandian region of Northern Europe. It is bordered by Sweden in the west, Norway in the north and Russia in the east, while Estonia lies to its south across the Gulf of Finland.Around 5.4 million people reside...
.

The hospital is owned and operated by the Hospital District of Southwest Finland which is a joint municipal authority responsible for production of specialized medical services
Health care
Health care is the diagnosis, treatment, and prevention of disease, illness, injury, and other physical and mental impairments in humans. Health care is delivered by practitioners in medicine, chiropractic, dentistry, nursing, pharmacy, allied health, and other care providers...
in the region.

The hospital has been affiliated with the University of Turku
University of Turku
The University of Turku , located in Turku in southwestern Finland, is the second largest university in the country as measured by student enrollment, after University of Helsinki. It was established in 1920 and also has faculties at Rauma, Pori and Salo...
since 1958 and it is used as a teaching hospital by the Faculty of Medicine. Approximately 1,500 students in medicine and nursery practice there every year.

Having been founded in 1756, it is the second oldest hospital in the Nordic countries
Nordic countries
The Nordic countries make up a region in Northern Europe and the North Atlantic which consists of Denmark, Finland, Iceland, Norway and Sweden and their associated territories, the Faroe Islands, Greenland and Åland...
, after Rigshospitalet
Rigshospitalet
Rigshospitalet - Copenhagen University Hospital, or simply Riget, is the national hospital of Denmark, located in the capital city of Copenhagen, between the streets of Blegdamsvej, Tagensvej and Nørre Allé...
in Copenhagen
Copenhagen
Copenhagen is the capital and largest city of Denmark, with an urban population of 1,199,224 and a metropolitan population of 1,930,260 . With the completion of the transnational Øresund Bridge in 2000, Copenhagen has become the centre of the increasingly integrating Øresund Region...
.

T-hospital is new part of TYKS and its construction was started 2007 and it is still under construction. In 2009 the construction of first part ( part-D ) was finished and it's now operational. Whole complex is planned to be finished in 2012. When finished T-hospital will consist of 160.000 m² of floor space and a helipad
Helipad
Helipad is a common abbreviation for helicopter landing pad, a landing area for helicopters. While helicopters are able to operate on a variety of relatively flat surfaces, a fabricated helipad provides a clearly marked hard surface away from obstacles where a helicopter can safely...
.

The hospital has 900 beds and its operating volumes were in 2009 as follows:

The yearly operating costs for the hospital are 369,2 million euro
Euro
The euro is the official currency of the eurozone: 17 of the 27 member states of the European Union. It is also the currency used by the Institutions of the European Union. The eurozone consists of Austria, Belgium, Cyprus, Estonia, Finland, France, Germany, Greece, Ireland, Italy, Luxembourg,...
s according to the budget for the fiscal year of 2009.