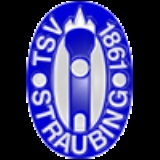 Encyclopedia
The TSV Straubing is a German association football club
Football in Germany
Association football is the most popular sport in Germany. The German Football Association is the sport's national governing body, with 6.6 million members organized in over 26,000 football clubs. There is a league system, with the 1. and 2. Bundesliga on top, and the winner of the first...
from the city of Straubing
Straubing
Straubing is an independent city in Lower Bavaria, southern Germany. It is seat of the district of Straubing-Bogen. Annually in August the Gäubodenvolksfest, the second largest fair in Bavaria, is held....
, Bavaria. The club achieved notability by playing in the second division
2nd Oberliga Süd
The 2nd Oberliga Süd was the second-highest level of the German football league system in the south of Germany from 1950 until the formation of the Bundesliga in 1963. It covered the three states of Bavaria, Baden-Württemberg and Hessen.-Overview:...
from 1950 to 1961.

TSV Straubing was also the parent club of what is now the Straubing Tigers
Straubing Tigers
The Straubing Tigers are a professional men's ice hockey team in the German Ice Hockey League . They play out of Straubing, Germany, and they play their home games at Eisstadion am Pulverturm, which can hold 5,800 spectators....
in the Deutsche Eishockey Liga, which split from the TSV in 1981.

The club was formed as a gymnastics club in 1861, under the name of TV Jahn Straubing. Football in Straubing was first represented at top-level in the 1931–32 season, when the FC Straubing, formed in 1921, spent a year in the Bezirksliga Bayern
Bezirksliga Bayern
The Bezirksliga Bayern was the highest association football league in the German state of Bavaria from 1923 to 1933. The league was disbanded with the rise of the Nazis to power in 1933.-Overview:...
. Another attempt was made by the military team of Luftwaffen SV Straubing, which played in the Gauliga Südbayern from 1942 to 1944.

The current club, TSV Straubing, formed in 1945 out of a merger of TV Jahn and FC, first appeared in the upper reaches of Bavarian football in 1946, when a regional Niederbayern title earned it promotion to the Landesliga Bayern
Landesliga Bayern
In the Bavarian football league system, the Landesliga Bayern is the second hightest level, below the Fußball-Bayernliga and organised in three regional divisions. The current Landesligas were formed in 1963, when the Fußball-Bundesliga was established...
(II). TSV became part of the southern division of this league, where it played for two seasons as a mid-table side. In 1948, when the league was again reduced to one single division, Straubing missed out on direct qualification, coming seventh when a sixth place was needed. The club was however offered a second chance, having to play the seventh placed team from the north and beating TSV 04 Schwabach 1–0 and thereby securing a spot for the next Landesliga season after all.

TSV earned another seventh place in 1948–49 but improved the season after, coming third. This proved enough to qualify for the 2nd Oberliga Süd
2nd Oberliga Süd
The 2nd Oberliga Süd was the second-highest level of the German football league system in the south of Germany from 1950 until the formation of the Bundesliga in 1963. It covered the three states of Bavaria, Baden-Württemberg and Hessen.-Overview:...
, the new second division for Southern Germany, and, alongside 1. FC Bamberg
1. FC Bamberg
The 1. FC Bamberg was a German association football club from the town of Bamberg, Bavaria.In 2006, the club merged with TSV Eintracht Bamberg to form 1. FC Eintracht Bamberg. 1. FC Eintracht went bankrupt in 2010 and a new club was formed, FC Eintracht Bamberg 2010.1...
, FC Bayern Hof, FC Wacker München and ASV Cham
ASV Cham
The ASV Cham is a German association football club from the city of Cham, Bavaria. The club's most notable achievement was playing in the second division from 1950 to 1962.-History:...
, the club left the Bavarian football leagues for the first time in its history.

Straubing scored another seventh place in 1950–51, its first season in the 2nd Oberliga and performed one spot better in the following year. In 1952–53, it came closer to relegation trouble, finishing eleventh; the next year a 13th place and a gap of only four points saw the club's worst season in the league yet. In 1955, the team finished sixth, after that, until 1957, it became a secure mid-table side. The 1957–58 season saw TSV came within two points of relegation, despite finishing twelfth out of eighteen teams. After this, two got seasons followed with mid-table results again.

The 1960–61 season was to be Straubings last as a second division side, it came last in the league and was narrowly relegated, one point shy of a non-relegation spot.

Back in the third division, which was now the Amateurliga Südbayern, TSV finished fourth in 1962 and took out the league title the season after. The club was unfortunate in that the introduction of the Fußball-Bundesliga
Fußball-Bundesliga
The Fußball-Bundesliga is a professional association football league in Germany. At the top of Germany's football league system, it is the country's primary football competition. It is contested by 18 teams and operates on a system of promotion and relegation with the 2. Bundesliga...
and the disbanding of the Oberliga and 2nd Oberliga meant, no promotion was available that season. TSV, having won all 16 home games this season, also took out the Bavarian championship with a 5–1 win in the third game against 1. FC Bamberg from the northern division.

Straubing came second in the Landesliga in 1970–71 but only the champions were promoted in this era and the clubs fortunes in the league became a mixed bag after this, a good season followed by an average one. In 1976–77, another second place, two points behind champions FC Herzogenaurach
FC Herzogenaurach
The 1. FC Herzogenaurach is a German association football club from the city of Herzogenaurach, Bavaria.The history of the club is strongly interwined with the Sports equipment manufacturer Puma, then just a local company and sponsor of the FC and its rivalry to ASV Herzogenaurach, which was...
, proved again not enough and in 1979 the club suffered relegation to the Bezirksliga instead. Straubing immediately recovered, earned promotion back to the Landesliga and finished second once more in the league in 1981 and unsuccessfully took part in the Promotion to the Oberliga Bayern
Promotion to the Oberliga Bayern
The Fußball-Bayernliga, the fifth tier of the German football league system and highest football league in the state of Bavaria, has four teams annually promoted to the league, the champions of the three Landesligas, and a fourth club, determined by an annual promotion round...
. That season, the clubs ice hockey department left to form the EHC Straubing. The club finally returned to what was now the Amateur Oberliga Bayern in 1982, taking out the league title in the Landesliga. TSV finished seventh in this league in 1982–83, on equal points with newly relegated TSV 1860 Munich, but could only finish 18th the year after and was relegated back to the Landesliga.

In 1996, the club took out the Bezirksoberliga Niederbayern (VI) title and returned to the Landesliga for five seasons. Initially, starting with a fifth place, the club performed well but then declined season by season and was once again relegated in 2001, after an 18th place finish.

In the 2010–11 season, the club played in the Kreisliga-2-Straubing, the ninth tier of the league system, suffering another relegation, now to the Kreisklasse.