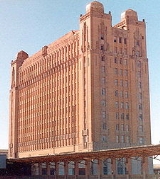 The current Texas & Pacific Station building was built by the Texas and Pacific Railway
Texas and Pacific Railway
The Texas and Pacific Railway Company was created by federal charter in 1871 with the purpose of building a southern transcontinental railroad between Marshall, Texas, and San Diego, California....
opened on October 25, 1931. It was designed in the Zigzag Moderne Art Deco
Art Deco
Art deco , or deco, is an eclectic artistic and design style that began in Paris in the 1920s and flourished internationally throughout the 1930s, into the World War II era. The style influenced all areas of design, including architecture and interior design, industrial design, fashion and...
style popular at the time. The opulent lobby features marble floors, metal-inlaid panel ceilings, and nickel and brass fixtures, incorporating the zigzags and chevrons distinctive of the style. The terminal facilities also included the larger Texas & Pacific Warehouse one block to the west, built in the same style as the station.

The passenger area of the station, which had not been occupied by HUD and was virtually untouched since 1967, was restored to its former beauty in 1999 at a cost of $1.4 million. Passenger service resumed at Texas & Pacific station on December 3, 2001 with the TRE's extension into Fort Worth.

The destruction of the elevated highway
Interstate 30
Interstate 30 is an Interstate Highway in the southern United States. I-30 runs from Interstate 20 west of Fort Worth, Texas, northeast via Dallas, Texas, and Texarkana, Texas, to Interstate 40 in North Little Rock, Arkansas. The route parallels U.S. Route 67 except for the portion west of...
in 2002 opened the Lancaster Avenue area for redevelopment. The upper floors of the T&P station have been renovated and are available for purchase as condominiums. The building's facade also underwent renovation and a new parking facility was built on the south side of the building. The historic diner on the ground floor was renovated and converted into a bar called the T&P Tavern. The T&P Warehouse building has not yet been renovated and is currently vacant; in July 2007, after nearly four years of negotiations, the city of Fort Worth contracted with Dallas developer Cleopatra Investments to begin residential development, slated for completion in 2012. However, economic conditions and construction-related issues have delayed the project.