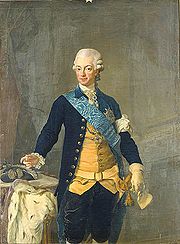 Sweden's Constitution of 1772 took effect through a bloodless coup d'état
Coup d'état
A coup d'état state, literally: strike/blow of state)—also known as a coup, putsch, and overthrow—is the sudden, extrajudicial deposition of a government, usually by a small group of the existing state establishment—typically the military—to replace the deposed government with another body; either...
carried out by King Gustav III, who had become king in 1771, establishing a brief absolute monarchy in Sweden. This was a response to perceived harm wrought upon Sweden by a half-century of parliamentarism during the country's "Age of Liberty". The 1772 Constitution was criticised as authoritarian and in 1789 was amended in a still more autocratic direction by the Union and Security Act.

Formally, the 1772 Constitution was adopted by the Parliament
Riksdag of the Estates
The Riksdag of the Estates , was the name used for the Estates of the Swedish realm when they were assembled. Until its dissolution in 1866, the institution was the highest authority in Sweden next to the King...
(Riksdag) on 21 August 1772, but this took place after members of the Privy Council
Privy Council of Sweden
The High Council of Sweden or Council of the Realm consisted originally of those men of noble, common and clergical background, that the king saw fit for advisory service...
and the leading members of the Parliament had been arrested by the royal garrison on order by Gustav III.

The 1772 Constitution replaced the Swedish Constitution of 1720 (which was fundamentally similar to the 1719 Constitution) and was in turn replaced by the 1809 Instrument of Government following the defeat in the Finnish War
Finnish War
The Finnish War was fought between Sweden and the Russian Empire from February 1808 to September 1809. As a result of the war, the eastern third of Sweden was established as the autonomous Grand Duchy of Finland within the Russian Empire...
and the removal of king Gustav IV Adolf
Gustav IV Adolf of Sweden
Gustav IV Adolf of Sweden also Gustav Adolph was King of Sweden from 1792 until his abdication in 1809. He was the son of Gustav III of Sweden and his queen consort Sophia Magdalena, eldest daughter of Frederick V of Denmark and his first wife Louise of Great Britain. He was the last Swedish...
from the throne.

In the Grand Duchy of Finland
Grand Duchy of Finland
The Grand Duchy of Finland was the predecessor state of modern Finland. It existed 1809–1917 as part of the Russian Empire and was ruled by the Russian czar as Grand Prince.- History :...
, created in 1809 from the eastern third of Sweden as part of the Russian Empire, the amended 1772 Constitution was in force until 17 July 1919. In Sweden, the loss of Finland resulted in both a new royal dynasty (Jean-Baptiste Bernadotte
Charles XIV John of Sweden
Charles XIV & III John, also Carl John, Swedish and Norwegian: Karl Johan was King of Sweden and King of Norway from 1818 until his death...
being appointed successor to the throne) and a rewriting of the constitution, resulting in the new Instrument of Government, with more limited powers of the king.