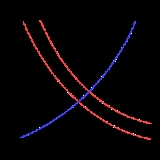 Overview
Supply and demand is an economic model of price determination in a market
Market
A market is one of many varieties of systems, institutions, procedures, social relations and infrastructures whereby parties engage in exchange. While parties may exchange goods and services by barter, most markets rely on sellers offering their goods or services in exchange for money from buyers...
. It concludes that in a competitive market
Perfect competition
In economic theory, perfect competition describes markets such that no participants are large enough to have the market power to set the price of a homogeneous product. Because the conditions for perfect competition are strict, there are few if any perfectly competitive markets...
, the unit price
Unit price
Average prices represent, quite simply, total sales revenue divided by total units sold. Many products, however, are sold in multiple variants, such as bottle sizes. In these cases, managers face a challenge: they must determine “comparable” units. Average prices can be calculated by weighting...
for a particular good will vary until it settles at a point where the quantity demanded by consumers (at current price) will equal the quantity supplied by producers (at current price), resulting in an economic equilibrium
Economic equilibrium
In economics, economic equilibrium is a state of the world where economic forces are balanced and in the absence of external influences the values of economic variables will not change. It is the point at which quantity demanded and quantity supplied are equal...
of price and quantity.

The four basic laws of supply and demand are:

Although it is normal to regard the quantity demanded and the quantity supplied as functions
Function (mathematics)
In mathematics, a function associates one quantity, the argument of the function, also known as the input, with another quantity, the value of the function, also known as the output. A function assigns exactly one output to each input. The argument and the value may be real numbers, but they can...
of the price of the good, the standard graphical representation, usually attributed to Alfred Marshall
Alfred Marshall
Alfred Marshall was an Englishman and one of the most influential economists of his time. His book, Principles of Economics , was the dominant economic textbook in England for many years...
, has price on the vertical axis and quantity on the horizontal axis, the opposite of the standard convention for the representation of a mathematical function.

Using the demand and supply analysis try to describe the recent increase in wheat prices worldwide..

Explain the relationship and influence price per quantity demanded has on the product (coffee) market equlibrium. I need some help with this and I ...

Using the demand and supply analysis try to describe the recent increase in wheat prices worldwide..

If supply shifts to the right, and demand remains constant what will happen to the prices.

What are the factors which determines demand?
More

How is the concept of elasticity useful to theories of supply and demand?

What causes changes in supply and demand

A) “Market demand for wheat is relatively stable over time but market supply of wheat is very much influenced by the weather. For example, a natural d...