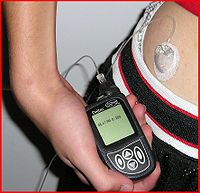 A subcutaneous injection (abbreviated as SC, SQ, sub-cu, sub-Q or subcut with SQ being the preferred abbreviation, since it is the only abbreviation listed under the entry for "subcutaneous" in Dorland's 28th edition) is administered as a bolus
Bolus (medicine)
In medicine, a bolus is the administration of a medication, drug or other compound that is given to raise its concentration in blood to an effective level...
into the subcutis, the layer of skin directly below the dermis
Dermis
The dermis is a layer of skin between the epidermis and subcutaneous tissues, and is composed of two layers, the papillary and reticular dermis...
and epidermis, collectively referred to as the cutis
Cutis
Cutis may refer to several unrelated biological structures:* Cutis , the outermost layers of skin* Cutis , a type of pileipellis with a repent arrangement of hyphaeand to:* Cutiş, a village in Almaşu Commune, Sălaj County, Romania...
. Subcutaneous injections are highly effective in administering vaccines and medications such as insulin
Insulin
Insulin is a hormone central to regulating carbohydrate and fat metabolism in the body. Insulin causes cells in the liver, muscle, and fat tissue to take up glucose from the blood, storing it as glycogen in the liver and muscle....
, morphine
Morphine
Morphine is a potent opiate analgesic medication and is considered to be the prototypical opioid. It was first isolated in 1804 by Friedrich Sertürner, first distributed by same in 1817, and first commercially sold by Merck in 1827, which at the time was a single small chemists' shop. It was more...
, diacetylmorphine and goserelin
Goserelin
Goserelin acetate is an injectable gonadotropin releasing hormone superagonist , also known as a luteinizing hormone releasing hormone agonist. Structurally, it is a decapeptide...
.

These areas can vary with the size of the person. Changing the injection site keeps lumps or small dents called lipodystrophies
Lipodystrophy
Lipodystrophy is a medical condition characterized by abnormal or degenerative conditions of the body's adipose tissue. A more specific term, lipoatrophy is used when describing the loss of fat from one area...
from forming in the skin. However, people should try to use the same body area for injections that are given at the same time each day-for example, always using the abdomen
Abdomen
In vertebrates such as mammals the abdomen constitutes the part of the body between the thorax and pelvis. The region enclosed by the abdomen is termed the abdominal cavity...
for the morning injection or an arm for the evening injection. Using the same body area for these routine injections lessens the possibility of changes in the timing and action of insulin.