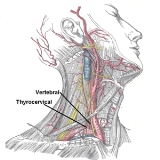 Encyclopedia
In human anatomy
Human anatomy
Human anatomy is primarily the scientific study of the morphology of the human body. Anatomy is subdivided into gross anatomy and microscopic anatomy. Gross anatomy is the study of anatomical structures that can be seen by the naked eye...
, the subclavian arteries are two major arteries of the upper thorax
Thorax
The thorax is a division of an animal's body that lies between the head and the abdomen.-In tetrapods:...
(chest), below the clavicle (collar bone). They receive blood from the top (arch) of the aorta
Aorta
The aorta is the largest artery in the body, originating from the left ventricle of the heart and extending down to the abdomen, where it branches off into two smaller arteries...
. The left subclavian artery supplies blood to the left arm and the right subclavian artery supplies blood to the right arm, with some branches supplying the head and thorax.


The usual branches of the subclavian on both sides of the body are the vertebral artery
Vertebral artery
The vertebral arteries are major arteries of the neck. They branch from the subclavian arteries and merge to form the single midline basilar artery in a complex called the vertebrobasilar system, which supplies blood to the posterior part of the circle of Willis and thus significant portions of the...
, the internal thoracic artery
Internal thoracic artery
In human anatomy, the internal thoracic artery , previously known as the internal mammary artery , is an artery that supplies the anterior chest wall and the breasts...
, the thyrocervical trunk
Thyrocervical trunk
The thyrocervical trunk is a branch of the subclavian artery arising from the first portion of this vessel, i.e. between the origin of the subclavian artery and the inner border of the scalenus anterior muscle...
, the costocervical trunk
Costocervical trunk
The costocervical trunk arises from the upper and back part of the subclavian artery, behind the scalenus anterior on the right side, and medial to that muscle on the left side....
and the dorsal scapular artery
Dorsal scapular artery
The dorsal scapular artery is a blood vessel which supplies thelevator scapulae, rhomboids, and trapezius.-Origin:...
. The subclavian becomes the axillary artery
Axillary artery
In human anatomy, the axillary artery is a large blood vessel that conveys oxygenated blood to the lateral aspect of the thorax, the axilla and the upper limb...
at the lateral border of the first rib
Rib
In vertebrate anatomy, ribs are the long curved bones which form the rib cage. In most vertebrates, ribs surround the chest, enabling the lungs to expand and thus facilitate breathing by expanding the chest cavity. They serve to protect the lungs, heart, and other internal organs of the thorax...
. 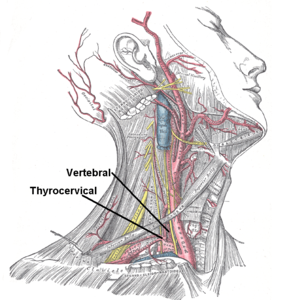 Embryologically
Embryology
Embryology is a science which is about the development of an embryo from the fertilization of the ovum to the fetus stage...
, the left subclavian simply arises from the left 7th intersegmental artery, while the right subclavian arises, proximal to distal:

On the right side the subclavian artery arises from the brachiocephalic (innominate) artery behind the right sternoclavicular articulation; on the left side it springs from the arch of the aorta. The two vessels, therefore, in the first part of their course, differ in length, direction, and relation with neighboring structures.

In order to facilitate the description, each subclavian artery is divided into three parts:

The first portions of the two vessels require separate descriptions; the second and third parts of the two arteries are practically alike.

The first part of the right subclavian artery arises from the innominate artery, behind the upper part of the right sternoclavicular articulation, and passes upward and lateralward to the medial margin of the Scalenus anterior. It ascends a little above the clavicle, the extent to which it does so varying in different cases.

It is covered, in front, by the integument, superficial fascia, Platysma, deep fascia, the clavicular origin of the Sternocleidomastoideus, the Sternohyoideus, and Sternothyreoideus, and another layer of the deep fascia. It is crossed by the internal jugular and vertebral veins, by the vagus nerve and the cardiac branches of the vagus and sympathetic, and by the subclavian loop of the sympathetic trunk which forms a ring around the vessel. The anterior jugular vein is directed lateralward in front of the artery, but is separated from it by the Sternohyoideus and Sternothyreoideus. Below and behind the artery is the pleura, which separates it from the apex of the lung; behind is the sympathetic trunk, the Longus collie and the first thoracic vertebra. The right recurrent nerve winds around the lower and back part of the vessel.

The first part of the left subclavian artery arises from the arch of the aorta, behind the left common carotid, and at the level of the fourth thoracic vertebra; it ascends in the superior mediastinal cavity to the root of the neck and then arches lateralward to the medial border of the Scalenus anterior.

It is in relation, in front, with the vagus, cardiac, and phrenic nerves, which lie parallel with it, the left common carotid artery, left internal jugular and vertebral veins, and the commencement of the left innominate vein, and is covered by the Sternothyreoideus, Sternohyoideus, and Sternocleidomastoideus; behind, it is in relation with the esophagus, thoracic duct, left recurrent nerve, inferior cervical ganglion of the sympathetic trunk, and Longus colli; higher up, however, the esophagus and thoracic duct lie to its right side; the latter ultimately arching over the vessel to join the angle of union between the subclavian and internal jugular veins. Medial to it are the esophagus, trachea, thoracic duct, and left recurrent nerve; lateral to it, the left pleura and lung.


Second Part of the Subclavian Artery

The second portion of the subclavian artery lies behind the Scalenus anterior; it is very short, and forms the highest part of the arch described by the vessel.


Third Part of the Subclavian Artery

The third portion of the subclavian artery runs downward and lateralward from the lateral margin of the Scalenus anterior to the outer border of the first rib, where it becomes the axillary artery. This is the most superficial portion of the vessel, and is contained in the subclavian triangle.

It is covered, in front, by the skin, the superficial fascia, the Platysma, the supraclavicular nerves, and the deep cervical fascia. The external jugular vein crosses its medial part and receives the transverse scapular, transverse cervical, and anterior jugular veins, which frequently form a plexus in front of the artery. Behind the veins, the nerve to the Subclavius descends in front of the artery. The terminal part of the artery lies behind the clavicle and the Subclavius and is crossed by the transverse scapular vessels. The subclavian vein is in front of and at a slightly lower level than the artery. Behind, it lies on the lowest trunk of the brachial plexus, which intervenes between it and the Scalenus medius. Above and to its lateral side are the upper trunks of the brachial plexus and the Omohyoideus. Below, it rests on the upper surface of the first rib.

The subclavian arteries vary in their origin, their course, and the height to which they rise in the neck.

The origin of the right subclavian from the innominate takes place, in some cases, above the sternoclavicular articulation, and occasionally, but less frequently, below that joint. The artery may arise as a separate trunk from the arch of the aorta, and in such cases it may be either the first, second, third, or even the last branch derived from that vessel; in the majority, however, it is the first or last, rarely the second or third. When it is the first branch, it occupies the ordinary position of the innominate artery; when the second or third, it gains its usual position by passing behind the right carotid; and when the last branch, it arises from the left extremity of the arch, and passes obliquely toward the right side, usually behind the trachea, esophagus, and right carotid, sometimes between the esophagus and trachea, to the upper border of the first rib, whence it follows its ordinary course. In very rare instances, this vessel arises from the thoracic aorta, as low down as the fourth thoracic vertebra. Occasionally, it perforates the Scalenus anterior; more rarely it passes in front of that muscle. Sometimes the subclavian vein passes with the artery behind the Scalenus anterior. The artery may ascend as high as 4 cm. above the clavicle, or any intermediate point between this and the upper border of the bone, the right subclavian usually ascending higher than the left.

The left subclavian is occasionally joined at its origin with the left carotid.