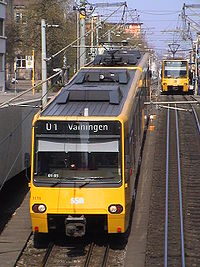 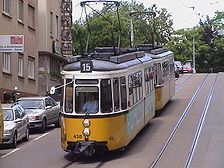 Stuttgarter Straßenbahnen AG (SSB) is the principal public transport operating company in the German
Germany
Germany , officially the Federal Republic of Germany , is a federal parliamentary republic in Europe. The country consists of 16 states while the capital and largest city is Berlin. Germany covers an area of 357,021 km2 and has a largely temperate seasonal climate...
city of Stuttgart
Stuttgart
Stuttgart is the capital of the state of Baden-Württemberg in southern Germany. The sixth-largest city in Germany, Stuttgart has a population of 600,038 while the metropolitan area has a population of 5.3 million ....
. The SSB operates light rail lines
Light rail
Light rail or light rail transit is a form of urban rail public transportation that generally has a lower capacity and lower speed than heavy rail and metro systems, but higher capacity and higher speed than traditional street-running tram systems...
, bus lines
Bus
A bus is a road vehicle designed to carry passengers. Buses can have a capacity as high as 300 passengers. The most common type of bus is the single-decker bus, with larger loads carried by double-decker buses and articulated buses, and smaller loads carried by midibuses and minibuses; coaches are...
, a rack railway
Rack railway
A rack-and-pinion railway is a railway with a toothed rack rail, usually between the running rails. The trains are fitted with one or more cog wheels or pinions that mesh with this rack rail...
, and a funicular railway
Funicular
A funicular, also known as an inclined plane or cliff railway, is a cable railway in which a cable attached to a pair of tram-like vehicles on rails moves them up and down a steep slope; the ascending and descending vehicles counterbalance each other.-Operation:The basic principle of funicular...
.

Since the coat of arms of Stuttgart shows a black, rampant horse on a yellow or golden field, the Stuttgart Stadtbahn as well as all the buses come in yellow with black window frames.

The Stadtbahn or (light rail system) covers 17 lines. The system is operated with 164 cars, operates on standard gauge
Standard gauge
The standard gauge is a widely-used track gauge . Approximately 60% of the world's existing railway lines are built to this gauge...
track, and is electrified at 750 volt
Volt
The volt is the SI derived unit for electric potential, electric potential difference, and electromotive force. The volt is named in honor of the Italian physicist Alessandro Volta , who invented the voltaic pile, possibly the first chemical battery.- Definition :A single volt is defined as the...
s DC
Direct current
Direct current is the unidirectional flow of electric charge. Direct current is produced by such sources as batteries, thermocouples, solar cells, and commutator-type electric machines of the dynamo type. Direct current may flow in a conductor such as a wire, but can also flow through...
.

The last remaining tram line (15) ceased to operate on December, 8th, 2007 and was replaced by the Stadtbahn line U15 on the same day. The old tram system was operated by 38 cars of type GT4
GT4 (tram)
The GT4 is a tramway vehicle built by Maschinenfabrik Esslingen.-History:...
. Unlike the city's light rail system, the tram system operated on metre gauge
Metre gauge
Metre gauge refers to narrow gauge railways and tramways with a track gauge of . In some African, American and Asian countries it is the main gauge. In Europe it has been used for local railways in France, Germany, and Belgium, most of which were closed down in mid 20th century. Only in Switzerland...
track. The conversion of tram lines to light rail lines was thus a complex procedure, and necessitates mixed gauge track where both systems operated over the same track.

The bus network of the SSB covers Stuttgart and many neighbouring cities, with 54 different routes. Bus routes are operated by both SSB itself, and by other operators under contract to SSB.

SSB's own bus fleet consists of approximately 250 vehicles, of which about 160 are articulated bus
Articulated bus
An articulated bus is an articulated vehicle used in public transportation. It is usually a single-deck design, and comprises two rigid sections linked by a pivoting joint...
es. The buses are predominantly of Mercedes Benz manufacture, although there are 36 made by MAN in the years 2001 and 2002. The bus fleet is operated from depots and yards at Gaisburg, Möhringen, Sielmingen
Sielmingen
Sielmingen is a former municipality in the Esslingen district, in Baden-Württemberg, Germany.It was first recorded in year 1275 as Sygehelmingen....
, and Zuffenhausen
Zuffenhausen
Zuffenhausen is an urban district in the northern suburbs of Stuttgart, the capital of the German state of Baden-Württemberg. It consists mainly of the formerly independent city of Zuffenhausen. The Zuffenhausen district has an area of 1,200 hectares and 35,568 inhabitants .The oldest surviving...
.

The SSB is part of the regional transport cooperative, the Verkehrs- und Tarifverbund Stuttgart
Verkehrs- und Tarifverbund Stuttgart
The Verkehrs- und Tarifverbund Stuttgart is a regional transport cooperative that coordinates tickets and fares among all transport operators in the metropolitan area of Stuttgart in Germany...
(VVS), which coordinates tickets and fares among all transport operators in the metropolitan area. Besides the SSB's Stadtbahn, tram and bus networks, this coordination includes the Stuttgart S-Bahn
Stuttgart S-Bahn
The Stuttgart S-Bahn is a suburban railway system serving the Stuttgart Region, an agglomeration of around 2.6 million people, consisting of the city of Stuttgart and the adjacent districts of Esslingen, Böblingen, Ludwigsburg and Rems-Murr. It consists of seven lines numbered S1 through S6 and...
, operated by a subsidiary of Deutsche Bahn AG
Deutsche Bahn
Deutsche Bahn AG is the German national railway company, a private joint stock company . Headquartered in Berlin, it came into existence in 1994 as the successor to the former state railways of Germany, the Deutsche Bundesbahn of West Germany and the Deutsche Reichsbahn of East Germany...
(DBAG), and DBAG's RegionalBahn
RegionalBahn
The Regionalbahn is a type of local passenger train in Germany.-Service:Regionalbahn trains usually call at all stations on a given line, with the exception of RB trains within S-Bahn networks, these may only call at selected stations...
regional train services within the VVS area.