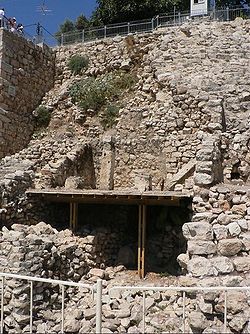 The Stepped Stone Structure is the name given to the remains at a particular archaeological site (sometimes termed Area G) on the eastern side of the City of David, the oldest part of Jerusalem. The curved, 60ft high, narrow stone structure is built over a series of terraces (hence the name). A casemate
Casemate
A casemate, sometimes rendered casement, is a fortified gun emplacement or armored structure from which guns are fired. originally a vaulted chamber in a fortress.-Origin of the term:...
wall adjoins the structure from a northerly direction at the upper levels, and may have been the original city wall.

It was uncovered during a series of excavations by R.A.S. Macalister in the 1920s, Kathleen Kenyon
Kathleen Kenyon
Dame Kathleen Mary Kenyon , was a leading archaeologist of Neolithic culture in the Fertile Crescent. She is best known for her excavations in Jericho in 1952-1958.-Early life:...
in the 1960s, and Yigal Shiloh in the 1970s-80s. Kathleen Kenyon dated the structure to the start of Iron Age
Iron Age
The Iron Age is the archaeological period generally occurring after the Bronze Age, marked by the prevalent use of iron. The early period of the age is characterized by the widespread use of iron or steel. The adoption of such material coincided with other changes in society, including differing...
II (1000-900 BC); Macalister believed it to be Jebusite
Jebusite
According to the Hebrew Bible, the Jebusites were a Canaanite tribe who inhabited and built Jerusalem prior to its conquest by King David; the Books of Kings state that Jerusalem was known as Jebus prior to this event...
. Macalister, the first to excavate the structure, called the remains he had found a ramp; other scholars, after the more recent discoveries by Kenyon and Shiloh, have suggested that it might be a retaining wall, or a fortress. Israel Finkelstein
Israel Finkelstein
Israel Finkelstein is an Israeli archaeologist and academic. He is currently the Jacob M. Alkow Professor of the Archaeology of Israel in the Bronze Age and Iron Ages at Tel Aviv University and is also the co-director of excavations at Megiddo in northern Israel...
et al. suggest that the upper part of the structure was substantially rebuilt in the Hasmonean
Hasmonean
The Hasmonean dynasty , was the ruling dynasty of Judea and surrounding regions during classical antiquity. Between c. 140 and c. 116 BCE, the dynasty ruled semi-autonomously from the Seleucids in the region of Judea...
period.

It is hypothesized that the structure may be the Biblical Millo
Millo
The Millo was a structure in Jerusalem mentioned by the Books of Kings, and corresponding passages in the Books of Chronicles. The texts simply describe the Millo as having been built by Solomon and repaired by Hezekiah,, without giving an explanation of what exactly the Millo was...
. A recent excavation by Eilat Mazar
Eilat Mazar
Eilat Mazar is a third-generation Israeli archaeologist, specializing in Jerusalem and Phoenician archeology. A senior fellow at the Shalem Center, she has worked on the Temple Mount excavations, as well as excavations at Achzib. In addition to heading the Shalem Center's Institute of Archeology,...
directly above the Stepped Stone Structure shows that the structure connects with and supports the Large Stone Structure
Large Stone Structure
The Large Stone Structure is the name given to the remains of a large public building in the City of David neighborhood of central Jerusalem, south of the Old City, tentatively dated to 10th to 9th century BCE. The name was given to the structure, as a result of its proximity with another site...
. Mazar presents evidence that the Large Stone Structure was an Israelite royal palace in continuous use from the tenth century until 586 BCE. Her conclusion that the stepped stone structure and the large stone structure are parts of a single, massive royal palace makes sense of the biblical reference to the millo as the House of Millo in II Kings 12:21 and II Chronicles 24:25 as the place where King Joash was assassinated in 799 BCE while he slept in his bed. Millo is derived from "fill", (Hebrew milui). The stepped stone support structure is built of fills.
The source of this article is wikipedia, the free encyclopedia.  The text of this article is licensed under the GFDL.