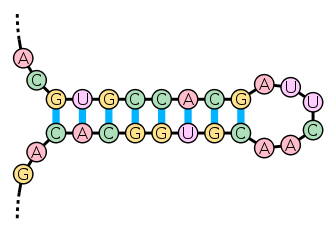 Stem-loop intramolecular base pair
Base pair
In molecular biology and genetics, the linking between two nitrogenous bases on opposite complementary DNA or certain types of RNA strands that are connected via hydrogen bonds is called a base pair...
ing is a pattern that can occur in single-stranded DNA
DNA
Deoxyribonucleic acid is a nucleic acid that contains the genetic instructions used in the development and functioning of all known living organisms . The DNA segments that carry this genetic information are called genes, but other DNA sequences have structural purposes, or are involved in...
or, more commonly, in RNA
RNA
Ribonucleic acid , or RNA, is one of the three major macromolecules that are essential for all known forms of life....
. The structure is also known as a hairpin or hairpin loop. It occurs when two regions of the same strand, usually complementary in nucleotide
Nucleotide
Nucleotides are molecules that, when joined together, make up the structural units of RNA and DNA. In addition, nucleotides participate in cellular signaling , and are incorporated into important cofactors of enzymatic reactions...
sequence when read in opposite directions, base-pair to form a double helix that ends in an unpaired loop. The resulting structure is a key building block of many RNA secondary structures.

The formation of a stem-loop structure is dependent on the stability of the resulting helix and loop regions. The first prerequisite is the presence of a sequence that can fold back on itself to form a paired double helix. The stability of this helix is determined by its length, the number of mismatches or bulges it contains (a small number are tolerable, especially in a long helix) and the base composition of the paired region. Pairings between guanine
Guanine
Guanine is one of the four main nucleobases found in the nucleic acids DNA and RNA, the others being adenine, cytosine, and thymine . In DNA, guanine is paired with cytosine. With the formula C5H5N5O, guanine is a derivative of purine, consisting of a fused pyrimidine-imidazole ring system with...
and cytosine
Cytosine
Cytosine is one of the four main bases found in DNA and RNA, along with adenine, guanine, and thymine . It is a pyrimidine derivative, with a heterocyclic aromatic ring and two substituents attached . The nucleoside of cytosine is cytidine...
have three hydrogen bond
Hydrogen bond
A hydrogen bond is the attractive interaction of a hydrogen atom with an electronegative atom, such as nitrogen, oxygen or fluorine, that comes from another molecule or chemical group. The hydrogen must be covalently bonded to another electronegative atom to create the bond...
s and are more stable compared to adenine
Adenine
Adenine is a nucleobase with a variety of roles in biochemistry including cellular respiration, in the form of both the energy-rich adenosine triphosphate and the cofactors nicotinamide adenine dinucleotide and flavin adenine dinucleotide , and protein synthesis, as a chemical component of DNA...
-uracil
Uracil
Uracil is one of the four nucleobases in the nucleic acid of RNA that are represented by the letters A, G, C and U. The others are adenine, cytosine, and guanine. In RNA, uracil binds to adenine via two hydrogen bonds. In DNA, the uracil nucleobase is replaced by thymine.Uracil is a common and...
pairings, which have only two. In RNA, guanine-uracil pairings featuring two hydrogen bonds are as well common and favorable. Base stacking interactions, which align the pi orbitals
Pi bond
In chemistry, pi bonds are covalent chemical bonds where two lobes of one involved atomic orbital overlap two lobes of the other involved atomic orbital...
of the bases' aromatic rings in a favorable orientation, also promote helix formation.

The stability of the loop also influences the formation of the stem-loop structure. "Loops" that are less than three bases long are sterically
Steric effects
Steric effects arise from the fact that each atom within a molecule occupies a certain amount of space. If atoms are brought too close together, there is an associated cost in energy due to overlapping electron clouds , and this may affect the molecule's preferred shape and reactivity.-Steric...
impossible and do not form. Large loops with no secondary structure of their own (such as pseudoknot
Pseudoknot
A pseudoknot is a nucleic acid secondary structure containing at least two stem-loop structures in which half of one stem is intercalated between the two halves of another stem. The pseudoknot was first recognized in the turnip yellow mosaic virus in 1982...
pairing) are also unstable. Optimal loop length tends to be about 4-8 bases long. One common loop with the sequence UUCG is known as the "tetraloop
Tetraloop
Tetraloops are a type of four-base hairpin loop motifs in RNA secondary structure that cap many double helices. Three types of tetraloops are common in ribosomal RNA: GNRA, UNCG and CUUG. The GNRA tetraloop has a guanine-adenine base-pair where the guanine is 5' to the helix and the adenine is 3'...
" and is particularly stable due to the base-stacking interactions of its component nucleotides.

Stem-loops occur in pre-microRNA structures and most famously in transfer RNA
Transfer RNA
Transfer RNA is an adaptor molecule composed of RNA, typically 73 to 93 nucleotides in length, that is used in biology to bridge the three-letter genetic code in messenger RNA with the twenty-letter code of amino acids in proteins. The role of tRNA as an adaptor is best understood by...
, which contain three true stem-loops and one stem that meet in a cloverleaf pattern. The anticodon that recognizes a codon during the translation
Translation (genetics)
In molecular biology and genetics, translation is the third stage of protein biosynthesis . In translation, messenger RNA produced by transcription is decoded by the ribosome to produce a specific amino acid chain, or polypeptide, that will later fold into an active protein...
process is located on one of the unpaired loops in the tRNA. Two nested stem-loop structures occur in RNA pseudoknot
Pseudoknot
A pseudoknot is a nucleic acid secondary structure containing at least two stem-loop structures in which half of one stem is intercalated between the two halves of another stem. The pseudoknot was first recognized in the turnip yellow mosaic virus in 1982...
s, where the loop of one structure forms part of the second stem.

The mRNA stem-loop structure forming at the ribosome binding site may control an initiation
Initiation
Initiation is a rite of passage ceremony marking entrance or acceptance into a group or society. It could also be a formal admission to adulthood in a community or one of its formal components...
of translation
Translation
Translation is the communication of the meaning of a source-language text by means of an equivalent target-language text. Whereas interpreting undoubtedly antedates writing, translation began only after the appearance of written literature; there exist partial translations of the Sumerian Epic of...
.

Stem-loop structures are also important in prokaryotic
Prokaryote
The prokaryotes are a group of organisms that lack a cell nucleus , or any other membrane-bound organelles. The organisms that have a cell nucleus are called eukaryotes. Most prokaryotes are unicellular, but a few such as myxobacteria have multicellular stages in their life cycles...
rho-independent transcription termination. The hairpin loop forms in an mRNA strand during transcription and causes the RNA polymerase
RNA polymerase
RNA polymerase is an enzyme that produces RNA. In cells, RNAP is needed for constructing RNA chains from DNA genes as templates, a process called transcription. RNA polymerase enzymes are essential to life and are found in all organisms and many viruses...
to become dissociated from the DNA template strand. This process is known as rho-independent or intrinsic termination, and the sequences involved are called terminator sequences.

can form the following hairpin structure

A longer example of a 5' → 3' sequence of RNA which would lead to a hairpin loop structure is: