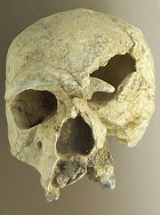 Encyclopedia
The Steinheim skull is a fossil
Fossil
Fossils are the preserved remains or traces of animals , plants, and other organisms from the remote past...
ized skull
Human skull
The human skull is a bony structure, skeleton, that is in the human head and which supports the structures of the face and forms a cavity for the brain.In humans, the adult skull is normally made up of 22 bones...
of an archaic Homo sapiens
Archaic Homo sapiens
Archaic Homo sapiens is a loosely defined term used to describe a number of varieties of Homo, as opposed to anatomically modern humans , in the period beginning 500,000 years ago....
or Homo heidelbergensis
Homo heidelbergensis
Homo heidelbergensis is an extinct species of the genus Homo which may be the direct ancestor of both Homo neanderthalensis in Europe and Homo sapiens. The best evidence found for these hominins date between 600,000 and 400,000 years ago. H...
found in 1933 near Steinheim an der Murr
Steinheim an der Murr
Steinheim an der Murr is a town in the district of Ludwigsburg, Baden-Württemberg, Germany. It is situated on the river Murr, 9 km northeast of Ludwigsburg. The Steinheim Skull was found near Steinheim an der Murr....
(20 km north of Stuttgart
Stuttgart
Stuttgart is the capital of the state of Baden-Württemberg in southern Germany. The sixth-largest city in Germany, Stuttgart has a population of 600,038 while the metropolitan area has a population of 5.3 million ....
, Germany
Germany
Germany , officially the Federal Republic of Germany , is a federal parliamentary republic in Europe. The country consists of 16 states while the capital and largest city is Berlin. Germany covers an area of 357,021 km2 and has a largely temperate seasonal climate...
). 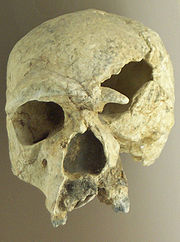