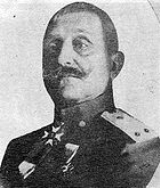 Encyclopedia
Stefan Toshev (18 December 1859 – 27 November 1924) was a Bulgarian General
General
A general officer is an officer of high military rank, usually in the army, and in some nations, the air force. The term is widely used by many nations of the world, and when a country uses a different term, there is an equivalent title given....
, from World War I
World War I
World War I , which was predominantly called the World War or the Great War from its occurrence until 1939, and the First World War or World War I thereafter, was a major war centred in Europe that began on 28 July 1914 and lasted until 11 November 1918...
. His mother was a teacher from the period of the National Revival. He volunteered in the Bulgarian Opalchentsi Corps
Opalchentsi
Opalchentsi were Bulgarian voluntary army units, who took part in the Serbo-Turkish War of 1876 and the Russo-Turkish War of 1877–1878. The people in these units were called opalchenets-pobornik meaning "volunteer combatant"....
during the Russo-Turkish War (1877–1878) and later served as a translator. On 10 May 1879 he graduated the Military School in Sofia
Sofia
Sofia is the capital and largest city of Bulgaria and the 12th largest city in the European Union with a population of 1.27 million people. It is located in western Bulgaria, at the foot of Mount Vitosha and approximately at the centre of the Balkan Peninsula.Prehistoric settlements were excavated...
in its first year. Then he served in the Police force of Eastern Rumelia
Eastern Rumelia
Eastern Rumelia or Eastern Roumelia was an administratively autonomous province in the Ottoman Empire and Principality of Bulgaria from 1878 to 1908. It was under full Bulgarian control from 1885 on, when it willingly united with the tributary Principality of Bulgaria after a bloodless revolution...
.

During the Serbo-Bulgarian War
Serbo-Bulgarian War
The Serbo-Bulgarian War was a war between Serbia and Bulgaria that erupted on 14 November 1885 and lasted until 28 November the same year. Final peace was signed on 19 February 1886 in Bucharest...
in 1885 Stefan Toshev was a commander of 2nd company of the 3rd Vidin Regiment, and was in charge of the Tran
Tran, Bulgaria
Tran |thorn]]") is a small town in Pernik Province, western Bulgaria. It is 27 kilometres away from the town of Breznik and 15 km from the border with Serbia....
position. He took part in the battle of Slivnitsa
Battle of Slivnitsa
Called by historians the "Battle of the captains vs the generals," referring to the young Bulgarian army, whose highest rank went up to a captain, the Battle of Slivnitsa was a decisive factor in the victory of the Bulgarian army over the Serbians on November 17–19, 1885 in the...
, the fight at Tran (3 November), the repulse of the Serbian Morava Division. He fought bravely in the battle of Tri Ushi and the attack of Meka tsrav (7 November). He was awarded with Order For Bravery 4th Class.

During the First Balkan War
First Balkan War
The First Balkan War, which lasted from October 1912 to May 1913, pitted the Balkan League against the Ottoman Empire. The combined armies of the Balkan states overcame the numerically inferior and strategically disadvantaged Ottoman armies and achieved rapid success...
(1912–1913) Stefan Toshev and his division took part in the offensive of the Bulgarian Army in the Thracian theatre of operation. He participated in the fights of Gechkenli and Seliolu during the battle of Kirk Kilisse
Battle of Kirk Kilisse
The Battle of Kirk Kilisse or Battle of Kirkkilise or Battle of Lozengrad was part of the First Balkan War between the armies of Bulgaria and the Ottoman Empire. It took place on 24 October 1912, when the Bulgarian army defeated an Ottoman army in Eastern Thrace.The initial clashes were around...
and the attack at Chataldzha. On 5 August 1913 he was promoted Lieutenant General
Lieutenant General
Lieutenant General is a military rank used in many countries. The rank traces its origins to the Middle Ages where the title of Lieutenant General was held by the second in command on the battlefield, who was normally subordinate to a Captain General....
.

During the Second Balkan War
Second Balkan War
The Second Balkan War was a conflict which broke out when Bulgaria, dissatisfied with its share of the spoils of the First Balkan War, attacked its former allies, Serbia and Greece, on 29 June 1913. Bulgaria had a prewar agreement about the division of region of Macedonia...
he was in command of the 5th Army which successfully fought against the Serbs.

During the Bulgarian participation in World War I
World War I
World War I , which was predominantly called the World War or the Great War from its occurrence until 1939, and the First World War or World War I thereafter, was a major war centred in Europe that began on 28 July 1914 and lasted until 11 November 1918...
(1915–1918) General Toshev was in charge of the 3rd Army which routed the Russian-Romanian Army in the Dobrudzhan campaign defeating it in the battles at Dobrich
Battle of Dobrich
The battle of Dobrich, also known as the battle of Bazargic or the Dobrich epopee , took place between 5 and 7 September 1916 between the armies of Bulgaria and Romania...
and Cobadin
First Battle of Cobadin
The First Battle of Cobadin, also known as the First Battle of the Rasova - Cobadin - Tuzla Line was a battle fought from 17 to 19 of September 1916 between the Bulgarian Third Army and the Russo - Romanian Army of the Dobrogea...
but after serious conflicts with the German
Germany
Germany , officially the Federal Republic of Germany , is a federal parliamentary republic in Europe. The country consists of 16 states while the capital and largest city is Berlin. Germany covers an area of 357,021 km2 and has a largely temperate seasonal climate...
General August von Mackensen
August von Mackensen
Anton Ludwig August von Mackensen , born August Mackensen, was a German soldier and field marshal. He commanded with success during the First World War and became one of the German Empire's most prominent military leaders. After the Armistice, Mackensen was interned for a year...
he was shifted with General Stefan Nerezov
Stefan Nerezov
Stefan Mikhailov Nerezov was a Bulgarian General and Chief of the Bulgarian Army Staff.-Biography:Stefan Nerezov was born in Sevlievo, at the time part of the Ottoman Empire...
. Toshev was appointed governor of Macedonia
Macedonia (region)
Macedonia is a geographical and historical region of the Balkan peninsula in southeastern Europe. Its boundaries have changed considerably over time, but nowadays the region is considered to include parts of five Balkan countries: Greece, the Republic of Macedonia, Bulgaria, Albania, Serbia, as...
. On 25 March 1917 he was promoted General of the Infantry - the highest military post in Bulgaria.

In 1918 Toshev commanded 4th Army and from June 1919 went into the reserve. Between 1923-1924 he was a chairman of the "Association of the reserve officers". In October 1923 he led the "Narodna Priznatelnost" committee whose aim was to make assistance for the victims if the September Uprising
September Uprising
The September Uprising was an armed insurgency staged in September 1923 by the Bulgarian Communist Party under Comintern pressure, as an attempt to overthrow the Democratic Accord government of Bulgaria that had come to power with the coup d'état of June 9. Besides its communist base, the...
.

General Stefan Toshev died on 27 November 1924 in Plovdiv
Plovdiv
Plovdiv is the second-largest city in Bulgaria after Sofia with a population of 338,153 inhabitants according to Census 2011. Plovdiv's history spans some 6,000 years, with traces of a Neolithic settlement dating to roughly 4000 BC; it is one of the oldest cities in Europe...
and was buried in Sofia
Sofia
Sofia is the capital and largest city of Bulgaria and the 12th largest city in the European Union with a population of 1.27 million people. It is located in western Bulgaria, at the foot of Mount Vitosha and approximately at the centre of the Balkan Peninsula.Prehistoric settlements were excavated...
. One town (General Toshevo
General Toshevo
General Toshevo is a town in northeastern Bulgaria, part of Dobrich Province. Located in the historic region of Southern Dobruja, it is the administrative centre of the homonymous municipality and was named after the noted Bulgarian General Stefan Toshev...
) and a village are named after him.