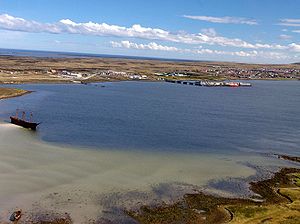 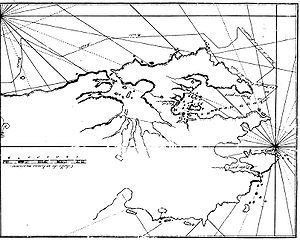 It serves the town of the same name - Stanley
Stanley, Falkland Islands
Stanley is the capital and only true cityin the Falkland Islands. It is located on the isle of East Falkland, on a north-facing slope in one of the wettest parts of the islands. At the 2006 census, the city had a population of 2,115...
- as a harbour. Stanley has sprawled along the south shore of the harbour, to gain shelter from the low hill of Stanley Common. As such this is the busiest waterway of the Falkland Islands
Falkland Islands
The Falkland Islands are an archipelago in the South Atlantic Ocean, located about from the coast of mainland South America. The archipelago consists of East Falkland, West Falkland and 776 lesser islands. The capital, Stanley, is on East Falkland...
and frequently visited by cruise ship
Cruise ship
A cruise ship or cruise liner is a passenger ship used for pleasure voyages, where the voyage itself and the ship's amenities are part of the experience, as well as the different destinations along the way...
s, freighters and navy vessels, although this has lessened since the building of the two airports at RAF Mount Pleasant
RAF Mount Pleasant
RAF Mount Pleasant is a military base for the Royal Air Force in the British Overseas Territory of the Falkland Islands. The facility is part of the British Forces South Atlantic Islands...
and Port Stanley Airport
Port Stanley Airport
Port Stanley Airport is a STOLport in the Falkland Islands, two miles outside the capital, Stanley. The airport is the only civilian airport in the islands with a paved runway...
. It was formerly, and still is to some extent, a repair yard for vessels damaged in South Atlantic storms, or needing to restock.

The peninsula on which Canopus Hill, Port Stanley Airport
Port Stanley Airport
Port Stanley Airport is a STOLport in the Falkland Islands, two miles outside the capital, Stanley. The airport is the only civilian airport in the islands with a paved runway...
and Gypsy Cove
Gypsy Cove
Gypsy Cove and Yorke Bay are a pair of small bays in the Falkland Islands. They are on East Falkland. Gypsy Cove is four miles from Stanley, and can be reached by local bus which runs every hour....
lie, together with a narrow spit of land known as Navy Point, effectively divides Port William from Stanley Harbour. This in turn creates a small bay in Stanley Harbour known as the Canache, which is bridged at one end.

Stanley Harbour is effectively the enlarged estuary of Moody Brook
Moody Brook
Moody Brook is a small watercourse that flows into Stanley Harbour on East Falkland, Falkland Islands. It is near Stanley, just to the north west, and was formerly the location of the town barracks, which were attacked in Operation Azul, the 1982 Argentine Invasion of the Falkland Islands.It is...
, which flows into it at the west end. It was enlarged as the result of glacial action.

Stanley Harbour has experienced a number of shipwrecks. The remains of the following can still be seen -

Stanley Harbour was originally known as Beau Port (French
French language
French is a Romance language spoken as a first language in France, the Romandy region in Switzerland, Wallonia and Brussels in Belgium, Monaco, the regions of Quebec and Acadia in Canada, and by various communities elsewhere. Second-language speakers of French are distributed throughout many parts...
), later Port Jackson, and has sometimes been known as "Port Stanley".

After the Graf Spee concentrated fire upon the Exeter inflicting some 40 direct hits and causing major damage. On the 16 December, Exeter limped into Stanley Harbour, with 60 of the 600 crew dead and 49 wounded. The crew had to be boarded out in Stanley as Exeter was too badly damaged.


Falklands War and after

In the aftermath of the Falklands War, Stanley Harbour was the departure point for many of the Argentine POWs being transported back to continental Argentina.

Due to the lack of accommodation, for a while, British troops were billetted on boats in the harbour. This continued until adequate provision was made elsewhere.

Due to the construction of a port at Mare Harbour
Mare Harbour
Mare Harbour Mare Harbour Mare Harbour (Spanish: Puerto Yegua is a small settlement on East Falkland, on Choiseul Sound. It is mostly used as a port facility and depot for RAF Mount Pleasant, as well as a deepwater port used by the Royal Navy ships patrolling the South Atlantic and Antarctica,...
, Stanley Harbour no longer deals with much military transport. Instead, it is mainly used as the main freight gateway to the islands, and is visited frequently by cruise ship
Cruise ship
A cruise ship or cruise liner is a passenger ship used for pleasure voyages, where the voyage itself and the ship's amenities are part of the experience, as well as the different destinations along the way...
s.
The source of this article is wikipedia, the free encyclopedia.  The text of this article is licensed under the GFDL.