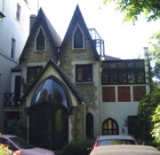 St John's Wood is a district of north-west London
London
London is the capital city of :England and the :United Kingdom, the largest metropolitan area in the United Kingdom, and the largest urban zone in the European Union by most measures. Located on the River Thames, London has been a major settlement for two millennia, its history going back to its...
, England, in the City of Westminster
City of Westminster
The City of Westminster is a London borough occupying much of the central area of London, England, including most of the West End. It is located to the west of and adjoining the ancient City of London, directly to the east of the Royal Borough of Kensington and Chelsea, and its southern boundary...
, and at the north-west end of Regent's Park
Regent's Park
Regent's Park is one of the Royal Parks of London. It is in the north-western part of central London, partly in the City of Westminster and partly in the London Borough of Camden...
. It is approximately 2.5 miles north-west of Charing Cross
Charing Cross
Charing Cross denotes the junction of Strand, Whitehall and Cockspur Street, just south of Trafalgar Square in central London, England. It is named after the now demolished Eleanor cross that stood there, in what was once the hamlet of Charing. The site of the cross is now occupied by an equestrian...
. Once part of the Great Middlesex Forest
Forest of Middlesex
The Forest of Middlesex was an ancient woodland covering much of the county of Middlesex, England that was north of the City of London and now forms the northern part of Greater London. A path was cut through the forest for the creation of Watling Street. At its ancient extent the forest stretched...
, it was later owned by the Knights of St John of Jerusalem
Knights Hospitaller
The Sovereign Military Hospitaller Order of Saint John of Jerusalem of Rhodes and of Malta , also known as the Sovereign Military Order of Malta , Order of Malta or Knights of Malta, is a Roman Catholic lay religious order, traditionally of military, chivalrous, noble nature. It is the world's...
. It is home to some of the most expensive properties in the world.

St John's Wood was developed from the early 19th century onwards. It was one of the first London suburbs to be developed with a large amount of low density "villa" housing, as opposed to the terraced housing
Terraced house
In architecture and city planning, a terrace house, terrace, row house, linked house or townhouse is a style of medium-density housing that originated in Great Britain in the late 17th century, where a row of identical or mirror-image houses share side walls...
which was the norm in London up to the 19th century, even in expensive districts. Parts of St John's Wood have been rebuilt at a higher density, but it remains a highly desirable residential district, and one of the most expensive areas of London.

St John's Wood is the location of Lord's
Lord's Cricket Ground
Lord's Cricket Ground is a cricket venue in St John's Wood, London. Named after its founder, Thomas Lord, it is owned by Marylebone Cricket Club and is the home of Middlesex County Cricket Club, the England and Wales Cricket Board , the European Cricket Council and, until August 2005, the...
Cricket
Cricket
Cricket is a bat-and-ball game played between two teams of 11 players on an oval-shaped field, at the centre of which is a rectangular 22-yard long pitch. One team bats, trying to score as many runs as possible while the other team bowls and fields, trying to dismiss the batsmen and thus limit the...
Ground, home of Middlesex County Cricket Club
Middlesex County Cricket Club
Middlesex County Cricket Club is one of the 18 major county clubs which make up the English and Welsh domestic cricket structure, representing the historic county of Middlesex. It was announced in February 2009 that Middlesex changed their limited overs name from the Middlesex Crusaders, to the...
and the Marylebone Cricket Club
Marylebone Cricket Club
Marylebone Cricket Club is a cricket club in London founded in 1787. Its influence and longevity now witness it as a private members' club dedicated to the development of cricket. It owns, and is based at, Lord's Cricket Ground in St John's Wood, London NW8. MCC was formerly the governing body of...
(MCC), and original headquarters of the sport. It is also famous for Abbey Road Studios
Abbey Road Studios
Abbey Road Studios is a recording studio located at 3 Abbey Road, St John's Wood, City of Westminster, London, England. It was established in November 1931 by the Gramophone Company, a predecessor of British music company EMI, its present owner...
and the street Abbey Road
Abbey Road (street)
Abbey Road is a thoroughfare located in the borough of Camden and the City of Westminster in London, running roughly northwest to southeast through St. John's Wood, near Lord's Cricket Ground...
, where The Beatles
The Beatles
The Beatles were an English rock band, active throughout the 1960s and one of the most commercially successful and critically acclaimed acts in the history of popular music. Formed in Liverpool, by 1962 the group consisted of John Lennon , Paul McCartney , George Harrison and Ringo Starr...
recorded, notably the Abbey Road album, the cover of which features the band crossing
Pedestrian crossing
A pedestrian crossing or crosswalk is a designated point on a road at which some means are employed to assist pedestrians wishing to cross. They are designed to keep pedestrians together where they can be seen by motorists, and where they can cross most safely across the flow of vehicular traffic...
the road. Paul McCartney
Paul McCartney
Sir James Paul McCartney, MBE, Hon RAM, FRCM is an English musician, singer-songwriter and composer. Formerly of The Beatles and Wings , McCartney is listed in Guinness World Records as the "most successful musician and composer in popular music history", with 60 gold discs and sales of 100...
has owned a property in the area since the 1960s along with many other famous music and film stars.

The King's Troop, Royal Horse Artillery has a barracks in St. John's Wood and regularly exercises their horses by parading them through the streets of St. John's Wood.

Philosopher A.J. Ayer was born and grew up in the area, as did Chef Clarissa Dickson Wright, and the former Wrights' home is now home to supermodel Kate Moss
Kate Moss
Kate Moss is an English model. Moss is known for her waifish figure and popularising the heroin chic look in the 1990s. She is also known for her controversial private life, high profile relationships, party lifestyle, and drug use. Moss changed the look of modelling and started a global debate on...
. Actor Damian Lewis
Damian Lewis
Lewis was born in St John's Wood, London, the son of Charlotte Mary and J. Watcyn Lewis, a City broker. His paternal grandparents were Welsh. His maternal grandfather was Lord Mayor of London Ian Frank Bowater and his maternal grandmother's ancestors include Bertrand Dawson, 1st Viscount Dawson of...
was born in St John's Wood. The Rolling Stones referenced it in their song "Play With Fire
Play with Fire (The Rolling Stones song)
"Play with Fire" is a song by English rock and roll band The Rolling Stones, originally released as B-side to the song "The Last Time". It was later included on the American release of their 1965 album Out of Our Heads....
". Keith Richards of the Rolling Stones lived on Carlton Hill, at the northern edge of St John's Wood, in the 1960s, as detailed in his 2010 autobiography, "Life". The director, wit and physician Jonathan Miller
Jonathan Miller
Sir Jonathan Wolfe Miller CBE is a British theatre and opera director, author, physician, television presenter, humorist and sculptor. Trained as a physician in the late 1950s, he first came to prominence in the 1960s with his role in the comedy revue Beyond the Fringe with fellow writers and...
was born into a wealthy family in the area. The British World War II
World War II
World War II, or the Second World War , was a global conflict lasting from 1939 to 1945, involving most of the world's nations—including all of the great powers—eventually forming two opposing military alliances: the Allies and the Axis...
flier Douglas Bader
Douglas Bader
Group Captain Sir Douglas Robert Steuart Bader CBE, DSO & Bar, DFC & Bar, FRAeS, DL was a Royal Air Force fighter ace during the Second World War. He was credited with 20 aerial victories, four shared victories, six probables, one shared probable and 11 enemy aircraft damaged.Bader joined the...
was born in St. John's Wood.