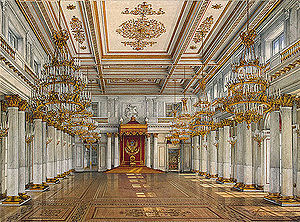 St George's Hall is one of the largest state rooms in the Winter Palace
Winter Palace
The Winter Palace in Saint Petersburg, Russia, was, from 1732 to 1917, the official residence of the Russian monarchs. Situated between the Palace Embankment and the Palace Square, adjacent to the site of Peter the Great's original Winter Palace, the present and fourth Winter Palace was built and...
, St Petersburg. It is located on the eastern side of the palace, and connected to The Hermitage
Hermitage Museum
The State Hermitage is a museum of art and culture in Saint Petersburg, Russia. One of the largest and oldest museums of the world, it was founded in 1764 by Catherine the Great and has been opened to the public since 1852. Its collections, of which only a small part is on permanent display,...
by the smaller Apollo Room.

The colourful, neoclassical
Neoclassicism
Neoclassicism is the name given to Western movements in the decorative and visual arts, literature, theatre, music, and architecture that draw inspiration from the "classical" art and culture of Ancient Greece or Ancient Rome...
interior design of this great hall, executed by Giacomo Quarenghi
Giacomo Quarenghi
Giacomo Quarenghi was the foremost and most prolific practitioner of Palladian architecture in Imperial Russia, particularly in Saint Petersburg.- Career in Italy :...
between 1787 and 1795, was lost in the fire of 1837 which gutted much of the palace's interior. Following the fire, Russian architect Vasily Stasov
Vasily Stasov
Vasily Petrovich Stasov was a Russian architect.-Biography:Stasov was born in Moscow....
was commissioned to oversee the restoration and rebuilding of the palace. While he retained the architectural features dictated by the exterior of the palace, he completely redesigned the interior in a more simple classical style. He replaced the columns of polychrome
Polychrome
Polychrome is one of the terms used to describe the use of multiple colors in one entity. It has also been defined as "The practice of decorating architectural elements, sculpture, etc., in a variety of colors." Polychromatic light is composed of a number of different wavelengths...
marble with those of white cararra marble. The original painted ceilings, depicting allegorical scenes, had been entirely lost in the fire, allowing Stasov to introduce a plain ceiling with gilded embellishments.

St George's Hall, which served as the palace's principal throne room
Throne room
A throne room is the room, often rather a hall, in the official residence of the crown, either a palace or a fortified castle, where the throne of a senior figure is set up with elaborate pomp— usually raised, often with steps, and under a canopy, both of which are part of the original notion of...
, was the scene of many of the most formal ceremonies of the Imperial court. Most historically, it was the setting of the opening of the First State Duma
State Duma of the Russian Empire
The State Duma of the Russian Empire was a legislative assembly in the late Russian Empire, which met in the Taurida Palace in St. Petersburg. It was convened four times between 1906 and the collapse of the Empire in 1917.-History:...
by Nicholas II
Nicholas II of Russia
Nicholas II was the last Emperor of Russia, Grand Prince of Finland, and titular King of Poland. His official short title was Nicholas II, Emperor and Autocrat of All the Russias and he is known as Saint Nicholas the Passion-Bearer by the Russian Orthodox Church.Nicholas II ruled from 1894 until...
, in 1906. The Tsar was forced to agree to the establishment of a Duma
Duma
A Duma is any of various representative assemblies in modern Russia and Russian history. The State Duma in the Russian Empire and Russian Federation corresponds to the lower house of the parliament. Simply it is a form of Russian governmental institution, that was formed during the reign of the...
as a concession to his people in an attempt to avert revolution. However, the Imperial family saw it as "the end of Russian autocracy".

It was the first time that ordinary Russians had been admitted to the palace in any number—a surreal
Surrealism
Surrealism is a cultural movement that began in the early 1920s, and is best known for the visual artworks and writings of the group members....
experience for both the peasants and the Imperial family. The Tsar's sister, who stood with the Imperial family on the steps of the throne, recalled of the masses of ordinary Russians who packed the hall: "I went with my mother to the first Duma. I remember the large group of deputies from among peasants and factory people. The peasants looked sullen. But the workmen were worse: they looked as though they hated us. I remember the distress in Alicky's eyes." Minister of the Court Count Fredericks commented, "The Deputies, they give one the impression of a gang of criminals who are only waiting for the signal to throw themselves upon the ministers and cut their throats. I will never again set foot among those people." The Dowager Empress noticed "incomprehensible hatred."

Located behind the throne is the small Apollo Room. This anteroom is in fact the upper floor of a bridge linking the palace to the Hermitage. This room has a caisson ceiling adorned with stucco work.