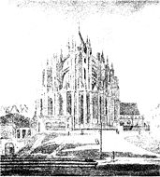 St. Maria ad Gradus is the name of a former church located East of the Cathedral of Cologne
Cologne Cathedral
Cologne Cathedral is a Roman Catholic church in Cologne, Germany. It is the seat of the Archbishop of Cologne and the administration of the Archdiocese of Cologne. It is renowned monument of German Catholicism and Gothic architecture and is a World Heritage Site...
, Germany, situated between the cathedral and the Rhine.

Founded by Herman II, Archbishop of Cologne, the church was the burial site of blessed Richeza of Lotharingia (died March 1063), a former Queen of Poland and a grandchild of Otto II, Holy Roman Emperor
Otto II, Holy Roman Emperor
Otto II , called the Red, was the third ruler of the Saxon or Ottonian dynasty, the son of Otto the Great and Adelaide of Italy.-Early years and co-ruler with Otto I:...
and his wife Theophanu
Theophanu
Theophanu , also spelled Theophania, Theophana or Theophano, was born in Constantinople, and was the wife of Otto II, Holy Roman Emperor.-Family:...
. The Romanesque building, 55m long and 42m wide, was probably completed in 1075, when the relics of St. Agilulfus of Cologne (died 750) were transferred there. Already in 1080 it burned down, but was rebuilt in 1085 and later expanded.

Following the French occupation of the Rhineland since 1794, monasteries and cleric organisations had to be dissolved, churches were left abandoned. As it was too close to other churches (Groß St. Martin, Cathedral, St. Andreas), Maria ad Gradus was demolished in 1817 and 1827 when the area surrounding the Cathedral was cleared to make way for its restoration and completion. Only small parts remain, like a column.