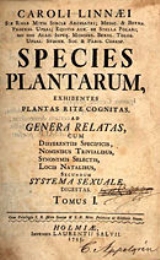 Encyclopedia
Species Plantarum was first published in 1753, as a two-volume work by Carl Linnaeus. Its prime importance is perhaps that it is the primary starting point of plant nomenclature
Botanical nomenclature
Botanical nomenclature is the formal, scientific naming of plants. It is related to, but distinct from taxonomy. Plant taxonomy is concerned with grouping and classifying plants; botanical nomenclature then provides names for the results of this process. The starting point for modern botanical...
as it exists today. This means that the first names to be considered validly published in botany are those that appear in this book and his Genera Plantarum
Genera Plantarum
Genera Plantarum is a publication of Swedish naturalist Carl Linnaeus . The fifth edition served as a complementary volume to Species Plantarum . Article 13 of the International Code of Botanical Nomenclature states that "It is agreed to associate generic names which first appear in Linnaeus'...
ed. 5 (1753). In the book Linnaeus listed all plants known to him, directly or from his extensive reading.

The classification employed in the work allowed easy identification of plants, by placing every genus
Genus
In biology, a genus is a low-level taxonomic rank used in the biological classification of living and fossil organisms, which is an example of definition by genus and differentia...
into an artificial class
Class (biology)
In biological classification, class is* a taxonomic rank. Other well-known ranks are life, domain, kingdom, phylum, order, family, genus, and species, with class fitting between phylum and order...
and order
Order (biology)
In scientific classification used in biology, the order is# a taxonomic rank used in the classification of organisms. Other well-known ranks are life, domain, kingdom, phylum, class, family, genus, and species, with order fitting in between class and family...
. By counting pistils and stamens, anybody, even without much knowledge of plants, was able to get to a listing of genera that the plant in question should belong to.

Linnaeus gave a formal multiple-word description to each plant and an additional epithet to be used with the genus for easier reference, thus separating taxonomy
Alpha taxonomy
Alpha taxonomy is the discipline concerned with finding, describing and naming species of living or fossil organisms. This field is supported by institutions holding collections of these organisms, with relevant data, carefully curated: such institutes include natural history museums, herbaria and...
from nomenclature. For example, the tomato
Tomato
The word "tomato" may refer to the plant or the edible, typically red, fruit which it bears. Originating in South America, the tomato was spread around the world following the Spanish colonization of the Americas, and its many varieties are now widely grown, often in greenhouses in cooler...
was described (page 185) as SOLANUM caule inermi herbaceo foliis pinnatis incisis, racemis simplicibus. The given epithet was Lycopersicum.

This was the first consistent use of naming structure for plants, and laid the basis for modern nomenclature. The binary name SOLANUM Lycopersicum (now rendered Solanum lycopersicum) very soon took over in usage because of its brevity, and the multiple-word definitions were no longer treated as formal names.

After its first edition, this work went through several editions, continuing after the death of its original author. Species Plantarum also marks the starting point of a great upsurge in the popularity of science
Science
Science is a systematic enterprise that builds and organizes knowledge in the form of testable explanations and predictions about the universe...
, and arguably is amongst the most important publications in biology
Biology
Biology is a natural science concerned with the study of life and living organisms, including their structure, function, growth, origin, evolution, distribution, and taxonomy. Biology is a vast subject containing many subdivisions, topics, and disciplines...
ever.