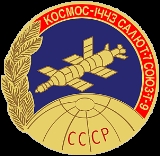 Failed to dock with Salyut 7 due to problems with automated docking system. First failure to dock at a space station since Soyuz 33
Soyuz 33
-Backup crew:-Mission parameters:*Mass: *Perigee: *Apogee: *Inclination: 51.63°*Period: 88.99 minutes-Mission highlights:...
in 1979.

Once in orbit the Soyuz rendezvous radar antenna boom failed to deploy properly. Several attitude control maneuvers at high rates were made but failed to swing the boom out. (The postflight inquiry later discovered that the antenna had been torn off when the Soyuz payload shroud separated.) The crew believed the boom remained attached to the spacecraft’s orbital module, and that it had not locked into place. Accordingly, they shook the spacecraft using its attitude thrusters in an effort to rock it forward so it could lock. With FCC permission, the crew attempted a rendezvous using only an optical sight and ground radar inputs for guidance. During the final approach, which was made in darkness, Titov believed that the closing speed was too great. He therefore attempted a braking maneuver, but felt that the two spacecraft were still closing too fast. He aborted the rendezvous to avoid a crash, and no further attempts were made. The abortive docking attempts consumed much propellant. To ensure that enough would remain to permit deorbit, the cosmonauts shut down the attitude control system and put Soyuz T-8 into a spinstabilized mode of the type used by Soyuz Ferries in the early 1970s. The three men returned to Earth after a flight lasting just 2 days, 17 minutes, 48 seconds and landing occurred as normal.
The source of this article is wikipedia, the free encyclopedia.  The text of this article is licensed under the GFDL.