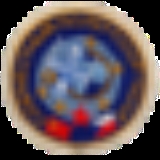 The main function of the EP-1 mission was to swap Soyuz craft with the orbiting crew, in so doing freeing a docking port for a forthcoming supply tanker. Cosmonauts Vladimir Dzhanibekov
Vladimir Dzhanibekov
Vladimir Aleksandrovich Dzhanibekov is a former cosmonaut who made five flights.He was born in the remote area of Iskandar in Tashkent Province, Uzbekistan. He changed his surname from Krysin when he married to honor his wife's family, which was noble kin of the descendants of the medieval Kazakh...
and Oleg Makarov returned to earth in the Soyuz 26
Soyuz 26
Soyuz 26 was Soviet manned mission, used to launch the crew of Salyut 6 EO-1, the first long duration crew on the space station Salyut 6.The Soyuz spacecraft was launched on December 10, 1977, and docked with the space station the next day...
spacecraft after spending five days on the station.