In keeping with its origins as a teachers college, Southern Connecticut State University remains a center for teacher education. It produces more teachers, principals, and school superintendents than any other Connecticut institution. The university received approval for its first doctoral program, an Ed.D. in Educational Leadership. 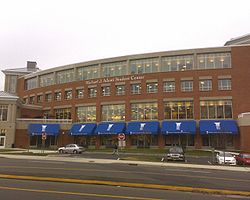 Founders Gate, between Lyman Center and Engleman Hall, is a physical link to Southern's early Howe Street campus> The gate was restored and moved to the Crescent Street campus, and dedicated during Homecoming in 1987.


~currently scheduled to be demolished once the "Old Student Center" is finished being renevated.

For more information on residence life, go to http://www.southernct.edu/residencelife/


Other Buildings on Campus

The schools sports teams are nicknamed The Owls.

On March 24, 2007, the women's basketball
Basketball
Basketball is a team sport in which two teams of five players try to score points by throwing or "shooting" a ball through the top of a basketball hoop while following a set of rules...
team won the NCAA Division II championships. In a 61–45 victory, SCSU beat the previously undefeated Florida Gulf Coast.http://www.ncaasports.com/basketball/womens/recaps/d2_0324_01/2007.

The Swimming and Diving Team, a less publlicized team, has scored their highest at the NCAA championship meet in March for the years 2007 and 2008. This year they hope to score even higher and crack the top ten Div. II teams in the nation.

Formerly known as WOWL and WSCB. Web site. WSIN stands for "Southern Independent Network." Shows are broadcast live from the Michael J. Adanti student center. In 2007 a group of students from WSIN traveled to the NCAA DII Championchips to broadcast the games when the Womens Basketball team was in the final rounds of the tournament

The Southern News is a weekly newspaper
Newspaper
A newspaper is a scheduled publication containing news of current events, informative articles, diverse features and advertising. It usually is printed on relatively inexpensive, low-grade paper such as newsprint. By 2007, there were 6580 daily newspapers in the world selling 395 million copies a...
covering news, opinions, arts, entertainment and sports. The publication consists of 14 paid staff members, uses work from journalism students and non-journalism majors.

In May 2011, Southern started a two-year renovation project of the "Old Student Center". When the project is finished, it will be home to the School of Business, which is moving out of Seabury Hall.

Renovation over the past year and a half on Farnham Hall ended at the beginning of the Fall 2011 semester. The building has a new exterior, renovated lobbies, a basement which is being turned into a programming space, and a computer lab. The bathrooms in the hall were renovated a few years ago.


Other schools in the Connecticut State University system