What plants and animals are native to south central United States?
More 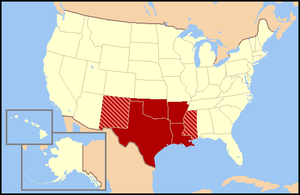 The climate varies from the semi-tropical in the Mississippi Delta
Mississippi Delta
The Mississippi Delta is the distinctive northwest section of the U.S. state of Mississippi that lies between the Mississippi and Yazoo Rivers. The region has been called "The Most Southern Place on Earth" because of its unique racial, cultural, and economic history...
, South Louisiana, and Southeast Texas
Southeast Texas
Southeast Texas is a subregion of East Texas located in the southeast corner of the U.S. state of Texas. The subregion is geographically centered around the Houston–Sugar Land–Baytown and Beaumont–Port Arthur metropolitan areas...
, to the dry Chihuahuan desert
Chihuahuan Desert
The Chihuahuan Desert is a desert, and an ecoregion designation, that straddles the U.S.-Mexico border in the central and northern portions of the Mexican Plateau, bordered on the west by the extensive Sierra Madre Occidental range, and overlaying northern portions of the east range, the Sierra...
in West Texas
West Texas
West Texas is a vernacular term applied to a region in the southwestern quadrant of the United States that primarily encompasses the arid and semi-arid lands in the western portion of the state of Texas....
and southern New Mexico. The southeastern portions include the Appalachian mountains in Alabama and Tennessee and the Piney Woods
Piney Woods
The Piney Woods is a temperate coniferous forest terrestrial ecoregion in the Southern United States covering of East Texas, southern Arkansas, western Louisiana, and southeastern Oklahoma. These coniferous forests are dominated by several species of pine as well as hardwoods including hickory and...
of East Texas
East Texas
East Texas is a distinct geographic and ecological area in the U.S. state of Texas.According to the Handbook of Texas, the East Texas area "may be separated from the rest of Texas roughly by a line extending from the Red River in north central Lamar County southwestward to east central Limestone...
, Louisiana, and southern Arkansas and the Mississippi Delta. Large portion of the northeastern quarter of the region is mountainous, with the Ozark and Ouachita Mountains
Ouachita Mountains
The Ouachita Mountains are a mountain range in west central Arkansas and southeastern Oklahoma. The range's subterranean roots may extend as far as central Texas, or beyond it to the current location of the Marathon Uplift. Along with the Ozark Mountains, the Ouachita Mountains form the U.S...
of Arkansas and eastern Oklahoma. The northwest quarter of the region is dominated by the Great Plains
Great Plains
The Great Plains are a broad expanse of flat land, much of it covered in prairie, steppe and grassland, which lies west of the Mississippi River and east of the Rocky Mountains in the United States and Canada. This area covers parts of the U.S...
which become progressively drier west of 100° W,
forming the North American Llano
Llano
Llano is the Spanish word for plain. It may refer to:* Llano, California* Llano Estacado, a region in northwest Texas and eastern New Mexico* Llano, Texas, a small city in Llano County, Texas* Llano County, Texas* Llano River, a Texan river...
. The southwestern portions border the Rio Grande
Rio Grande
The Rio Grande is a river that flows from southwestern Colorado in the United States to the Gulf of Mexico. Along the way it forms part of the Mexico – United States border. Its length varies as its course changes...
, and are generally drier than other areas of the South Central United States, Central Texas having the most annual precipitation.

Texas is the largest South Central state by both area and population—even when New Mexico is included. Texas is still home to over half the region's population. The largest city in the region—Houston; is located in Texas
Texas
Texas is the second largest U.S. state by both area and population, and the largest state by area in the contiguous United States.The name, based on the Caddo word "Tejas" meaning "friends" or "allies", was applied by the Spanish to the Caddo themselves and to the region of their settlement in...
. New Orleans
New Orleans metropolitan area
New Orleans–Metairie–Kenner, or the Greater New Orleans Region is a metropolitan area designated by the United States Census encompassing seven parishes in the state of Louisiana, centering on the city of New Orleans...
was tied with Oklahoma City but, after Hurricane Katrina
Hurricane Katrina
Hurricane Katrina of the 2005 Atlantic hurricane season was a powerful Atlantic hurricane. It is the costliest natural disaster, as well as one of the five deadliest hurricanes, in the history of the United States. Among recorded Atlantic hurricanes, it was the sixth strongest overall...
, the population of the New Orleans metro area has declined to approximately 900,000 (a survey shows that the population has bounced back to almost 1.2 million as of April 2007).

The history of the South Central states is dominated by the conflict and interaction between three cultural-linguistic groups: the Anglosphere
Anglosphere
Anglosphere is a neologism which refers to those nations with English as the most common language. The term can be used more specifically to refer to those nations which share certain characteristics within their cultures based on a linguistic heritage, through being former British colonies...
(first Great Britain
Great Britain
Great Britain or Britain is an island situated to the northwest of Continental Europe. It is the ninth largest island in the world, and the largest European island, as well as the largest of the British Isles...
and then the United States), the Hispanidad
Hispanic
Hispanic is a term that originally denoted a relationship to Hispania, which is to say the Iberian Peninsula: Andorra, Gibraltar, Portugal and Spain. During the Modern Era, Hispanic sometimes takes on a more limited meaning, particularly in the United States, where the term means a person of ...
(first Spain
Spain
Spain , officially the Kingdom of Spain languages]] under the European Charter for Regional or Minority Languages. In each of these, Spain's official name is as follows:;;;;;;), is a country and member state of the European Union located in southwestern Europe on the Iberian Peninsula...
then Mexico
Mexico
The United Mexican States , commonly known as Mexico , is a federal constitutional republic in North America. It is bordered on the north by the United States; on the south and west by the Pacific Ocean; on the southeast by Guatemala, Belize, and the Caribbean Sea; and on the east by the Gulf of...
), and the Francophonie (always France). In the 17th and 18th centuries Spain and France maneuvered for control of Texas, with the Spanish based in Mexico and New Mexico and the French in Louisiana. During the War of the Quadruple Alliance
War of the Quadruple Alliance
The War of the Quadruple Alliance was a result of the ambitions of King Philip V of Spain, his wife, Elisabeth Farnese, and his chief minister Giulio Alberoni to retake territories in Italy and to claim the French throne. It saw the defeat of Spain by an alliance of Britain, France, Austria , and...
hostilities spread to the New World
New World
The New World is one of the names used for the Western Hemisphere, specifically America and sometimes Oceania . The term originated in the late 15th century, when America had been recently discovered by European explorers, expanding the geographical horizon of the people of the European middle...
and the French troops from Natchitoches
Natchitoches, Louisiana
Natchitoches is a city in and the parish seat of Natchitoches Parish, Louisiana, United States. Established in 1714 by Louis Juchereau de St. Denis as part of French Louisiana, the community was named after the Natchitoches Indian tribe. The City of Natchitoches was first incorporated on February...
briefly captured the capital of Spanish Texas
Spanish Texas
Spanish Texas was one of the interior provinces of New Spain from 1690 until 1821. Although Spain claimed ownership of the territory, which comprised part of modern-day Texas, including the land north of the Medina and Nueces Rivers, the Spanish did not attempt to colonize the area until after...
, Los Adaes
Los Adaes
Los Adaes was the capital of Tejas on the northeastern frontier of New Spain from 1729 to 1770. It included a mission, San Miguel de Linares de los Adaes, and a presidio, Nuestra Señora del Pilar de Los Adaes . The site is located in the present-day Natchitoches Parish, Louisiana. The Los Adaes...
in what is now western Louisiana. The French were not able to wrest control of Texas from Spain, and by the early 19th century sold their North American holdings to the United States in the Louisiana Purchase
Louisiana Purchase
The Louisiana Purchase was the acquisition by the United States of America of of France's claim to the territory of Louisiana in 1803. The U.S...
, which comprised slightly less than half of what is today the South Central United States.

The official West and East South Central states of Texas, Arkansas, Louisiana, Mississippi, Alabama and Tennessee were members of the Confederacy
Confederate States of America
The Confederate States of America was a government set up from 1861 to 1865 by 11 Southern slave states of the United States of America that had declared their secession from the U.S...
during the Civil War. Kentucky was often considered a "non-official" Confederate state. Oklahoma, although Indian Territory
Indian Territory
The Indian Territory, also known as the Indian Territories and the Indian Country, was land set aside within the United States for the settlement of American Indians...
at the time, was home to 5 Native-American tribes, of which a majority allied themselves with the Confederacy. Thus, all these states are usually considered to make up a large part of the American South both historically and culturally, as well as classified by the U.S. Census Bureau.
The source of this article is wikipedia, the free encyclopedia.  The text of this article is licensed under the GFDL.