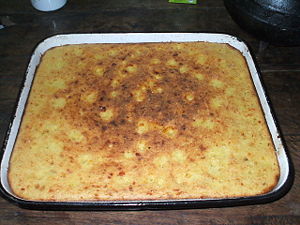 Sopa paraguaya is a traditional Paraguayan food. Literally meaning "Paraguayan soup", sopa paraguaya is similar to corn bread. Corn flour, pig fat, cheese and milk or whey
Whey
Whey or Milk Serum is the liquid remaining after milk has been curdled and strained. It is a by-product of the manufacture of cheese or casein and has several commercial uses. Sweet whey is manufactured during the making of rennet types of hard cheese like cheddar or Swiss cheese...
are common ingredients. It is a spongy cake rich in caloric and protein content.

According the Paraguayan folklorist Margarita Miró Ibars, sopa paraguaya is "the product of Guaraní-Spanish syncretism. The Guaraníes used to consume doughy food made of corn or manioc flour, wrapped in güembe or banana
Banana
Banana is the common name for herbaceous plants of the genus Musa and for the fruit they produce. Bananas come in a variety of sizes and colors when ripe, including yellow, purple, and red....
leaves and cooked between hot ashes. The Spanish introduced cheese, eggs and milk, which were added to the food made by the Guaraníes..."

Sopa is similar to another corn based Paraguayan typical dish, chipahuazu or chipaguazu, except that the latter is made with fresh corn. The consistency is a little bit more like a cheesy souffle
Soufflé
A soufflé is a light baked cake made with egg yolks and beaten egg whites combined with various other ingredients and served as a savoury main dish or sweetened as a dessert...
and less like a savory cornbread
Cornbread
Cornbread is a generic name for any number of quick breads containing cornmeal and leavened by baking powder.-History:Native Americans were using ground corn for food thousands of years before European explorers arrived in the New World...
. This dish is often served with a paraguayan beef soup.


History and origin of the name

The most credible story of the origin of the dish involves Don Carlos Antonio López (the founder of the Paraguayan state and president of the country between 1841 and 1862) and one of his cooks (called "machú" in Guarani language).

It is said that the great governor, a famously obese man, liked the a white soup elaborated with milk, Paraguay cheese (fresh cheese), egg and corn flour. One day the machú mistakenly put too much corn flour to the mixture. Near noon, she found herself with two problems: first, the mixture was too thick for tykuetî; and second, she didn't have time to start over the process, or replace the favorite dish with another. So, showing off a decided attitude, a mix of fear and wit, she poured the mixture into an iron container and cooked it in the "tatakua" (the Guarani word for "hole of fire", a rustic oven made of clay and adobe), from which she obtained a "solid soup". Don Carlos, after tasting it, found it very delicious and immediately named it "sopa paraguaya".

In some places it is also called "Paraguay Soup".

Other varieties, such as "sopa paraguaya de estancia" use almost the same ingredients, only varying the quantities so as to vary the consistency and make the dish more or less greasy, according to taste.

Traditional preparation of sopa paraguaya follows these steps: The onion is thinly sliced, boiled in salt water for about 10 minutes in a sauce pan, then allowed to cool. 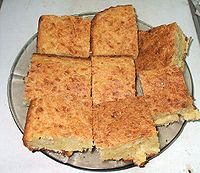 The pork fat is whipped and the eggs are added one by one, continuing the whipping. The crumbled cheese is then added.

The onions with the boiled water are added to the mixture, and the corn flour is slowly added, alternating with the milk and the cream. The combination is mixed until smooth then poured into a greased (with butter or oil) container to be baked in a hot oven (200 degrees Celsius) for about an hour.

The sopa paraguaya is an essential element in any "asado" (a social occasion where diverse cuts of grilled beef, pork and sausages are eaten, the Paraguayan version of the American barbecue), during the days of Semana Santa (Holy Week
Holy Week
Holy Week in Christianity is the last week of Lent and the week before Easter...
), especially at the viernes santos (Holy Fridays), and also at weddings. There's always a recurrent question that is made to the couples still unwed after many years: "¿Cuándo comemos la sopa?" (When will we eat the soup?)