Sonsorol is one of the sixteen states of Palau
Palau
Palau , officially the Republic of Palau , is an island nation in the Pacific Ocean, east of the Philippines and south of Tokyo. In 1978, after three decades as being part of the United Nations trusteeship, Palau chose independence instead of becoming part of the Federated States of Micronesia, a...
. The administrative center is Dongosaru
Dongosaru
Dongosaru is a village in Palau, and the capital of the state of Sonsorol. The population as of 2009 was about 30...
on Sonsorol island. The inhabitants speak Sonsorolese
Sonsorolese language
The Sonsorolese language is a Micronesian language spoken in Palau, originally on the islands composing the state of Sonsorol, but nowadays mostly by immigrants in the rest of the country...
, a local Trukic
Trukic languages
The Trukic languages are a dialect continuum of Micronesian languages, conventionally divided into a dozen languages.-Components:The database seems to say that Sonsorol is the most divergent of the Trukese languages. However, the results are defective and it is not clear that they support a Trukese...
language, and Palauan
Palauan language
Palauan is one of the two nationally recognized official languages spoken in the Republic of Palau...
.

The islands of the state of Sonsorol, together with the islands of Hatohobei
Hatohobei
Tobi Island, or Hatohobei , is the southernmost of Palau's sixteen states, consisting of Tobi Island and uninhabited Helen Reef. The total land area is about 0.88 km²...
, form the Southwest Islands
Southwest Islands (Palau)
The Southwest Islands of Palau are several small islands spread across the Pacific Ocean, about 600 km from the main island chain of Palau. The nearshore islands to the southwest of the main island of Palau , which belong to the states of Koror, Peleliu and Angaur and to the unincorporated Rock...
of Palau.

The state is subdivided into four municipalities
Municipality
A municipality is essentially an urban administrative division having corporate status and usually powers of self-government. It can also be used to mean the governing body of a municipality. A municipality is a general-purpose administrative subdivision, as opposed to a special-purpose district...
, which correspond to the four individual islands, with one village on each island, with the possible exception of Fanna Island. The islands are, from north to south (Fanna Island and Sonsorol Island are together called Sonsorol Islands): 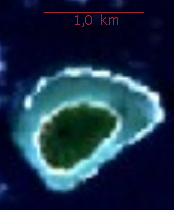 Fanna, also called Fana, is encircled by a coral reef extending 160 to 480 m offshore, and nearly circular in shape, with a diameter of 350 m. The island is thickly wooded with coconut palms and other trees. Although the island is referenced as a municipality
Municipality
A municipality is essentially an urban administrative division having corporate status and usually powers of self-government. It can also be used to mean the governing body of a municipality. A municipality is a general-purpose administrative subdivision, as opposed to a special-purpose district...
, with Mariano Carlos serving as chief since 2000, no buildings or village can be made out on detailed aerial photographs, and the island is noted as uninhabited by different sources. Fanna Island and nearby Sonsorol Island 1.6 km further south together form the Sonsorol Islands.

Sonsorol Island, also called Dongosaro or Dongosaru, is encircled by a coral reef extending 160 to 480 m offshore. It is 2 km long north south, and up to 890 m wide in the north. It is located 1.6 km south of Fanna Island. The village of Dongosaro, which is the capital of the state, is located on the west coast. The island is thickly wooded with coconut palms and other trees. Together with Fanna, it forms the Sonsorol Islands.

Pulo Anna or Puro is fringed by a coral reef extending beyond 460 m offshore. The island itself is about elliptical and measures 800 meters northeast-southwest, and is up to 550 meters wide. Puro village is on the northwest side of the island. Pulo Anna lies in the flow of the Equatorial Countercurrent throughout the year.

Merir Island, or Melieli, is fringed by reef which extends beyond 1100 m offshore in the south and 160 m in the north. The edges of the reef are steep-to, except at the northern end where a spit, with a depth of 12.8 meters at its outer end, extends about 1300 meters northward. The island itself is 2.200 meters north south, and up to 600 meters wide. The village of Melieli, which has a radio station, is located on the northwest side of the island.

Sonsorol is the setting for the individualist anarchist
Individualist anarchism
Individualist anarchism refers to several traditions of thought within the anarchist movement that emphasize the individual and his or her will over external determinants such as groups, society, traditions, and ideological systems. Individualist anarchism is not a single philosophy but refers to a...
piece "Visit Port Watson!", originally published in the book Semiotext(e) SF
Semiotext(e) SF
Semiotext SF is a science fiction anthology released in 1989 and edited by Rudy Rucker, Peter Lamborn Wilson and Robert Anton Wilson. It includes short stories and other works by the likes of J. G. Ballard, William S. Burroughs, Kerry Thornley, William Gibson, Bruce Sterling, and others.USA ISBN...
, edited by Rudy Rucker
Rudy Rucker
Rudolf von Bitter Rucker is an American mathematician, computer scientist, science fiction author, and philosopher, and is one of the founders of the cyberpunk literary movement. The author of both fiction and non-fiction, he is best known for the novels in the Ware Tetralogy, the first two of...
, Robert Anton Wilson
Robert Anton Wilson
Robert Anton Wilson , known to friends as "Bob", was an American author and polymath who became at various times a novelist, philosopher, psychologist, essayist, editor, playwright, poet, futurist, civil libertarian and self-described agnostic mystic...
, and Peter Lamborn Wilson
Peter Lamborn Wilson
Peter Lamborn Wilson , is an American political writer, essayist, and poet, known for first proposing the concept of the Temporary Autonomous Zone , based, in part, on a historical review of pirate utopias...
.

It is name for the merged group of two tribes ( Koror
Koror
Koror is the state comprising the main commercial centre of the Republic of Palau. It consists of several islands, the most prominent being Koror Island ....
and Airai
Airai
Airai, located on the southern coast of Babeldaob island, is the second-most populous state of Palau. It contains the country's chief airport, Airai International Airport, and is connected by the Koror-Babeldaob Bridge to nearby Koror Island....
) in the second interlude of Philippine version of the Survivor franchise
Survivor Philippines
The first season of Survivor Philippines premiered on September 15, 2008, and ended its run on December 12 of the same year. Auditions for this season were held in six Philippine cities in May 2008. From these auditions, 18 contestants were selected to participate on the show in June 2008...
, Survivor Philippines: Palau.