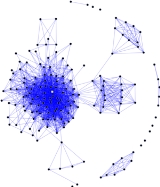 Overview
A social network is a social structure
Social structure
Social structure is a term used in the social sciences to refer to patterned social arrangements in society that are both emergent from and determinant of the actions of the individuals. The usage of the term "social structure" has changed over time and may reflect the various levels of analysis...
made up of individuals (or organizations) called "nodes", which are tied (connected) by one or more specific types of interdependency, such as friendship
Friendship
Friendship is a form of interpersonal relationship generally considered to be closer than association, although there is a range of degrees of intimacy in both friendships and associations. Friendship and association are often thought of as spanning across the same continuum...
, kinship
Kinship
Kinship is a relationship between any entities that share a genealogical origin, through either biological, cultural, or historical descent. And descent groups, lineages, etc. are treated in their own subsections....
, common interest, financial exchange, dislike, sexual relationships
Sexual network
A sexual network is a social network that is defined by the sexual relationships within a set of individuals.-Studies and discoveries:Like other forms of social networks, sexual networks can be formally studied using the mathematics of graph theory and network theory.Recent epidemiological studies ...
, or relationships of beliefs, knowledge or prestige.

HI, I am thinking of designing a social network analysis for a community based participatory research program. Altoghether, there will be 10 or...
More
x