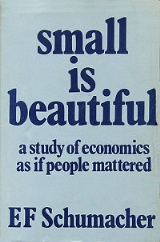 Encyclopedia
Small Is Beautiful: Economics As If People Mattered is a collection of essay
Essay
An essay is a piece of writing which is often written from an author's personal point of view. Essays can consist of a number of elements, including: literary criticism, political manifestos, learned arguments, observations of daily life, recollections, and reflections of the author. The definition...
s by British economist E. F. Schumacher
E. F. Schumacher
Ernst Friedrich "Fritz" Schumacher was an internationally influential economic thinker, statistician and economist in Britain, serving as Chief Economic Advisor to the UK National Coal Board for two decades. His ideas became popularized in much of the English-speaking world during the 1970s...
. The phrase "Small Is Beautiful" came from a phrase by his teacher Leopold Kohr
Leopold Kohr
Leopold Kohr was an economist, jurist and political scientist known both for his opposition to the "cult of bigness" in social organization and as one of those who inspired the small is beautiful movement...
. It is often used to champion small, appropriate technologies that are believed to empower people more, in contrast with phrases such as "bigger is better".

First published in 1973, Small Is Beautiful brought Schumacher's critiques of Western economics to a wider audience during the 1973 energy crisis and emergence of globalization
Globalization
Globalization refers to the increasingly global relationships of culture, people and economic activity. Most often, it refers to economics: the global distribution of the production of goods and services, through reduction of barriers to international trade such as tariffs, export fees, and import...
. The Times Literary Supplement
The Times Literary Supplement
The Times Literary Supplement is a weekly literary review published in London by News International, a subsidiary of News Corporation.-History:...
ranked Small Is Beautiful among the 100 most influential books published since World War II
World War II
World War II, or the Second World War , was a global conflict lasting from 1939 to 1945, involving most of the world's nations—including all of the great powers—eventually forming two opposing military alliances: the Allies and the Axis...
. A further edition with commentaries was published in 1999.

Schumacher was a respected economist who worked with John Maynard Keynes
John Maynard Keynes
John Maynard Keynes, Baron Keynes of Tilton, CB FBA , was a British economist whose ideas have profoundly affected the theory and practice of modern macroeconomics, as well as the economic policies of governments...
and John Kenneth Galbraith
John Kenneth Galbraith
John Kenneth "Ken" Galbraith , OC was a Canadian-American economist. He was a Keynesian and an institutionalist, a leading proponent of 20th-century American liberalism...
, and for twenty years as the Chief Economic Advisor to the National Coal Board
National Coal Board
The National Coal Board was the statutory corporation created to run the nationalised coal mining industry in the United Kingdom. Set up under the Coal Industry Nationalisation Act 1946, it took over the mines on "vesting day", 1 January 1947...
in the United Kingdom
United Kingdom
The United Kingdom of Great Britain and Northern IrelandIn the United Kingdom and Dependencies, other languages have been officially recognised as legitimate autochthonous languages under the European Charter for Regional or Minority Languages...
. He was opposed to the tenets of neo-classical economics, declaring that single-minded concentration on output
Output
Output is the term denoting either an exit or changes which exit a system and which activate/modify a process. It is an abstract concept, used in the modeling, system design and system exploitation.-In control theory:...
and technology
Technology
Technology is the making, usage, and knowledge of tools, machines, techniques, crafts, systems or methods of organization in order to solve a problem or perform a specific function. It can also refer to the collection of such tools, machinery, and procedures. The word technology comes ;...
was dehumanizing
Dehumanization
Dehumanization is to make somebody less human by taking away his or her individuality, the creative and interesting aspects of his or her personality, or his or her compassion and sensitivity towards others. Dehumanization may be directed by an organization or may be the composite of individual...
. He held that one's workplace should be dignified
Dignity
Dignity is a term used in moral, ethical, and political discussions to signify that a being has an innate right to respect and ethical treatment. It is an extension of the Enlightenment-era concepts of inherent, inalienable rights...
and meaningful first, efficient second, and that nature (like its natural resources) is priceless.

Schumacher proposed the idea of "smallness within bigness": a specific form of decentralization
Decentralization
__FORCETOC__Decentralization or decentralisation is the process of dispersing decision-making governance closer to the people and/or citizens. It includes the dispersal of administration or governance in sectors or areas like engineering, management science, political science, political economy,...
. For a large organization
Organization
An organization is a social group which distributes tasks for a collective goal. The word itself is derived from the Greek word organon, itself derived from the better-known word ergon - as we know `organ` - and it means a compartment for a particular job.There are a variety of legal types of...
to work, according to Schumacher, it must behave like a related group of small organizations. Schumacher's work coincided with the growth of ecological
Ecology
Ecology is the scientific study of the relations that living organisms have with respect to each other and their natural environment. Variables of interest to ecologists include the composition, distribution, amount , number, and changing states of organisms within and among ecosystems...
concerns and with the birth of environmentalism
Environmentalism
Environmentalism is a broad philosophy, ideology and social movement regarding concerns for environmental conservation and improvement of the health of the environment, particularly as the measure for this health seeks to incorporate the concerns of non-human elements...
and he became a hero to many in the environmental movement
Environmental movement
The environmental movement, a term that includes the conservation and green politics, is a diverse scientific, social, and political movement for addressing environmental issues....
.

The book is divided into four parts: "The Modern World," "Resources," "The Third World," and "Organization and Ownership."

In the first chapter, "The Problem of Production", Schumacher argues that the modern economy
Economy
An economy consists of the economic system of a country or other area; the labor, capital and land resources; and the manufacturing, trade, distribution, and consumption of goods and services of that area...
is unsustainable. Natural resources
Natural Resources
Natural Resources is a soul album released by Motown girl group Martha Reeves and the Vandellas in 1970 on the Gordy label. The album is significant for the Vietnam War ballad "I Should Be Proud" and the slow jam, "Love Guess Who"...
(like fossil fuel
Fossil fuel
Fossil fuels are fuels formed by natural processes such as anaerobic decomposition of buried dead organisms. The age of the organisms and their resulting fossil fuels is typically millions of years, and sometimes exceeds 650 million years...
s), are treated as expendable income
Income
Income is the consumption and savings opportunity gained by an entity within a specified time frame, which is generally expressed in monetary terms. However, for households and individuals, "income is the sum of all the wages, salaries, profits, interests payments, rents and other forms of earnings...
, when in fact they should be treated as capital
Capital (economics)
In economics, capital, capital goods, or real capital refers to already-produced durable goods used in production of goods or services. The capital goods are not significantly consumed, though they may depreciate in the production process...
, since they are not renewable, and thus subject to eventual depletion. He further argues that nature's resistance to pollution
Pollution
Pollution is the introduction of contaminants into a natural environment that causes instability, disorder, harm or discomfort to the ecosystem i.e. physical systems or living organisms. Pollution can take the form of chemical substances or energy, such as noise, heat or light...
is limited as well. He concludes that government effort must be concentrated on sustainable development
Sustainable development
Sustainable development is a pattern of resource use, that aims to meet human needs while preserving the environment so that these needs can be met not only in the present, but also for generations to come...
, because relatively minor improvements, for example, technology transfer
Technology transfer
Technology Transfer, also called Transfer of Technology and Technology Commercialisation, is the process of skill transferring, knowledge, technologies, methods of manufacturing, samples of manufacturing and facilities among governments or universities and other institutions to ensure that...
to Third World
Third World
The term Third World arose during the Cold War to define countries that remained non-aligned with either capitalism and NATO , or communism and the Soviet Union...
countries, will not solve the underlying problem of an unsustainable economy.

Schumacher's philosophy is one of "enoughness," appreciating both human needs, limitations and appropriate use of technology
Appropriate technology
Appropriate technology is an ideological movement originally articulated as "intermediate technology" by the economist Dr...
. It grew out of his study of village-based economics, which he later termed "Buddhist economics
Buddhist economics
Buddhist Economics is a spiritual approach to Economics. It examines the psychology of the human mind and the anxiety,aspirations and emotions that direct economic activity. Its understanding aims to clear the confusion between what is truly harmful and beneficial in Economics and ultimately tries...
," which is the subject of the book's fourth chapter.

He faults conventional economic thinking for failing to consider the most appropriate scale for an activity, blasts notions that "growth is good," and that "bigger is better," and questions the appropriateness of using mass production in developing countries, promoting instead "production by the masses." Schumacher was one of the first economists to question the appropriateness of using gross national product to measure human well being, emphasizing that "the aim ought to be to obtain the maximum amount of well being with the minimum amount of consumption."