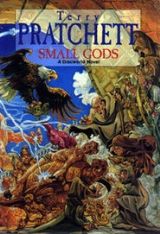 Encyclopedia
Small Gods is the thirteenth of Terry Pratchett
Terry Pratchett
Sir Terence David John "Terry" Pratchett, OBE is an English novelist, known for his frequently comical work in the fantasy genre. He is best known for his popular and long-running Discworld series of comic fantasy novels...
's Discworld
Discworld
Discworld is a comic fantasy book series by English author Sir Terry Pratchett, set on the Discworld, a flat world balanced on the backs of four elephants which, in turn, stand on the back of a giant turtle, Great A'Tuin. The books frequently parody, or at least take inspiration from, J. R. R....
novels, published in 1992. It tells the origin of the god Om, and his relations with his prophet, the reformer Brutha. In the process, it satirises
Satire
Satire is primarily a literary genre or form, although in practice it can also be found in the graphic and performing arts. In satire, vices, follies, abuses, and shortcomings are held up to ridicule, ideally with the intent of shaming individuals, and society itself, into improvement...
religious institution
Institution
An institution is any structure or mechanism of social order and cooperation governing the behavior of a set of individuals within a given human community...
s, people, and practices, and the role of religion in political
Politics
Politics is a process by which groups of people make collective decisions. The term is generally applied to the art or science of running governmental or state affairs, including behavior within civil governments, but also applies to institutions, fields, and special interest groups such as the...
life.

The audio codec Ogg Vorbis is named after the character Exquisitor Vorbis in Small Gods.

The Great God Om tries to manifest himself once more in the world, as the time of his eighth prophet is nigh.
He is surprised, however, when he finds himself in the body of a tortoise, stripped of his divine powers.

In the gardens of Omnia's capital he addresses the novice Brutha, the only one able to hear his voice. Om has a hard time convincing the boy of his godliness, as Brutha is convinced that Om can do anything he wants, and would not want to appear as a tortoise.

Brutha is gifted with an eidetic memory
Eidetic memory
Eidetic , commonly referred to as photographic memory, is a medical term, popularly defined as the ability to recall images, sounds, or objects in memory with extreme precision and in abundant volume. The word eidetic, referring to extraordinarily detailed and vivid recall not limited to, but...
and is therefore chosen by Vorbis, the head of the Quisition
Inquisition
The Inquisition, Inquisitio Haereticae Pravitatis , was the "fight against heretics" by several institutions within the justice-system of the Roman Catholic Church. It started in the 12th century, with the introduction of torture in the persecution of heresy...
, to come along on a diplomatic mission to Ephebe. However, Brutha is also considered unintelligent, since he never learned to read, and rarely thinks for himself.

With the help of Ephebe's Great Library, and the philosophers Didactylos, his nephew, Urn, and Abraxas, Om learns that Brutha is the only one left who believes in him. All others either just fear the Quisition's wrath or go along with the church out of habit. While in Ephebe, Brutha's memory aids an Omnian raid through the Labyrinth
Labyrinth
In Greek mythology, the Labyrinth was an elaborate structure designed and built by the legendary artificer Daedalus for King Minos of Crete at Knossos...
guarding the Tyrant's palace. While in the library of Ephebe, Brutha also memorizes many scrolls in order to protect Ephebeian knowledge as Omnian soldiers set fire to the building.

Fleeing the ensuing struggle by boat, Brutha, Om and a severely injured Vorbis end up lost in the desert. Trekking home to Omnia, they encounter ruined temples as well as the small gods
Small Gods
Small Gods is the thirteenth of Terry Pratchett's Discworld novels, published in 1992. It tells the origin of the god Om, and his relations with his prophet, the reformer Brutha...
who are faint ghost-like beings yearning to be believed in to become powerful. Realizing his 'mortality' and how important his believers are to him, Om begins to care about them for the first time.

While Brutha, Vorbis, and Om are in the desert, the Tyrant of Ephebe manages to regain control of the city and contacts other nations who have been troubled by Omnia's imperialistic interactions with the other countries around it.

On the desert's edge, a recovered Vorbis attempts to finish off Om's tortoise form, abducts Brutha, and proceeds to become ordained as the Eighth Prophet. Brutha is to be publicly burned for heresy while strapped on a heatable bronze turtle when Om comes to the rescue, dropping from an eagle's claws onto Vorbis' head. As a great crowd witnesses this miracle they come to believe in Om and he becomes powerful again.

Om manifests himself within the citadel and attempts to grant Brutha the honour of establishing the Church's new doctrines. However, Brutha does not agree with Om's new rule and explains that the Church should care for people while having a tolerance for other religious practices.

Meanwhile, Ephebe has gained the support of several other nations and has sent an army against Omnia, establishing a beachhead near the citadel. Brutha attempts to establish diplomatic contact with the generals of the opposing army. Despite trusting Brutha, the leaders state they do not trust Omnia and that bloodshed is necessary. At the same time, Simony leads the Omnian military to the beachhead and uses Urn's machine of war in order to fight the Ephebians.

While the fighting occurs on the beachhead, Om attempts to physically intervene, but Brutha demands he does not interfere with the actions of humans. Om becomes infuriated but obeys Brutha, but he travels to an area of the Discworld where gods gamble on the lives of humans in order to gain or lose belief. While there, Om manages to unleash his fury, even striking the other gods. This causes the soldiers to cease fighting on the battlefield, thinking it a sign from the heavens.

In the book's conclusion Brutha becomes the Eighth Prophet, ending the Quisition and reforming the church to be more open-minded and humanist. Om also agrees to forsake the smiting of Omnian citizens for at least a hundred years. The last moments of the book see Brutha's death a hundred years to the day after Om's return to power and his journey across the ethereal desert towards judgement, accompanied by the spirit of Vorbis, whom Brutha found still in the desert and took pity on. It is also revealed that this century of peace was originally meant to be a century of war and bloodshed which the History Monk Lu-Tze changed to something he liked better.

In 2006 the book was adapted as a serial for BBC Radio 4
BBC Radio 4
BBC Radio 4 is a British domestic radio station, operated and owned by the BBC, that broadcasts a wide variety of spoken-word programmes, including news, drama, comedy, science and history. It replaced the BBC Home Service in 1967. The station controller is currently Gwyneth Williams, and the...
. It starred Patrick Barlow
Patrick Barlow
Patrick Barlow is an English actor, comedian and playwright. His comedic alter ego, Desmond Olivier Dingle, is the founder, Artistic Director and Chief Executive of the two-man National Theatre of Brent, which has performed on stage, on television and on radio.-Radio:Barlow is the scriptwriter, as...
as Om, Carl Prekopp
Carl Prekopp
Carl Prekopp is a British actor. He played Richard III at the Riverside Studios and originated the part of Lawrence in Tim Firth's stage adaptation of Calendar Girls. He has appeared in BBC Radio 4 adaptations of Terry Pratchett's Mort , Small Gods and Night Watch...
as Brutha, and Alex Jennings
Alex Jennings
Alex Jennings is an English actor whose roles have included Charles, Prince of Wales in The Queen .-Early years:...
as Vorbis. Anton Lesser
Anton Lesser
Anton Lesser is a British actor. He attended Moseley Grammar School and the University of Liverpool before going to RADA in 1977 where he was awarded the Bancroft Gold Medal as the most promising actor of his year....
was the narrator.
A stage version of Small Gods was adapted in 2010 and performed between 17th and 19th February 2011 at The Assembly Rooms Theatre, Durham by OOOOK! Productions and members of Durham Student Theatre. All profits were donated to The Orangutan Foundation. The adaptation was written by Ben Saunders, a graduate of the University of Durham department of Archaeology.