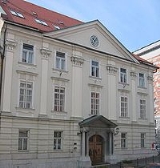 Encyclopedia
The Slovenian Academy of Sciences and Arts is the national academy
National academy
A national academy is an organizational body, usually operating with state financial support and approval, that co-ordinates scholarly research activities and standards for academic disciplines, most frequently in the sciences but also the humanities. Typically the country's learned societies in...
of Slovenia
Slovenia
Slovenia , officially the Republic of Slovenia , is a country in Central and Southeastern Europe touching the Alps and bordering the Mediterranean. Slovenia borders Italy to the west, Croatia to the south and east, Hungary to the northeast, and Austria to the north, and also has a small portion of...
, which encompasses science
Science
Science is a systematic enterprise that builds and organizes knowledge in the form of testable explanations and predictions about the universe...
and the arts
The arts
The arts are a vast subdivision of culture, composed of many creative endeavors and disciplines. It is a broader term than "art", which as a description of a field usually means only the visual arts. The arts encompass visual arts, literary arts and the performing arts – music, theatre, dance and...
and brings together the top Slovene researcher
Researcher
A researcher is somebody who performs research, the search for knowledge or in general any systematic investigation to establish facts. Researchers can work in academic, industrial, government, or private institutions.-Examples of research institutions:...
s and artist
Artist
An artist is a person engaged in one or more of any of a broad spectrum of activities related to creating art, practicing the arts and/or demonstrating an art. The common usage in both everyday speech and academic discourse is a practitioner in the visual arts only...
s as members of the academy
Academy
An academy is an institution of higher learning, research, or honorary membership.The name traces back to Plato's school of philosophy, founded approximately 385 BC at Akademia, a sanctuary of Athena, the goddess of wisdom and skill, north of Athens, Greece. In the western world academia is the...
.

The President (currently neurologist
Neurologist
A neurologist is a physician who specializes in neurology, and is trained to investigate, or diagnose and treat neurological disorders.Neurology is the medical specialty related to the human nervous system. The nervous system encompasses the brain, spinal cord, and peripheral nerves. A specialist...
Jože Trontelj), the two Vice-Presidents, the Secretary General and the Secretaries of its various Sections are elected for a period of three years with the possibility of one further re-election. SAZU can have a maximum of 60 full and 30 associate members; at present it has 74 full and 19 associate members. It can also have a maximum of 90 corresponding members from scientific institutions abroad; at present it has 85 such members.

SAZU has founded 17 important research institutes from the fields of the humanities and natural sciences, each of which functions an autonomous research organisation, yet falls under the overall management of the Academy's Scientific Research Centre (ZRC SAZU).

SAZU also has several special units, including the Department for International Relations and Scientific Co-ordination is headed by a full member of SAZU and the Slovene Academy of Sciences and Arts (SAZU) Library, the third largest library in Slovenia, which regularly exchanges publications with scientific institutions all over the world.