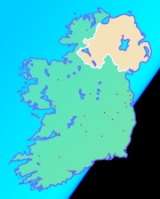 Encyclopedia
Sligo Airport is located in Strandhill
Strandhill
Strandhill or Larass is a village and townland in County Sligo, Ireland.-Location:Strandhill is situated at the western base of Knocknarea on the Cúil Irra peninsula, and is Atlantic facing. Although the main part of the village lies within the townland of Larass/Strandhill, it also extends into...
, County Sligo, 5 NM west of Sligo
Sligo
Sligo is the county town of County Sligo in Ireland. The town is a borough and has a charter and a town mayor. It is sometimes referred to as a city, and sometimes as a town, and is the second largest urban area in Connacht...
in Ireland
Republic of Ireland
Ireland , described as the Republic of Ireland , is a sovereign state in Europe occupying approximately five-sixths of the island of the same name. Its capital is Dublin. Ireland, which had a population of 4.58 million in 2011, is a constitutional republic governed as a parliamentary democracy,...
. The airport is a small regional airport
Airport
An airport is a location where aircraft such as fixed-wing aircraft, helicopters, and blimps take off and land. Aircraft may be stored or maintained at an airport...
and has no scheduled routes.

It is the home of the Sligo Aero Club (a Registered Training Facility) and the northwest base for the Irish Coastguard. Helicopters fly from here to respond to distress calls and the area is commonly used by the Irish Coast Guard
Irish Coast Guard
The Irish Coast Guard is part of the Department of Transport. The Irish Search and Rescue Region, which includes most of the Republic of Ireland and parts of Northern Ireland is the area over which the coast guard has authority. This area is bounded by the UK Search and Rescue Region...
for training. Private flight training, skydiving and charity jumps are all operated from the airport.

A current safety concern surrounds the fact that the runway is currently several feet underwater in Sligo Bay. In addition, the peninsula upon which the airport is situated is less than 2 km (1.2 mi) long. In 2003, a Euroceltic Airways
Euroceltic Airways
-History:Euroceltic Airways was a short haul airline, founded in 1999 by Diran Kazandjian and taken over by businessman Noel Hanley, the CEO of Global Ocean Technologies Ltd in 2002. It was given its Air Operator's Certificate on 12 February 2001....
Fokker F27
Fokker F27
The Fokker F27 Friendship is a turboprop airliner designed and built by the Dutch aircraft manufacturer Fokker.-Design and development:Design of the Fokker F27 started in the 1950s as a replacement to the successful Douglas DC-3 airliner...
aircraft carrying the band Aslan
Aslan (rock band)
Aslan are an Irish rock band from Dublin who formed in 1982. Comprising Christy Dignam, Joe Jewell, Billy McGuinness, Alan Downey and Rodney O'Brien, the band has released five studio albums - Feel No Shame , Goodbye Charlie Moonhead , Here Comes Lucy Jones , Waiting For This Madness To End and...
overshot the runway and the nose dipped into the sea. The accident caused no casualties.

Euroceltic were operating the Government of Ireland public service obligation
Public Service Obligation
In transport, public service obligation or PSO is an arrangement in which a governing body or other authority offers an auction for subsidies, permit the winning company a monopoly to operate a specified service of public transport for a specified period of time for the given subsidy...
subsidy scheme for the route to Dublin at the time. The airline collapsed shortly afterwards and Aer Arann
Aer Arann
Aer Arann is a regional airline based in Dublin, Ireland. Aer Arann operates scheduled services from Ireland and the Isle of Man to destinations in Ireland, the United Kingdom, and France, with a fleet of 18 aircraft. Aer Arann has expanded from a single aircraft to Ireland's third largest airline...
operated the route for the remainder of the contract. The 2005 contract tender was offered to Loganair
Loganair
Loganair is a Scottish airline with its registered office on the grounds of Glasgow International Airport and in Paisley, Renfrewshire, Scotland. Loganair operates scheduled services under a Flybe franchise in mainland Scotland and to Orkney, Shetland and the Western Isles. In addition it operates...
who declined it. Aer Arann subsequently negotiated the operation of the contract with the Government.

On 21 February 2007, The Irish Government announced that it would be giving €8.5 million to the airport in capital grant money to upgrade the runway and add approach lighting and safety enhancements. However the proposed runway extension would have required infill and the erection of gantries across part of the adjacent protected beach. The plan drew much local criticism and almost 400 objections from local area residents, fisheries groups, Dept of Environment, An Taisce and Birdwatch Ireland. The planning permission was quashed on the third attempt by a high court judge on justification grounds.

Until the end of 2008 there was a connection with Manchester
Manchester
Manchester is a city and metropolitan borough in Greater Manchester, England. According to the Office for National Statistics, the 2010 mid-year population estimate for Manchester was 498,800. Manchester lies within one of the UK's largest metropolitan areas, the metropolitan county of Greater...
which was operated by Aer Arann. In a further blow to the airport the airport lost its only scheduled route to/from Dublin after the Irish Government withdrew funding for regional routes including Sligo, the route ended July 21st 2011.

The Irish Government commissioned Value for Money Review of Exchequer Funding on the Regional Airports Programme recommended the ending of operational subvention to the airport and the ending of the PSO designation citing poor performance, growing operational costs and development of alternative transport connections to the region.