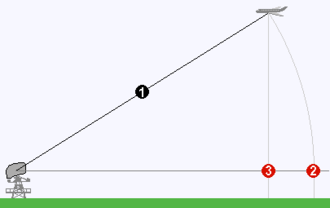 In radio electronics especially radar
Radar
Radar is an object-detection system which uses radio waves to determine the range, altitude, direction, or speed of objects. It can be used to detect aircraft, ships, spacecraft, guided missiles, motor vehicles, weather formations, and terrain. The radar dish or antenna transmits pulses of radio...
terminology, slant range is the line-of-sight distance between two points which are not at the same level relative to a specific datum.

An example of slant range is the distance to an aircraft flying at high altitude with respect to that of the radar antenna. The slant range (1) is the hypotenuse of the triangle represented by the altitude of the aircraft and the distance between the radar antenna and the aircraft's ground track
Course (navigation)
In navigation, a vehicle's course is the angle that the intended path of the vehicle makes with a fixed reference object . Typically course is measured in degrees from 0° clockwise to 360° in compass convention . Course is customarily expressed in three digits, using preliminary zeros if needed,...
(point (3) on the earth directly below the aircraft). In the absence of altitude information, for example from a height finder
Height finder
A height finder is a ground based aircraft altitude measuring device.Early height finder implementations were optical devices and later migrated to radar devices. Devices combining both optics and radar were deployed by the U.S...
, the aircraft location would be plotted farther (2) from the antenna than its actual ground track.
The source of this article is wikipedia, the free encyclopedia.  The text of this article is licensed under the GFDL.