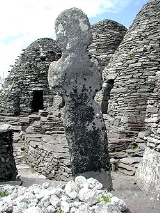 Encyclopedia
Skellig Michael also known as Great Skellig, is a steep rocky island in the Atlantic Ocean
Atlantic Ocean
The Atlantic Ocean is the second-largest of the world's oceanic divisions. With a total area of about , it covers approximately 20% of the Earth's surface and about 26% of its water surface area...
about 9 miles (14.5 kilometres) from the coast of County Kerry
County Kerry
Kerry means the "people of Ciar" which was the name of the pre-Gaelic tribe who lived in part of the present county. The legendary founder of the tribe was Ciar, son of Fergus mac Róich. In Old Irish "Ciar" meant black or dark brown, and the word continues in use in modern Irish as an adjective...
, Ireland
Ireland
Ireland is an island to the northwest of continental Europe. It is the third-largest island in Europe and the twentieth-largest island on Earth...
. It is the larger of the two Skellig Islands
Skellig Islands
The Skellig Islands , once known as the Skellocks, are two small, steep, and rocky islands lying about 13 km west of Bolus Head on the Iveragh Peninsula in County Kerry, Ireland...
. After probably being founded in the 7th century, for 600 years the island was a centre of monastic life for Irish Christian
Christian
A Christian is a person who adheres to Christianity, an Abrahamic, monotheistic religion based on the life and teachings of Jesus of Nazareth as recorded in the Canonical gospels and the letters of the New Testament...
monks. The Gaelic
Gaels
The Gaels or Goidels are speakers of one of the Goidelic Celtic languages: Irish, Scottish Gaelic, and Manx. Goidelic speech originated in Ireland and subsequently spread to western and northern Scotland and the Isle of Man....
monastery
Monastery
Monastery denotes the building, or complex of buildings, that houses a room reserved for prayer as well as the domestic quarters and workplace of monastics, whether monks or nuns, and whether living in community or alone .Monasteries may vary greatly in size – a small dwelling accommodating only...
, which is situated almost at the summit of the 230-metre-high rock became a UNESCO
UNESCO
The United Nations Educational, Scientific and Cultural Organization is a specialized agency of the United Nations...
World Heritage Site
World Heritage Site
A UNESCO World Heritage Site is a place that is listed by the UNESCO as of special cultural or physical significance...
in 1996. It is one of Europe's better known but least accessible monasteries.

Since the extreme remoteness of Skellig Michael has until recently discouraged visitors, the site is exceptionally well preserved. The very spartan conditions inside the monastery illustrate the ascetic lifestyle practiced by early Irish Christians. The monks lived in stone 'beehive' huts (clochan
Clochan
A Clochán is a dry-stone hut with a corbelled roof, dating from the early Middle Ages or earlier. Most archaeologists think these structures were built on the southwestern coast of Ireland since the Bronze Age. They are most commonly round beehive huts, but rectangular plans are known as well....
s), perched above nearly vertical cliff walls.

Landmarks include The Needle's Eye, The Spit, Christ's Valley and The Hermitage.

In Irish Celtic mythology Skellig Michael is said to be the burial grounds of Ir, one of the sons of Miled who perished at the hands of the Tuatha De Danaan during the 'Coming of the Gael'. Ir's son, Eimhir, would inherit the province of Ulster after the battle of Tailltin. Notable Irish heroes such as Fergus, son of Rogh (The high king of Ulster prior to Conchubar MacNessa and teacher of Cuchulain) and Conall Cearnach of the Red Branch belonged to the line of Ir.http://www.sacred-texts.com/neu/celt/gafm/gafm09.htm 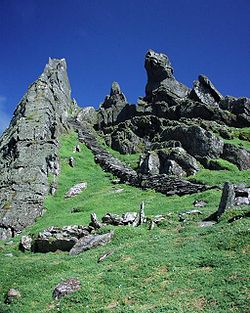 Along with its smaller neighbor, Little Skellig
Little Skellig
Little Skellig is the smaller of the two Skellig Islands, situated some 14 km off the coast of County Kerry, Ireland. Like its larger neighbour Skellig Michael, it is steep, rocky and uninhabited by humans. It rises to 134 metres above sea level, and is best known as the site of Ireland's...
, Great Skellig is an important nature reserve
Nature reserve
A nature reserve is a protected area of importance for wildlife, flora, fauna or features of geological or other special interest, which is reserved and managed for conservation and to provide special opportunities for study or research...
. Between them the Skelligs hold nationally important populations of a number of seabird
Seabird
Seabirds are birds that have adapted to life within the marine environment. While seabirds vary greatly in lifestyle, behaviour and physiology, they often exhibit striking convergent evolution, as the same environmental problems and feeding niches have resulted in similar adaptations...
s, including Gannet
Northern Gannet
The Northern Gannet is a seabird and is the largest member of the gannet family, Sulidae.- Description :Young birds are dark brown in their first year, and gradually acquire more white in subsequent seasons until they reach maturity after five years.Adults are long, weigh and have a wingspan...
, Fulmar
Fulmar
Fulmars are seabirds of the family Procellariidae. The family consists of two extant species and two that are extinct.-Taxonomy:As members of Procellaridae and then the order Procellariiformes, they share certain traits. First, they have nasal passages that attach to the upper bill called...
, Kittiwake
Black-legged Kittiwake
The Black-legged Kittiwake is a seabird species in the gull family Laridae.This species was first described by Linnaeus in his Systema naturae in 1758 as Larus tridactylus....
, Razorbill
Razorbill
The Razorbill is colonial seabird that will only come to land in order to breed. It is the largest living member of the Auk family. This agile bird will choose only one partner for life and females will lay one egg per year. Razorbills will nest along coastal cliffs in enclosed or slightly exposed...
, Common Guillemot
Common Guillemot
The Common Murre or Common Guillemot is a large auk. It is also known as the Thin-billed Murre in North America. It has a circumpolar distribution, occurring in low-Arctic and boreal waters in the North-Atlantic and North Pacific...
and Atlantic Puffin
Atlantic Puffin
The Atlantic Puffin is a seabird species in the auk family. It is a pelagic bird that feeds primarily by diving for fish, but also eats other sea creatures, such as squid and crustaceans. Its most obvious characteristic during the breeding season is its brightly coloured bill...
. Storm Petrels
European Storm-petrel
The European Storm Petrel or Storm Petrel is a small bird of the storm-petrel family, Hydrobatidae, part of the seabird order Procellariiformes. It is the only member of the genus Hydrobates.-Description:...
and Manx Shearwater
Manx Shearwater
The Manx Shearwater is a medium-sized shearwater in the seabird family Procellariidae. The scientific name of this species records a name shift: Manx Shearwaters were called Manks Puffins in the 17th century. Puffin is an Anglo-Norman word for the cured carcasses of nestling shearwaters...
s also nest in large numbers.

Each year 13 boat licenses are granted to tour operators who each run a single trip to Skellig Michael each day during the summer season (April to October, inclusive), weather permitting. For safety reasons, because the steps up to the monastery are rock, steep, and old, climbs are not permitted during very wet or windy weather.There are also dive sites immediately around the rock.