Encyclopedia
Skein is a fictional character
Fictional character
A character is the representation of a person in a narrative work of art . Derived from the ancient Greek word kharaktêr , the earliest use in English, in this sense, dates from the Restoration, although it became widely used after its appearance in Tom Jones in 1749. From this, the sense of...
, a mutant
Mutant (Marvel Comics)
In comic books published by Marvel Comics, a mutant is an organism who possesses a genetic trait called an X-gene that allows the mutant to naturally develop superhuman powers and abilities...
supervillain
Supervillain
A supervillain or supervillainess is a variant of the villain character type, commonly found in comic books, action movies and science fiction in various media.They are sometimes used as foils to superheroes and other fictional heroes...
in the Marvel Comics
Marvel Comics
Marvel Worldwide, Inc., commonly referred to as Marvel Comics and formerly Marvel Publishing, Inc. and Marvel Comics Group, is an American company that publishes comic books and related media...
universe
Marvel Universe
The Marvel Universe is the shared fictional universe where most comic book titles and other media published by Marvel Entertainment take place, including those featuring Marvel's most familiar characters, such as Spider-Man, the Hulk, the X-Men, and the Avengers.The Marvel Universe is further...
.

Sybil Dvorak was born in Focşani
Focsani
Focşani is the capital city of Vrancea County in Romania on the shores the Milcov river, in the historical region of Moldavia. It has a population of 101,854.-Geography:...
, Romania
Romania
Romania is a country located at the crossroads of Central and Southeastern Europe, on the Lower Danube, within and outside the Carpathian arch, bordering on the Black Sea...
in the shadow of the Balkans
Balkans
The Balkans is a geopolitical and cultural region of southeastern Europe...
. She was raised by Gypsies and spent much of her time alone nurturing her gardens and focusing on her mutant
Mutant (Marvel Comics)
In comic books published by Marvel Comics, a mutant is an organism who possesses a genetic trait called an X-gene that allows the mutant to naturally develop superhuman powers and abilities...
powers - the ability to telekinetically manipulate and control materials with her mind. She loved how the sensation of fiber
Fiber
Fiber is a class of materials that are continuous filaments or are in discrete elongated pieces, similar to lengths of thread.They are very important in the biology of both plants and animals, for holding tissues together....
, such as soft weaves and flowers, felt to her mental touch; hard objects felt abrasive to her. According to the comics, she was very lonely, so she wove herself gossamer
Gossamer
Gossamer commonly refers to:* Gossamer , very fine spider silk used for ballooning or kiting by various species of spiders* Gossamer , very light, sheer, gauze-like fabricGossamer may also refer to:- Technology :...
wings as delicate as her personality.

She then met an American actor named Jason Reed. Reed was starring in a remake of the movie Dracula
Dracula
Dracula is an 1897 novel by Irish author Bram Stoker.Famous for introducing the character of the vampire Count Dracula, the novel tells the story of Dracula's attempt to relocate from Transylvania to England, and the battle between Dracula and a small group of men and women led by Professor...
, which was being filmed on location in Romania. He romanced her and seduced her with promises of fame when flying her to his home in California
California
California is a state located on the West Coast of the United States. It is by far the most populous U.S. state, and the third-largest by land area...
. The two characters, Sybil Dvorak and Jason Reed, married, but Reed was constantly away from the house. Sybil then began imagining that he was having affairs behind her back. She wove herself a costume and began calling herself Gypsy Moth. She wreaked havoc attacking social gatherings in search of Reed.

Jessica Drew (Spider-Woman)
Spider-Woman (Jessica Drew)
Spider-Woman is a fictional character, a superheroine in the Marvel Comics Universe. The character first appeared in Marvel Spotlight #32 , and 50 issues of an ongoing series titled Spider-Woman followed...
encountered Gypsy Moth at a party she was attending. Accompanying Jessica Drew to the party was her boyfriend, S.H.I.E.L.D.
S.H.I.E.L.D.
S.H.I.E.L.D. is a fictional espionage and a secret military law-enforcement agency in the Marvel Comics Universe. Created by Stan Lee and Jack Kirby in Strange Tales #135 , it often deals with superhuman threats....
Agent Jerry Hunt, along with her mentor Magnus. Jessica Drew changed into her Spider-Woman costume and tried to confront Gypsy Moth, but Gypsy Moth unwove Drew's costume and then bound Jessica Drew in thread and tried to drown her in a swimming pool. Drew broke free, and at the same time her boyfriend, S.H.I.E.L.D. agent Hunt realized that the fight was occurring. The S.H.I.E.L.D. agent Hunt fired his gun at Gypsy Moth, damaging her wing so that she could not fly. Jessica Drew knocked out Hunt to keep him from getting in the way as she confronted Gypsy Moth. However, instead of turning her over to the authorities, Spider-Woman allowed her to walk away since they seemed to have some things in common.

Soon after her first encounter with Spider-Woman, Sybil managed to get her American citizenship and an inclusion into her husband Jason Reed’s will. When he died of a supposed obstructed blood vessel in his heart, she inherited his home and his wealth. She used these new assets to start a hedonistic cult
Cult
The word cult in current popular usage usually refers to a group whose beliefs or practices are considered abnormal or bizarre. The word originally denoted a system of ritual practices...
of drugs and decadence
Decadence
Decadence can refer to a personal trait, or to the state of a society . Used to describe a person's lifestyle. Concise Oxford Dictionary: "a luxurious self-indulgence"...
that worshipped her as a queen. 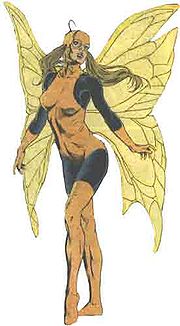 Soon after, Gypsy Moth was kidnapped by Tick-Tock
Tick-Tock
Tick-Tock is a fictional character, a mutant in the Marvel Comics Universe.-Publication history:Tick-Tock's first appearance was in Spider-Woman #50 , and he was created by Ann Nocenti and Brian Postman....
and Locksmith
Locksmith (comics)
Locksmith is a fictional character in the Marvel Universe.-Publication history:The Locksmith appeared in Spider-Woman #50 , and was created by Ann Nocenti and Brian Postman.-Fictional character biography:...
who used technological means to nullify her powers. Spider-Woman was also captured by Tick-Tock and Locksmith. Spider-Woman had fellow prisoner Tigra
Tigra
Tigra is a fictional American comic book superheroine in the Marvel Comics universe. Introduced as the non-superpowered crime fighter The Cat in Claws of the Cat #1 , she was co-created by writer-editor Roy Thomas, writer Linda Fite, and penciller Marie Severin...
insult prisoner Poltergeist enough to start a fight, in which they shorted out their specially designed prisons. Spider-Woman then had Gypsy Moth use her powers to swap their costumes. Once placed in Gypsy Moth’s specific prison, Spider-Woman broke free and released everyone else. After everyone was free, Gypsy Moth entangled Locksmith and Tick-Tock in their own clothing, and left them out in the open for the police to find. 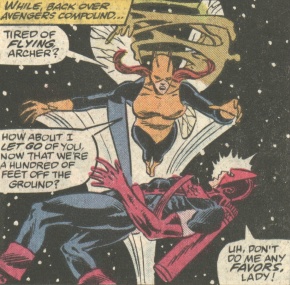 Gypsy Moth later left the Night Shift, and joined the Crimson Cowl
Crimson Cowl
Crimson Cowl is an identity which has been used by four Marvel Comics characters to varying degrees:*Ultron used the identity in his debut as Ultron-5 to conceal his sentience, while using:**Edwin Jarvis as a "frontman" under the identity....
's Masters of Evil
Masters of Evil
The Masters of Evil is a name for a number of fictional supervillain teams that appear in comic books published by Marvel Comics. The first version of the team appeared in The Avengers #6 , with the lineup continually changing over the years....
. Gypsy Moth aided the other Masters of Evil in their search for Justin Hammer
Justin Hammer
Justin Hammer is a fictional character that has appeared in various comic book series published by Marvel Comics. As a frequent adversary of the superhero Iron Man, Justin Hammer exists in Marvel's main shared universe, known as the Marvel Universe...
's legacy, by helping them battle Plantman
Plantman
Plantman aka Blackheath is a fictional character, a supervillain in the Marvel Comics universe. The character first appeared in Strange Tales vol. 1 #113.-Fictional character biography:...
, Hawkeye
Hawkeye (comics)
Hawkeye , also known as Goliath and Ronin, is a fictional character that appears in the comic books published by Marvel Comics. The character first appeared in Tales of Suspense #57 and was created by writer Stan Lee and artist Don Heck. Hawkeye joined the Avengers in Avengers Vol. 1 #16 Hawkeye...
and Songbird
Songbird (comics)
Songbird , formerly known as Screaming Mimi, is a fictional character, a superheroine and former supervillainess in the Marvel Comics Universe.-Publication history:...
. Justin Hammer's Legacy was a bio-toxin which could kill thousands of superhumans. Hawkeye attempted to convince Gypsy Moth and most of her teammates to switch sides, and to aide him in preventing the Crimson Cowl from obtaining the toxin. Gypsy Moth sided with Hawkeye "for kicks", designed a new costume for herself and changed her name to Skein.

Sybil (Skein), as a part of Hawkeye's team of Thunderbolts
Thunderbolts (comics)
The Thunderbolts are a Marvel Comics superhero team, which consists mostly of former supervillains. The group first appeared in The Incredible Hulk #449 , and was created by Kurt Busiek and Mark Bagley.-Publication history:...
, helped thwart the Crimson Cowl by effectively unraveling the Crimson Cowl's costume, rendering her powerless. As a member of the Thunderbolts, Sybil fought a S.H.I.E.L.D.
S.H.I.E.L.D.
S.H.I.E.L.D. is a fictional espionage and a secret military law-enforcement agency in the Marvel Comics Universe. Created by Stan Lee and Jack Kirby in Strange Tales #135 , it often deals with superhuman threats....
team and was present when the original team of Thunderbolts returned to Earth after having their own adventure on Counter-Earth.

Afterwards, the two Thunderbolts teams came together for a celebration. Members of the two teams contemplated whether to stay with or leave the group; Sybil announced that she did not intend to stay. Part of the reason Sybil had stayed with the team was the challenge of seducing Songbird but once rebuffed she saw no reason to stay. Sybil's current whereabouts are unknown. It is also unknown whether she has kept the Skein identity or returned to operating as Gypsy Moth. She retained her powers following M-Day
Decimation (comics)
Decimation is the late 2005 Marvel Comics storyline spinning off from the House of M limited series. It focuses on the ramifications of the Scarlet Witch stripping nearly all of the mutant population of their powers, thereby reducing a society of millions to one of scant hundreds.This event, which...
.

During the events of Marvel's Civil War, Skrull queen Veranke
Veranke
Veranke is a fictional character created by Marvel Comics who serves as the queen of the Skrull empire in the Marvel Universe. She plays a significant role in the events of Secret Invasion as she leads her empire to invade and conquer Earth....
(while impersonating Jessica Drew) used the name Sybil Dvorak as an alias while in hiding.

Skein is revealed as a member of the Initiative's new team for the state of Delaware, the Women Warriors.

Sybil has the ability to telekinetically manipulate materials and objects with her mind. She prefers the soft feel of fiber and similar soft substances, and thus confines her manipulation almost solely to fabrics both organic and inorganic. Sybil can levitate herself to the point that she can practically fly, and uses her costume's wings to glide. She can carry loads weighing no more than her own body weight while airborne.