Encyclopedia
Sint-Amandsberg is a sub-municipality
Municipality
A municipality is essentially an urban administrative division having corporate status and usually powers of self-government. It can also be used to mean the governing body of a municipality. A municipality is a general-purpose administrative subdivision, as opposed to a special-purpose district...
of Ghent
Ghent
Ghent is a city and a municipality located in the Flemish region of Belgium. It is the capital and biggest city of the East Flanders province. The city started as a settlement at the confluence of the Rivers Scheldt and Lys and in the Middle Ages became one of the largest and richest cities of...
, Belgium
Belgium
Belgium , officially the Kingdom of Belgium, is a federal state in Western Europe. It is a founding member of the European Union and hosts the EU's headquarters, and those of several other major international organisations such as NATO.Belgium is also a member of, or affiliated to, many...
. The municipality was formed in 1872 after splitting from Oostakker
Oostakker
Oostakker, formerly spelled Oostacker, is one of the smaller former municipalities which were merged into Ghent , the capital of the Belgian province of East Flanders...
.

During the First World War, on 7 June 1915, the German airschip LZ37 crashed after being destroyed by Reginald Warneford. A street was named Reginald Warnefordstreet in Sint-Amandsberg on the spot where the airship crashed. 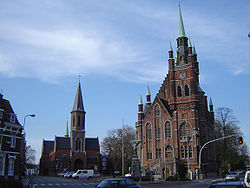