Encyclopedia
Silver bromide a soft, pale-yellow, water insoluble salt well known (along with other silver halides) for its unusual sensitivity to light. This property has allowed silver halides to become the basis of modern photographic materials. AgBr is widely used in photographic films and is believed by some to have been used for making the Shroud of Turin
Shroud of Turin
The Shroud of Turin or Turin Shroud is a linen cloth bearing the image of a man who appears to have suffered physical trauma in a manner consistent with crucifixion. It is kept in the royal chapel of the Cathedral of Saint John the Baptist in Turin, northern Italy. The image on the shroud is...
. The salt can be found naturally as the mineral bromargyrite
Bromargyrite
Bromyrite or bromargyrite is a natural mineral form of silver bromide found mainly in Mexico and Chile. Hardness is 1.5 to 2. Related are chlorargyrite and iodyrite.-References:* *...
(bromyrite).

Although the compound can be found in mineral form, AgBr is typically prepared by the reaction of silver nitrate with an alkali bromide, typically potassium bromide:

Although less convenient, the salt can also be prepared directly from its elements.

Modern preparation of a simple, light-sensitive surface involves forming an emulsion of silver halide crystals in a gelatine, which is then coated on a film or other support. The crystals are formed by precipitation in a controlled environment to produce small, uniform crystals (typically < 1 μm in diameter and containing ~1012 Ag atoms) called grains. 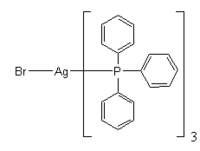 
The larger halide ions are arranged in a cubic close-packing, while the smaller silver ions fill the octahedral gaps between them, giving a 6-coordinate structure where a silver ion Ag+ is surrounded by 6 Br− ions and vice-versa. The coordination geometry for AgBr in the
NaCl structure is unexpected for Ag(I) which typically forms linear, trigonal (3-coordinated Ag) or tetrahedral (4-coordinated Ag) complexes.

Unlike the other silver halides, iodargyrite (AgI) contains a hexagonal zincite lattice structure.

The silver halides have a wide range of solubilities, noting that the solubility of AgF is about 6 × 107 times greater than that of AgI. These differences are attributed to the relative solvation
Solvation
Solvation, also sometimes called dissolution, is the process of attraction and association of molecules of a solvent with molecules or ions of a solute...
enthalpies of the halide ions; the enthalpy of solvation of fluoride is anomalously large.

Although photographic processes have been in development since the mid 1800’s, there were no suitable theoretical explanations until 1938 with the publication of a paper by R.W. Gurney and N.F. Mott. This paper triggered a large amount of research in fields of solid-state chemistry and physics, as well more specifically in silver halide photosensitivity phenomena.

Moreover, further research into this mechanism revealed that the photographic properties of silver halides (in particular AgBr) were a result of deviations from an ideal crystal structure. Factors such as crystal growth, impurities, and surface defects all contribute to affect concentrations of point ionic defects and electronic traps, which subsequently affect the sensitivity to light and allow for the formation of a latent image
Latent image
A latent image on photographic film is an invisible image produced by the exposure of the film to light. When the film is developed, the area that was exposed darkens and forms a visible image...
.

Frenkel defects and quadropolar deformation
The major defect in silver halides is the Frenkel defect
Frenkel defect
The Frenkel Defect is shown by ionic solids. The smaller ion is displaced from its lattice position to an interstitial site. It creates a vacancy defect at its original site and an interstitial defect at its new location.-Definition:...
, where silver ions are located interstitially (Agi+) in high concentration with their corresponding negatively-charged silver ion vacancies (Agv−). What is unique about AgBr Frenkel pairs is that the interstitial Agi+ are exceptionally mobile, and that its concentration in the layer below the grain surface (called the space charge layer) far exceeds that of the intrinsic bulk. The formation energy of the Frenkel pair is low at 1.16 eV
Electronvolt
In physics, the electron volt is a unit of energy equal to approximately joule . By definition, it is equal to the amount of kinetic energy gained by a single unbound electron when it accelerates through an electric potential difference of one volt...
, and the migration activation energy is unusually low at 0.05 eV (compare to NaCl: 2.18 eV for the formation of a Schottky pair and 0.75 eV for cationic migration). These low energies result in large defect concentrations, which can reach near 1% near the melting point.

The cause of the low activation energy in silver bromide can be attributed the silver ions’ high quadrupolar polarizability; that is, it can easily deform from a sphere into an ellipsoid. This property, a result of the d9 electronic configuration of the silver ion, facilitates migration in both the silver ion and in silver ion vacancies, thus giving the unusually low migration energy (for Agv−: 0.29–0.33 eV, compared to 0.65 eV for NaCl).

Impurity concentrations can be controlled by crystal growth or direct addition of impurities to the crystal solutions. Although impurities in the silver bromide lattice are necessary to encourage Frenkel defect formation, studies by Hamilton have shown that after a particular concentration of impurities, the number of defects of interstitial silver ions and positive kinks reduce sharply by several orders of magnitude. After this point, only silver ion vacancy defects, which actually increase by several orders of magnitude, are prominent.

Electron traps and hole traps
When light is incident on the silver halide grain surface, a photoelectron is generated when a halide loses its electron to the conduction band:

After the electron is released, it will combine with an interstitial Agi+ to create a silver metal atom Agi0:

When a photoelectron is mobilized a photohole h• is also formed, which, too, needs to be neutralized. The lifetime of a photohole, however, does not correlate with that of a photoelectron. This detail suggests a different trapping mechanism; Malinowski suggests that the hole traps may be related to defects as a result of impurities. Once trapped, the holes attract mobile, negatively-charged defects in the lattice: the interstitial silver vacancy Agv−:

The formation of the h.Agv lowers its energy sufficiently to stabilize the complex and reduce the probability of ejection of the hole back into the valance band (the equilibrium constant for hole-complex in the interior of the crystal is estimated at 10−4.

Additional investigations on electron- and hole-trapping demonstrated that impurities also can be a significant trapping system. Consequently, interstitial silver ions may not be reduced. Therefore, these traps are actually oss mechanisms and are considered trapping inefficiencies. For example, atmospheric oxygen can interact with photoelectrons to form an O2− species, which can interact with a hole to reverse the complex and undergo recombination. Metal ion impurities such as copper(I), iron(II), and cadmium(II) have demonstrated hole-trapping in silver bromide.

By this reaction equilibrium, the hole-complexes are constantly consumed at the surface, which acts as a sink, until removed from the crystal. This mechanism provides the counterpart to the reduction of the interstitial Agi+ to Agi0, giving an overall equation of:

Latent image formation and photography
Now that some of the theory has been presented, the actual mechanism of the photographic process can now be discussed. To summarize, as a photographic film is subjected to an image, photons incident on the grain produce electrons which interact to yield silver metal. More photons hitting a particular grain will produce a larger concentration of silver atoms, containing between 5 and 50 silver atoms (out of ~1012 atoms), depending on the sensitivity of the emulsion. The film now has a concentration gradient of silver atom specks based upon varying intensity light across its area, producing an invisible "latent image
Latent image
A latent image on photographic film is an invisible image produced by the exposure of the film to light. When the film is developed, the area that was exposed darkens and forms a visible image...
".

While this process is occurring, bromine atoms are being produced at the surface of the crystal. To collect the bromine, a layer on top of the emulsion, called a sensitizer, acts as a bromine acceptor.

During film development the latent image is intensified by addition of a chemical, typically hydroquinone, that selectivity reduces those grains which contain atoms of silver. The process, which is sensitive to temperature and concentration, will completely reduce grains to silver metal, intensifying the latent image on the order of 1010 to 1011. This step demonstrates the advantage and superiority of silver halides over other systems: the latent image, which takes only milliseconds to form and is invisible, is sufficient to produce a full image from it.

After development, the film is "fixed," during which the remaining silver salts are removed to prevent further reduction, leaving the "negative" of the film. The agent used is sodium thiosulphate, and reactions according to the following equation:

An indefinite number of positive prints can be generated from the negative by passing light through it and undergoing the same steps outlined above.

As silver bromide is heated within 100 °C of its melting point, an Arrhenius plot of the ionic conductivity shows the value increasing and "upward-turning." Other physical properties such as elastic moduli, specific heat, and the electronic energy gap also increase, suggesting the crystal is approaching instability. This behavior, typical of a semi-conductor, is attributed to a temperature-dependence of Frenkel defect formation, and, when normalized against the concentration of Frenkel defects, the Arrhenius plot linearizes.
The source of this article is wikipedia, the free encyclopedia.  The text of this article is licensed under the GFDL.